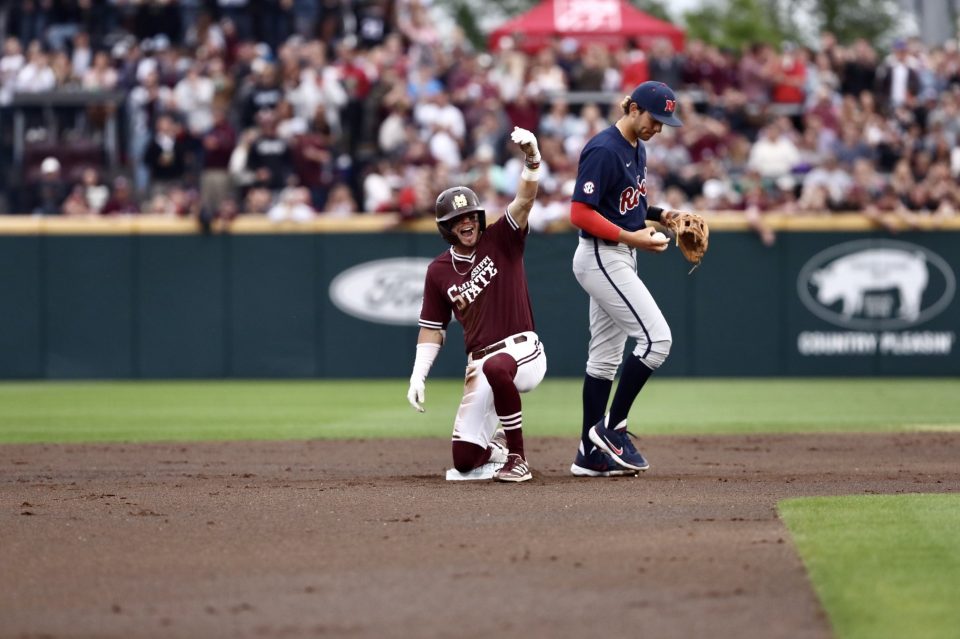 Mississippi State followed its formula on Friday night in Starkville, getting great pitching and timely hitting to take game one of the highly anticipated showdown with Ole Miss 5-2 in front of 10,291 fans.

The two rivals battled to a standstill through five innings, with the Bulldogs striking first in the first, a Kam James single bringing in Tanner Allen. Ole Miss would score an run in the top of the third, with a Peyton Chatangier infield single being misplayed and scoring Cael Baker. The Rebels grabbed a lead in the top of the fourth on a TJ McCants solo home run, which James answered with a bomb of his own deep into the Left Field Lounge.

State would regain the lead for good in the sixth, with Allen ripping a triple into left center, and James bringing him in with a sacrifice fly. The Bulldogs would tack on two insurance runs in the bottom of the eighth, with Rowdey Jordan scoring Scotty Dubrule with a single, then James with another sac fly scoring Jordan for his 4th RBI of the game.

Christian MacLeod was solid but not spectacular, going five innings for the maroon and white, giving up 2 runs on 4 hits with 5 strikeouts and 2 walks. Preston Johnson, who struggled a week ago at Auburn, was very effective in middle relief, striking out 4 batters in 2 scoreless innings. Landon Sims shut the door on the Rebels with a six out save, his fourth of the season.

The final out from Starkville. Mississippi State takes game one from Ole Miss 5-2. pic.twitter.com/bPPWaSpz0d

State improves to 26-7 on the season, 9-4 in the SEC, now sitting on 9 straight wins, 7 straight in conference play. The Bulldogs will look to take the series tomorrow with Will Bednar on the mound, first pitch at Dudy Noble is scheduled for 2 PM.