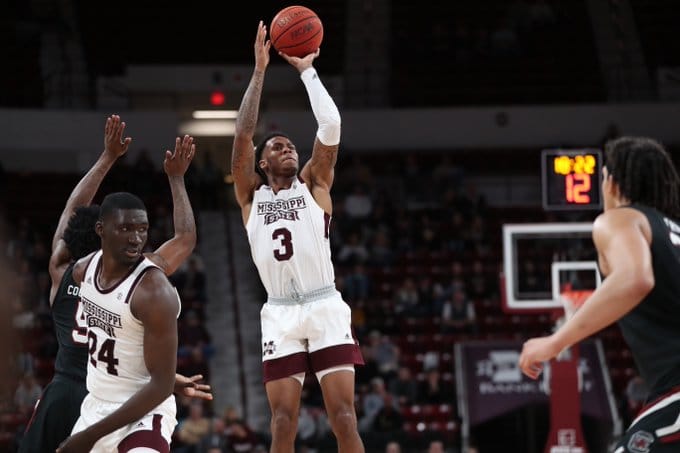 Playing a Frank Martin coached team is like getting a root canal, so said Ben Howland following his Mississippi State team’s 79-76 win over South Carolina. The Bulldogs cooled off the Gamecocks, who came into [Wednesday’s] game as the hottest team in the SEC, and kept their own tournament hopes very much alive. On a night where Reggie Perry struggled against the physical Gamecock front line, it was Abdul Ado who put the team on his shoulders in the first half. Ado finished the night with 14 points and 7 rebounds, and State’s backcourt thrived, with Nick Weatherspoon and DJ Stewart combining for 34 points. Even with his troubles, Perry registered his 14th double-double of the season, getting 10 and 10 in the contest.

Coming off the game-winning play last Saturday against Arkansas, Abdul Ado put together perhaps his best game as a Bulldog. When South Carolina’s defense frustrated Reggie Perry, it was Ado who picked the team up, scoring 10 points and grabbing three offensive rebounds to help MSU keep a lead throughout the first 20 minutes. Ado has been a nice role player for the Bulldogs this season, but he showed tonight he can evolve his game if needed.

DJ Stewart continues to show he is one of the top clutch shooters in the league, hitting 5-7 from the field tonight, including a huge three-pointer in transition after South Carolina had cut the MSU lead to 4. Stewart’s emergence has been important as Tyson Carter has continued to be inconsistent throughout conference play.

Mississippi State will travel to what will be another must-win game, this time taking on a Texas A&M team that has overachieved all season. Tipoff is set for Saturday at 2:30 in College Station, A&M is currently ranked 134 in the NET, so a loss would be devastating for State’s tournament hopes.