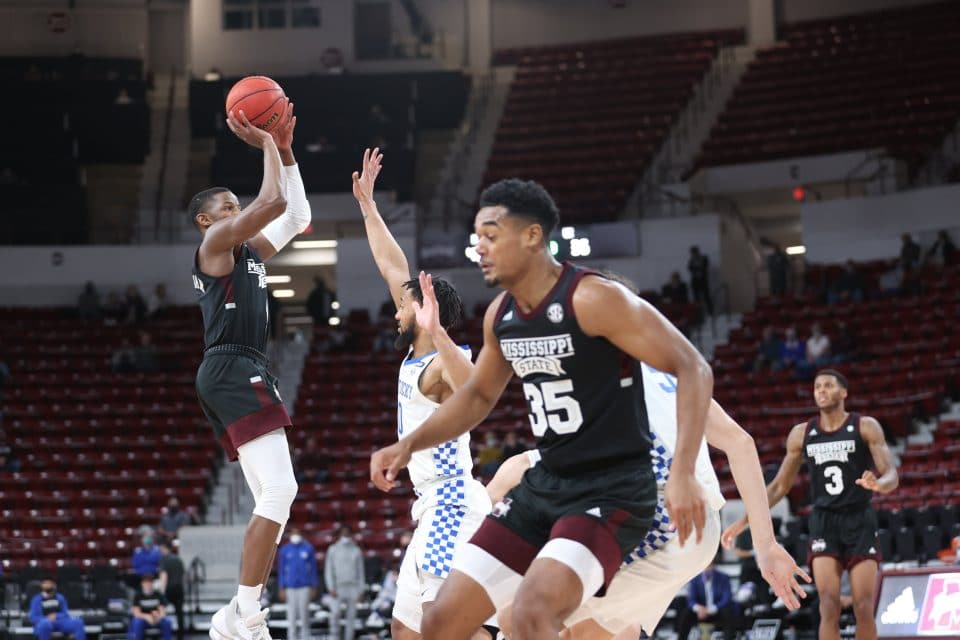 With 9:04 left in the second half, Mississippi State’s Jalen Johnson hit his third free throw out of four technical shots, stemming from the ejection of Kentucky head coach John Calipari. The Bulldogs held a 55-46 lead, and looked to be on the verge of delivering the knockout blow against the Wildcats. Instead, Kentucky clawed its way back into the game despite missing their leader, and ending up taking a 78-73 win in double overtime.

Mississippi State had a great chance to get the win in the first overtime period, when a Wildcat turnover gave them the ball back with fifteen seconds to go, but Iverson Molinar was unable to get a shot off before the buzzer. Kentucky left no doubt in the final five minutes, starting on an 8-2 run and finally wresting control of the game away from Ben Howland’s squad.

State was led by DJ Stewart with 19 points, Molinar with 17, and Jalen Johnson with 14. It was a rough night for the Bulldog big men, as Tolu Smith shot 2-11 from the field as the Kentucky length down low bothered him all game long. Kentucky was led by redshirt fresman Dontaie Allen, who came into the night only having scored four points all year. Allen would scorch the nets for 23 points, including a gaudy 7-11 shooting from behind the three point line. The Wildcat bench was a huge difference, outscoring the Bulldog reserves 33-11.

Onions from @dontaieallen11 to get us to overtime.

Can we get another one?

State falls to 6-4 on the campaign, 1-1 in the SEC. The Bulldogs will be back in action Tuesday night when they’ll take on Missouri, with the Tigers currently ranked 12th in the AP College Basketball Top 25.