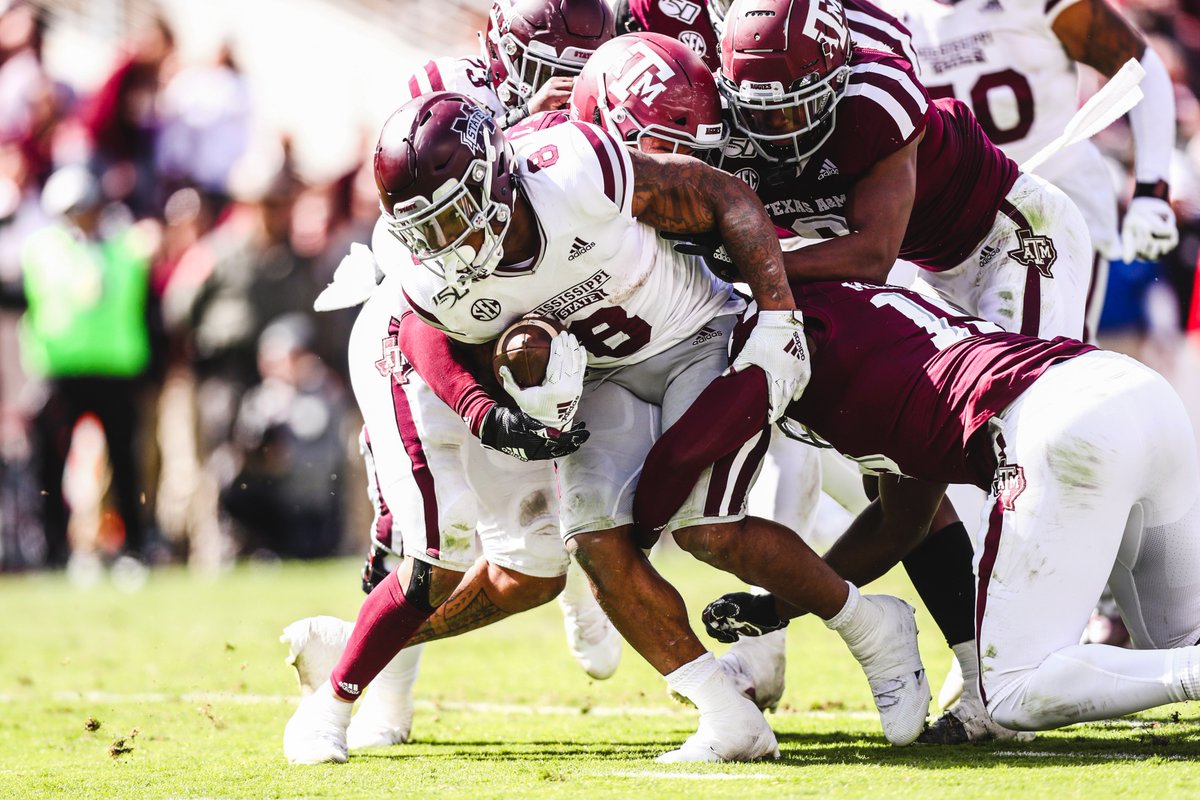 Mississippi State’s roster has been thinned all season due to the suspensions stemming from the NCAA investigation into academic improprieties. Adding injuries to key starters made the task of winning at Texas A&M all but impossible, and the Aggies were able to punish the depleted Bulldogs to the tune of a 49-30 defeat.

State was without two starting offensive linemen in Stewart Reese and Greg Eiland, and both starting cornerbacks in Cam Dantzler and Maurice Smitherman, the latter out for the season. State allowed A&M to roll up 441 yards of offense, and the Aggies capitalized on three Bulldog turnovers to push out to an 28-10 lead going into the halftime locker room.

Garrett Shrader struggled in the air, going 13-30 with a pick, but throwing three touchdowns, including grad transfer Isaiah Zuber’s first two scores of the season. Kylin Hill was the lone bright spot for the Bulldogs, shaking off his recent funk for 151 yards and a touchdown on the day. The Bulldogs fall to 3-5, 1-4 in the SEC, suffering through their first four game losing streak since 2005.

Been a long time since I’ve seen Bull In The Ring. pic.twitter.com/tZNHhDRomZ

Bull in the Ring is a drill us older folks who played the sport will certainly remember, but it has been banned across many states, and is generally not done by most teams. To see it happening in pre-game was a big surprise, especially with the recent rash of injuries Mississippi State has suffered. Perhaps Joe Moorhead wanted his team energized for a big game, or perhaps the team just wanted to give themselves some juice. Either way, it’s a risky move and one that simply adds to the list of questions regarding preparation of this squad.

Mississippi State desperately needed Kylin Hill to show the form he displayed in the season’s first month, and the junior delivered, tagging the Aggies for 151 yards and a score. Hill was able to give Joe Moorhead’s offense the explosive plays he craves on Saturday, and Hill himself attributed it getting back to his more familiar style. “I changed my running style a little bit from previous games, I was trying to be finessed, I got out there and hit the hole with power like I have always been doing.” Hill did look a lot more like the back we saw run up four straight 100 plus yard efforts to start the season. IF the Bulldogs are going to keep their bowl streak alive, they’ll need Hill to deliver again in the season’s final month.

Mississippi State will travel to Arkansas for what is a must-win game for the Bulldogs’ flickering bowl hopes. A loss would seal their doom, with #1 Alabama slated to come to Starkville the following week in what would surely be State’s seventh loss in those circumstances. MSU must win against the Razorbacks, Abilene Christian, and Ole Miss to get that all-important sixth win. Kickoff with the Hogs is scheduled for 3 PM on the SEC Network.

USM Defense Paves the Way for 20-6 Win over Rice