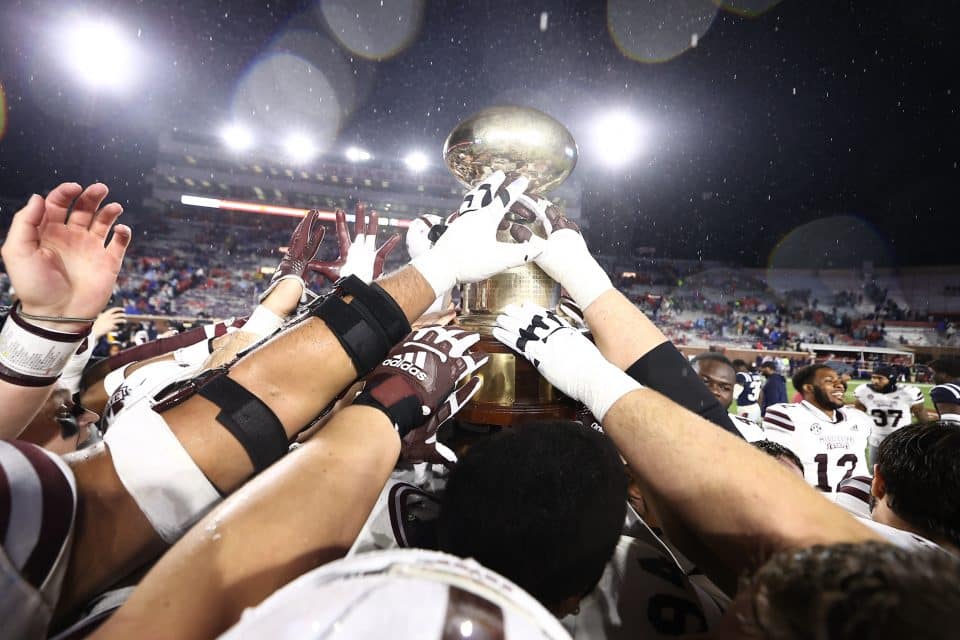 It was a game that neither team seem to want to win, as mistakes piled up and miscues kept happening. In the end, it was Mississippi State who found the way to victory, taking the Golden Egg trophy back to Starkville following a 24-22 win over their bitter rivals from Ole Miss.

State turned the ball over three times, including on the Ole Miss 1 yard line as they seemed to be driving for a game clinching score. The Bulldogs allowed 4 sacks, and Will Rogers spent most of the night evading pressure. Despite all that, State’s defense dominated the line of scrimmage, holding the SEC’s leading rushing attack to a measly 74 yards on 38 carries, and the Bulldog running back duo of Woody Marks and Dillon Johnson combined for 149 yards on the ground. Rogers did account for two touchdown passes, the second to a wide open RaRa Thomas that gave the Bulldogs a crucial 8 point lead.

Following that score, the Bulldogs recovered a fumble at the Rebel 30 yard line and seemed poised to put the game away. Rogers would fumble it back to the Rebels at the 1, and Ole Miss would embark on a sensational 15 play, 99 yard drive to put themselves within two. The two point conversion was broken up by Bulldog defensive end Randy Charlton, leaving the Rebels no choice but to onside kick, which State recovered to run out the clock.

State improves to 8-4 on the season, and now awaits it’s bowl destination. Ole Miss also stands at 8-4, dropping 4 of their final 5 games to close out the campaign.