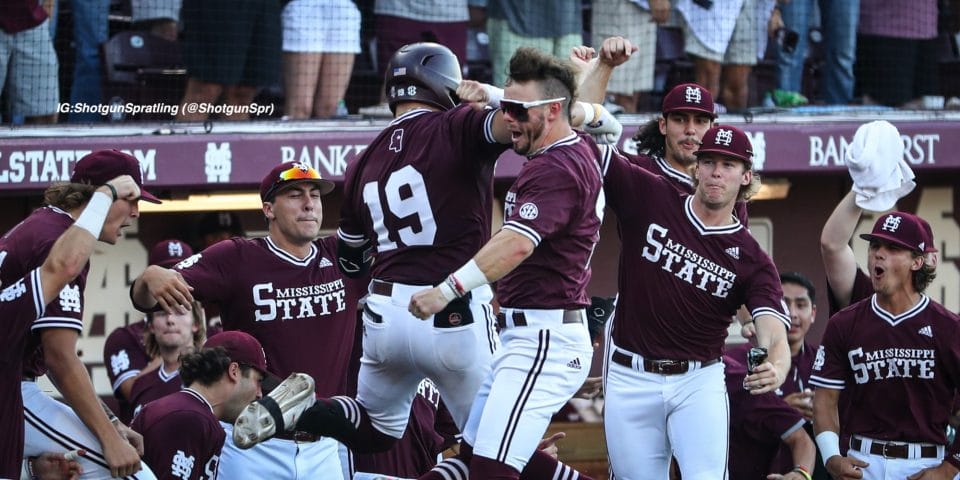 Mississippi State wanted there to be no doubt about a return trip to the College World Series, and the Bulldogs made a fast start the first thing on their agenda, taking a 7-1 lead in the second inning, leading to an 11-7 win over Notre Dame that saw State punch its ticket for Omaha for the 12th time in school history and the third straight season.

Notre Dame actually struck first in the deciding contest, taking a 1-0 lead on a Ryan Cole solo home run in the top of the opening inning. State would come back to tie it in the bottom half of the frame, then would cash in for six runs in the bottom of the second, the big blow being a three run blast to center by Logan Tanner.

Got The Dude on its feet 👋 pic.twitter.com/9qFLqtz7Kb

State would add five more runs over the next three innings, with Notre Dame cutting the lead to 10-5 in the top of the fifth before a Scotty Dubrule single would score Tanner to push the lead to 11-5. The Irish would continue to fight, with their top slugger Niko Kavadas finally getting a big hit, a two run tank to deep right field that appeared to leave the park entirely.

When they say “playing angry”…this is what they’re talking about. 😨pic.twitter.com/uieQTkBuJx

State would turn the game over to their All-American closer Landon Sims in the sixth inning, and aside from that home run, he dominated the Irish batters. Notre Dame would get two on to start the top of the ninth, but a strikeout then a ground ball from Kavadas that lead to a double play finished the ball game and sent the team and fans in attendance into a frenzy.

State finishes the regular season 45-16, and will head to Omaha for the third consecutive time. The Bulldogs will take on Texas Sunday night at Rosenblatt Stadium, first pitch is scheduled for 6 PM central time.