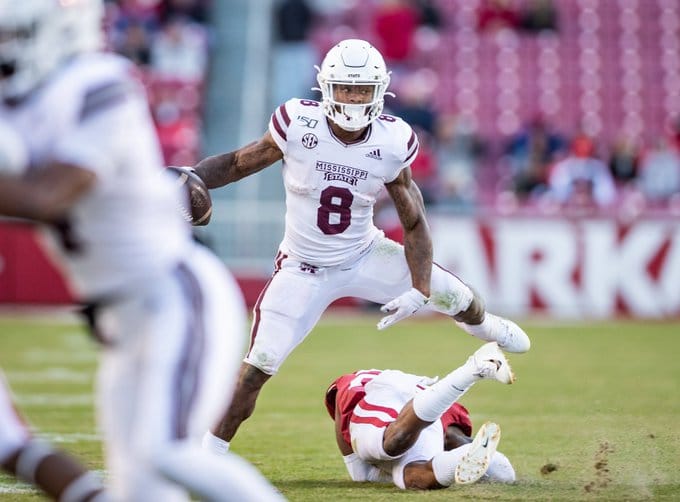 Everything Mississippi State had been lacking during its four-game losing streak suddenly showed up in Fayetteville Saturday, as the Bulldogs turned a quick start and two Arkansas turnovers into an easy win, taking down the Razorbacks 54-24 in a record-setting day for Joe Moorhead’s offense.

The Bulldogs set a new school mark for rushing yards in an SEC game, piling up 460 on the ground, with 234 of those coming from the shoulders of Kylin Hill. Hill gashed the Razorback defense from the first quarter until he was finally relieved by Nick Gibson, who proceeded to gain 129 yards of his own. State was sparked by a return of Tommy Stevens to the starting lineup, in place of an ill Garrett Shrader. Stevens would account for 246 total yards and 2 scores, looking much like the polished passer we saw prior to his injury in week two of the season.

KYLIN HILL WHAT A RUN pic.twitter.com/oaXVQi65LO

Kylin Hill took off for a 61 yard gain on the third play from scrimmage Saturday afternoon, and he never looked back from there. Hill displayed both the ability to break through the line with physicality and the burst to get outside and take the corner against an outmatched Arkansas defense. This was Hill’s second 200-yard rushing game in his MSU career, and his sixth game this season alone in triple digits. After a three-game lull, Hill has put together back to back solid games for the first time since September. If the Bulldogs are going to cash in a 10th straight trip to the postseason, Hill will be the biggest factor as to why.

STEVENS BACK IN THE MIX

Murmurs began to circulate as Mississippi State concluded warmups that Tommy Stevens would be making his return to the starting lineup. Stevens was in complete control, showing no signs of rust as he both passed and rushed the Bulldogs to 17 first-quarter points, giving Joe Moorhead the fast start his team had been missing all season long. Moorhead was non-committal in postgame as to whether or not this could be a permanent move, rather taking the stance to let the bye week come and go and make a decision closer to kickoff against Alabama on November 16.

A quick Twitter search of #FireChadMorris will net you a few thousand results after he presided over his 14th straight SEC defeat as head coach of the Razorbacks. Simply put, Arkansas is not a good football team, and even against a Mississippi State team that has been down and out for weeks, they were completely overwhelmed. It will be very surprising if the Hogs don’t make it 0-16 for Morris’ tenure, with dates remaining against LSU and Missouri. If the Hogs can’t knock off Western Kentucky and quarterback Ty Storey, who transferred from Fayetteville to Bowling Green, it might be time for Morris to start updating the old resume.

Mississippi State will either catch Alabama coming off a huge win or a crushing loss, as the Crimson Tide comes to Starkville after next weekend’s titanic showdown with LSU. We’ll see if Joe Moorhead can pull off the biggest upset of the season on November 16. State must win two of its final three to clinch a 10th straight bowl bid.

Mississippi State Runs All Over Arkansas in 54-24 Road Win