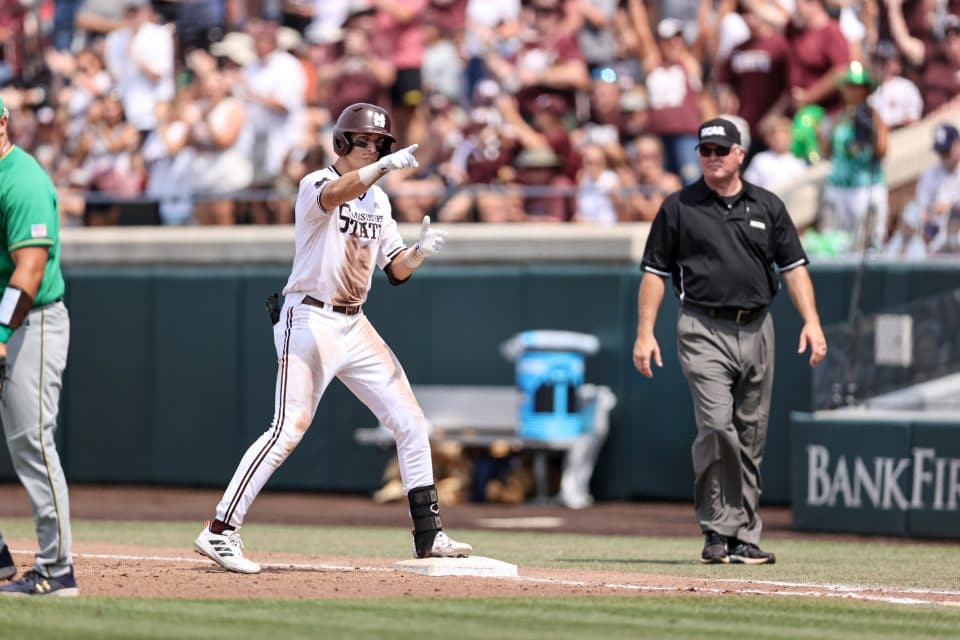 Mississippi State baseball is known for many things, big crowds and dramatic games being among them. Saturday’s Super Regional opener with Notre Dame provided both, as the teams went back and forth in front of a NCAA record 14,385, with the Bulldogs coming out on top by a 9-8 margin.

Notre Dame would strike first, scoring a run in each of the first four innings to take a 4-3 lead into the fifth. In that frame, the Irish would appear to break the game open with a three run home run from Zack Prajzner to take a 7-3 lead. State would answer with three in the bottom half of the frame to get back into the contest, with Kam James starting the rally with an RBI single.

State would take the lead in the bottom half of the sixth, following their first 1-2-3 stanza, on a two run blast by Rowdey Jordan. Jordan was 3-5 on the day with 2 RBI and 3 runs scored. The home run brought a delayed reaction to the massive Dudy Noble crowd, as Irish centerfielder Spencer Myers crashed into the wall going for the catch, getting up to reveal he did not have the ball.

After Notre Dame tied the game back up in the bottom of the seventh, Bulldog catcher Logan Tanner gave State the lead for good with the game’s fifth home run, an opposite field job that put State back on top 9-8.

Preston Johnson gets the win for the Bulldogs, with Landon Sims pitching two perfect innings of relief to get his 10th save of the season. Notre Dame committed 4 errors in the game, a huge departure from the nation’s top ranked fielding percentage.

State will look to close out the series and advance to the College World Series tomorrow, with first pitch scheduled for 5 PM. The Bulldogs will throw Christian MacLeod, Notre Dame has not announced its starter. If the Irish can win, Game Three will be at 6 PM on Monday.