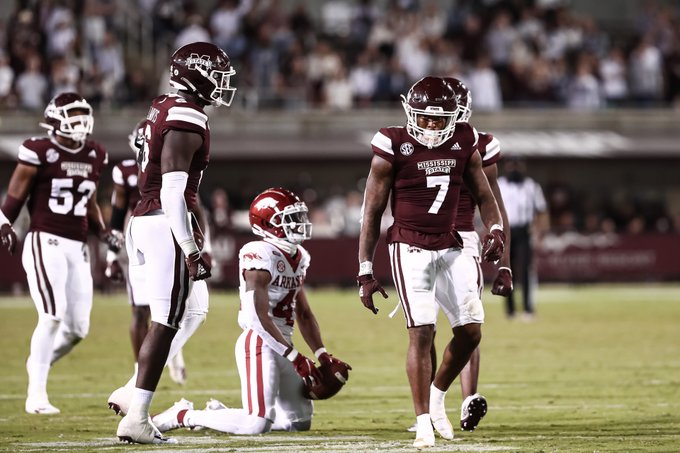 A week ago, Mississippi State was on top of the world, as the Air Raid offense laid waste to the defending national champions LSU. This week, the high flying attack fell back to earth, as Arkansas took advantage of four Bulldog turnovers and stymied KJ Costello in a 21-14 win over the Bulldogs. Costello was unable to duplicate his record-setting night in Baton Rouge, throwing for just more than half of last week’s total, 313 yards. He also threw three interceptions, the first of which was returned for a touchdown to give the Razorbacks an early lead.

State would tie it up on a Costello pass to JaVonta Payton, but Arkansas would regain the lead in the second quarter with Feleipe Franks finding a busted coverage for a 19 yard score to Devion Warren.

Strollin’ in for six pic.twitter.com/EN80xFZ2bU

Arkansas would extend the lead on their first possession of the third quarter, but from there, the Bulldog defense tightened up. State ended up only surrending 275 yards, and forced the Razorbacks into punts on five of their final six possessions, with the other drive ending with a fumble recovery by Aaron Brule. State got within a score in the third quarter, as freshman Dillon Johnson, in for an injured Kylin Hill, scored from six yards out.

MSU would keep momentum, driving into Arkansas territory on their next possession, but Costello’s third interception killed the drive. Following that, MSU would turn the ball over downs on consecutive possessions, including an incomplete pass on a fourth and one that had Bulldog fans slamming their cowbells into the Davis Wade Stadium stands.

There is your first Mike Leach 4th and 1 pass, its incomplete and MSU squanders the turnover.

My question, there’s 9 minutes left and you have momentum. Why not kick the FG?

State could never get the breakthrough, and the game was salted away when freshman Jaden Walley fumbled a punt away with 2:35 remaining. The Bulldogs got one more shot with 25 seconds to go, but it was too little, too late. The win ends a 20 game losing streak in the SEC for Arkansas, who join the Bulldogs at 1-1 on the young campaign. State will look to rebound next week as they travel to Lexington for a meeting with the Kentucky Wildcats.