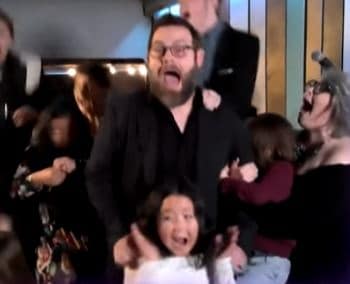 Image courtesy of "The Voice"

Tuesday night’s episode of The Voice had many Mississippians glued to the edge of our seats because we were cheering on one of our own!

We are so proud that Todd Tilghman of Meridian has claimed the Season 18 championship title.

If you missed his finale performance, this will definitely warm your heart.

The 41-year-old pastor of Cornerstone Church in Meridian, and his wife Brooke are the parents of eight children; six biological, and two are adopted from South Korea.

In Brooke’s Instagram profile, she describes herself as, “Lover of Jesus, wife of a bearded man, and mama to EIGHT extraordinary humans.”

Who wouldn’t fall in love with this family?

On Tuesday night’s finale, following Todd’s performance of Mercy Me’s, “I Can Only Imagine”, judge Kelly Clarkson was moved to tears.  Clarkson said, “You are so moving, and it’s because you are a pastor.  You have such a bigger belief inside of you than just yourself.”  Clarkson also added that she would love to come to Tilghman’s church to hear him not only sing but also speak.  “You are very special”, said Clarkson.

Tilghman’s coach Blake Shelton echoed Clarkson’s sentiments.  “You know Todd, what she’s saying is true. The connection you have with people and your talent speaks for itself.”  Shelton continued by saying, “You sing with so much passion, so much precision, you’re just a special dude, man.  America agrees that’s why you’re in this finale, so congratulations on another great performance.”

Finally, the time came to announce the winner and it was obvious the Tilghman family was overcome with joy!

Tilghman, who walked away with a $100,000 prize and a record deal, addressed friends, family, and fans via Facebook after the competition.

We will look forward to watching Todd use his God-given talents as he continues to touch the world.