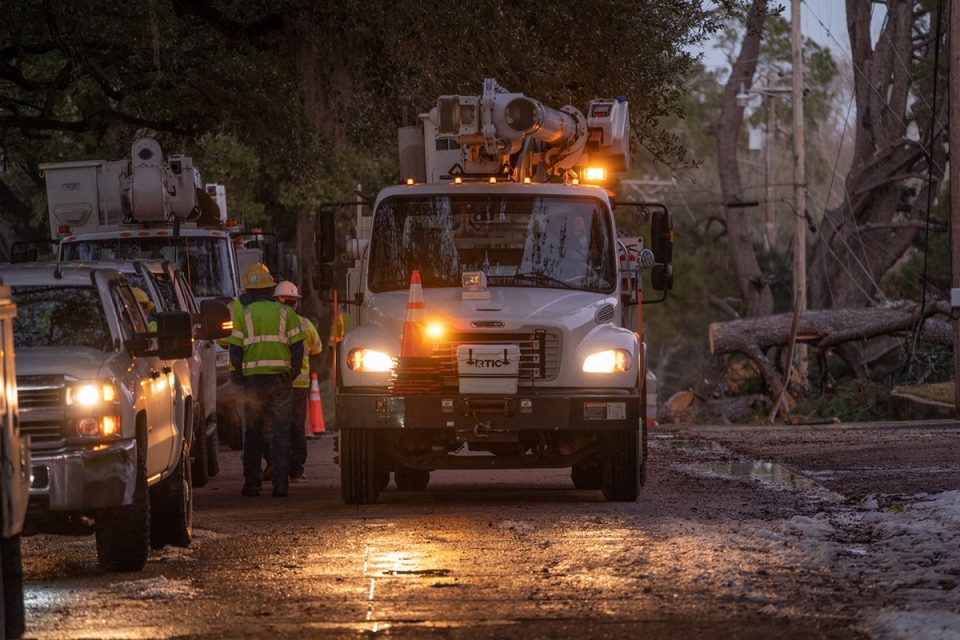 Sadly, two storm-related fatalities have been confirmed.  Both occurred in George County after a road washed away causing seven vehicles to plunge 20 to 30 feet.  10 people were injured – 3 critically.

Statewide, Reeves said, there were 20 confirmed water rescues, but as the data comes in, he believes there will be more.

After the storm hit, over 100-thousand power outages were reported throughout the state.  Reeves said that number has decreased to 37-thousand with the bulk of the outages in Pike, Walthall, Wilkinson, and Amite counties – mainly in rural areas.

Reeves recognized the linemen and women for their hard work and dedication. “There are many heroes in these large disasters, but our linemen and linewomen are certainly at the very top because they’re the ones who get out in the storms and actually restore power.  Given the heat advisories we’re under, getting power back to the homes so residents can have air conditioning, is very important.”

With regards to fuel availability, Reeves noted that all petroleum facilities are back on line. “The Chevron facilities in Pascagoula and Collins are functioning. We are seeing significant increases in Louisiana residents coming to Mississippi for gasoline, causing excess traffic on the coast and longer lines for fuel.  I encourage everyone to be patient.”

Reeves said the ports at Pascagoula and Gulfport are back to normal status.  He noted that Port Bienville at Bay St. Louis should resume normal status soon.

Reeves said, during the storm, 28 shelters were open with 600 occupants. Currently, three shelters are open with 44 occupants. “Now, we know, as we look at what’s happening in Louisiana that there may be needs going forward.  We are coordinating with our partners in Louisiana and with the American Red Cross as to what our plan should be to house any Louisiana residents that need it.”

Reeves said, in Mississippi, over 200-thousand sandbags have been distributed, along with 52 pallets of bottled water, one pallet of MRE’s, three generators, 9 pallets of shelter PPE packs, and over 600 tarps.

Mississippi has established a Hurricane Ida assistance line.  If you are a Mississippi resident in need of assistance, call 1-888-574-3583, Monday through Friday from 8 a.m. to 7 p.m., or you can visit www.msema.org

“For as long as we have been dealing with natural disasters that come our way, we have dealt with FEMA, a federal agency that recognizes that the Stafford Act calls for these disasters to be state-managed, locally executed, and federally supported,” said Reeves. “I’m here to tell all 3-million of my fellow Mississippians, that in this particular disaster, and those that have come before, that our partners at the Federal Emergency Management Agency (FEMA) have done just that.  They have been here to meet every request that we have had, and we sincerely appreciate their teamwork and assistance as we navigate through this.”

FEMA Administrator Deanne Criswell provided an update on federal response efforts in Mississippi. “Currently, we are moving two ambulance strike teams into Harrison County, and we have additional ambulances that are staged at the fairgrounds in Jackson ready to provide support as needed. In addition, a U.S. Army Corps of Engineers temporary power team is staged at Camp Shelby.”

“I believe in my heart that Mississippi has the best Emergency Management Agency in America,” said Reeves. “Every one of these men and women who work here, and all of our sister agencies throughout the state, make me proud to be a Mississippian.  They step up.  There is no such thing as Monday through Friday or 9 to 4.  These jobs are literally 24 hours a day, seven days a week.”

McCraney added, “We’re distributing water, food, and ice as necessary today to those counties that have been impacted. We are not done, by any means – recovery is the longer phase.”

Reeves said he has spoken to Louisiana Governor John Bel Edwards often over the last several days. “We are deploying some resources at their request including a Military Police Company and an Engineering Company from the Mississippi National Guard.”

In addition, Reeves said, “We have a significant number of firefighters, primarily from the fire academy, in addition to some from Central Mississippi fire departments who have already deployed.”

The Governor’s complete press conference from Wednesday, September 1, 2021 is available below: