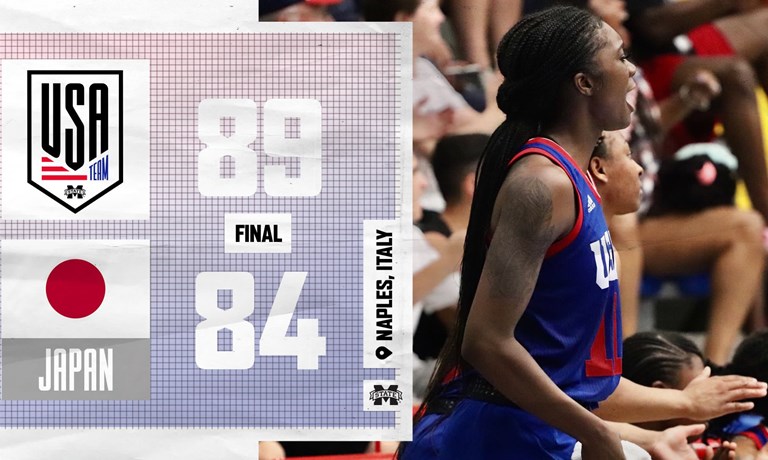 Mississippi State University’s women’s basketball team are representing the United States of America at the World University Games in Naples, Italy. The team of Lady Bulldogs have already won against Mexico, Chinese Taipei, Slovakia, China and most recently Japan.

Facing a double-digit deficit late in the third quarter, USA Team once again found a way to come from behind to get the victory, defeating Japan, 89-84, to advance to the Gold Medal match of the World University Games.

“There are people in this profession and players who play their whole career that don’t get this kind of opportunity,” said head coach Vic Schaefer. “I’m really happy for our players. I don’t know that I have ever seen a more resilient team that can bow their necks and show the toughness that they have shown. On top of that, they continue to do it in the hardest quarter, which is the fourth quarter.”

The U.S. will play Australia in the finals on Wednesday at 1 p.m. CT. The game will be streamed live online by FISU TV. Australia, who is 5-0 during the event, won the gold medal in the last WUG. The Aussies defeated Portugal in the other semifinal game, 56-49, to advance to the finals once again.

During the game against Japan, Team USA fought back from a halftime deficit to cut Japan’s lead to 62-61 with 6:04 left in the third period. However, Japan responded with a run of its own to match its largest lead of the game at 73-63 with 2:19 left in the quarter.

After a timeout by Schaefer, the U.S. cut it to a one-possession game at 73-70 going into the final quarter. Trailing by five with five minutes left to play, USA Team’s stepped up big, holding Japan to just one basket for the remainder of the game.

Meanwhile, the offense slowly clawed its way back until Jessika Carter grabbed an offensive rebound and scored the go-ahead bucket to make it 82-81. Two possessions later, Andra Espinoza-Hunter stepped up and hit a massive 3-pointer to make it a four-point game.

The Red, White, and Blue used a 9-0 run to swing the momentum of the game and take an 85-81 lead. From there, the U.S. held on to its lead and earned a spot in the finals.

“I thought our kids were so special,” said Schaefer. “How about our two freshmen Jayla Hemingway and JaMya Mingo-Young. They both played 20 minutes and had big minutes for us. Myah Taylor was really good off the bench tonight. Yemiyah came off the bench and had a heck of a game for us again. We had a lot of people step up tonight. Andi hit a big three and then makes two big defensive plays for us that really helped us end the game the right way. This team is really special.”

“For me, I have one more game with Jazzmun Holmes. She is the best that I think I have ever coached at the point guard spot. I’m going to really look forward to coaching her one more time. She’s done a great job with this team. I know she will play her heart out and lead this team to what will hopefully be a gold medal.”

Rickea Jackson led all scorers with 28 points on 12-of-23 shooting to go along with six rebounds and three steals. Yemiyah Morris came off the bench and played 18 minutes, finishing with 14 points, eight rebounds, and three blocks. Hemingway and Xaria Wiggins rounded out the double-digit scorers for the squad, recording 13 points and 11 points, respectively.

Japan came out hot in the first half, shooting 46 percent from the floor and knocking down five 3-points. Japan took a 10-point lead early on in the first quarter, but the U.S. was able to pull within four points to make it a 26-22 game.

In the second period, Jackson caught fire, scoring 12 of her 18 points for the half. Morris posted a strong half off the bench, recording 12 points and six rebounds. While USA Team shot 45 percent from the field for the first half, Japan continued to find success on offense, dropping 30 points in the second period. Japan entered halftime with a 56-48 lead.

In the second half, the Red, White and Blue played solid defense, holding Japan to just 28 points, 30 percent shooting from the field and 0-for-10 from beyond the arc. For the game, USA Team shot 48 percent from the floor.

Day 5 and escapees are still on the run

Thunder & Lightning: What Are Mississippi State’s Keys to Upsetting Kentucky?