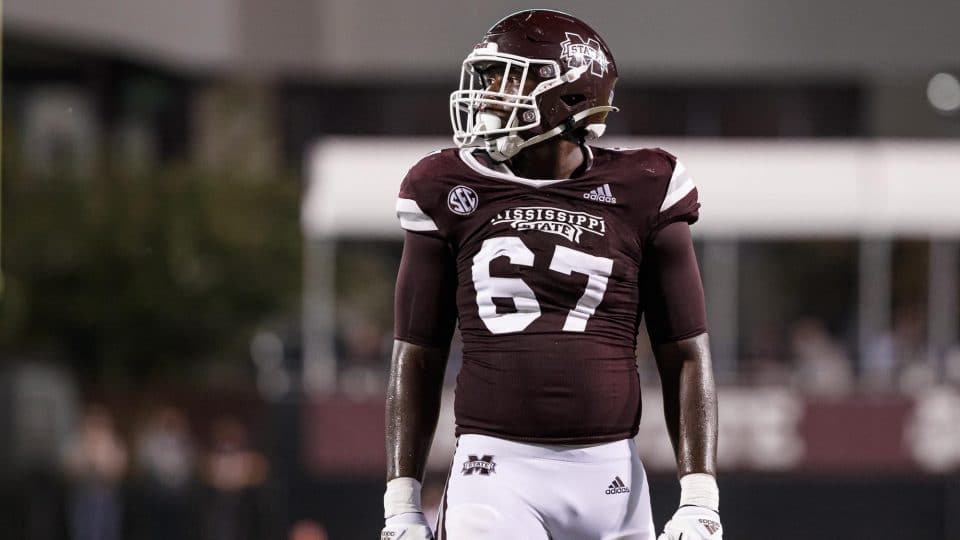 Charles Cross was named a consensus All-American after not giving up a sack in 2021 (Photo courtesy of Mississippi State Athletics).

In his latest NFL mock draft, Josh Edwards of CBS has a couple of Mississippi prospects going in the first round.

First off (literally), Edwards projects Mississippi State offensive lineman Charles Cross to be taken by the Jacksonville Jaguars with the first overall pick in the draft.

“Evan Neal is not the unanimous top offensive tackle, so why is it out of the realm of possibility that Jacksonville might take Cross? He is just a sophomore but has produced some of the best moments of any lineman this season. If he can find that production consistently, there is a good chance that he walks away as the best tackle to come from this class,” he wrote.

The 6-foot-5 310 pounder was named a first-team All-American after not giving up a single sack all season.

Edwards also has Ole Miss quarterback Matt Corral going in the first round to no other than the New Orleans Saints at No. 18.

“Sean Payton is an ideal fit for any young quarterback because he offers a master class on how to play the position. Corral has spent all season making quick decisions in Lane Kiffin’s offense and has done a much better job of taking care of the football,” Edwards wrote, adding that he and others have talked extensively about the best fit for Corral.

Corral finished the 2021 season with 3,963 total yards and 31 touchdowns with five interceptions. While the California gunslinger wasn’t named a consensus All-American, he was voted second-team All-SEC and is ranked as CBS’ No. 1 quarterback.

If Edwards is correct about Cross, he will be the first Bulldog ever to be drafted No. 1 overall. The 2022 NFL Draft is expected to be held from April 28-30 in Paradise, Nevada.