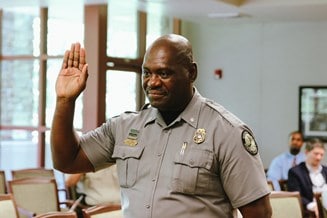 A new chief has been sworn in to the lead the Law Enforcement Bureau within the Mississippi Department of Wildlife, Fisheries and Parks.

Lt. Col. Jerry Carter has been promoted to Colonel as he assumes the responsibility of overseeing the daily operations of the organization which includes 160 sworn officers deployed statewide.

A Leflore County native and U.S. Army veteran, Colonel Carter began his career with the department in 1988 as a Conservation Officer and moved through the ranks having served in various county enforcement, and leadership capacities. His previous assignments include Boater/Hunter Education Administrator, Coordinator of Communications, Commander of the Honor Guard, Emergency Management Coordinator, and Commander of the North Mississippi Law Enforcement Region.

“I am truly grateful for this opportunity afforded me by the Executive Director Dr. Sam Polles, and my predecessor Colonel Steve Adcock, and the trust placed in me to move the Law Enforcement Bureau forward. I am totally committed to the agency’s mission, and to providing quality law enforcement services to the citizenry of our Great State” Carter said.

Col. Carter also makes history as the first African American to serve as Chief of the agency’s Law Enforcement Bureau since its inception in 1932.