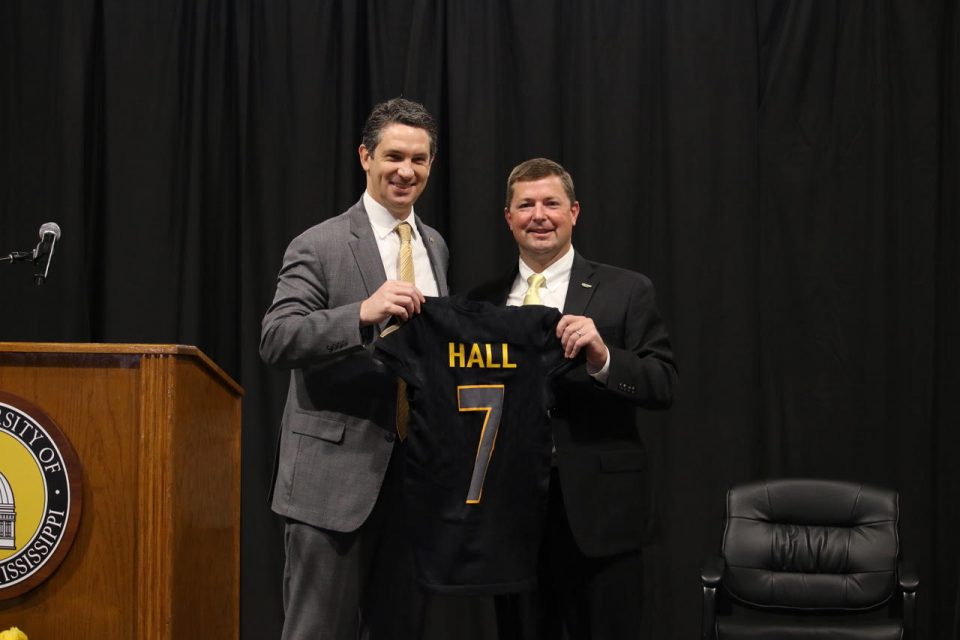 After going through three different acting head coaches this season, Southern Miss football has finally found its new leader in Will Hall.

Hall, who most recently served as the offensive coordinator at Tulane, was officially announced on Monday as the university’s 22nd head coach, and the Amory native is stoked to be heading back to his home state.

“I’ve always wanted [this job],” Hall said. “The time that I grew up in Mississippi, Coach Bower had this thing rolling, and man, y’all know I grew up in Amory. We were black and gold.”

During the 2020 season, Hall has guided the Green Wave to over 390 yards and 35 points per game en route to a 6-5 record. Throughout his last three stops as an assistant coach, offensive records have been broken everywhere he’s been, and he plans for that trend to continue at Southern Miss.

“One thing that I have always been is really good on offense,” Hall explained. “We’ve been really efficient, we’ve broke school records everywhere I’ve been, and I think Southern Miss fans can get excited to know that that’s going to happen.”

Even though it’s natural to assume, simply based on statistics, that Hall leans toward a rush-heavy offense, the Delta State alum made it clear that the ball will, in fact, be aired out in Hattiesburg.

“At Tulane, everybody was saying, ‘he’s a run-the-ball coach.’ Well, at Tulane, I inherited a program that had been running option out of the gun, so we were transitioning to throw the ball more and more, as you see through the two years, and we did,” Hall said. “What you’re going to see here at Southern Miss is that we have a team that has a lot of really good wide receivers and has some good young backs, so I think you’ll see early on us throwing it around a little more than what we did at Tulane.”

Recruiting-wise, Hall wants to take advantage of the talent in southern states, but especially in Mississippi, a state that produces the seventh-highest percentage of FBS players as of 2015.

“You can win with Mississippi kids, Alabama kids, southeast Louisiana kids, panhandle Florida kids,” Hall explained as the early signing period is just nine day away. “The good thing on that is the area that I’ve been recruiting in my past are areas that are in the Southern Miss footprint, so I already know a lot about a lot of local kids that are nearby. And, most of those kids have been to campus before, so we think we’re going to be able to recruit the right type of kids that fit the program in a short amount of time without making mistakes.”

Speaking of top recruits from the Magnolia State, speculation has suggested that pro-style quarterback Ty Keyes of Taylorsville, who is ranked as the state’s sixth-best player, could be following Hall to Hattiesburg after his recent decommitment from Tulane. He even received some friendly encouragement from Southern Miss standout running back Frank Gore, Jr. on Sunday afternoon.

Even if Keyes doesn’t commit to the Golden Eagles, Hall foresees some good competition behind center going into the fall of 2021.

“We’ve got a few here that can do some things, and we are planning on bringing in some more to create some competition,” he said.

Regarding the coaching staff that will be coming along with Hall, the only known assistant, as of now, is Austin Armstrong of Louisiana. The two worked together during the 2017 season, and now the linebackers coach will become the Golden Eagles’ next defensive coordinator. There have also been rumors that former Southern Miss and Baltimore Ravens star Chad Williams will be joining Hall’s staff.

No matter who else will be next to Hall on the sidelines come the 2021 season, the first-time head coach highly suggests people jump on the Southern Miss train now as it’s going to be a fun ride with his more than explosive offense.

“Anybody that’s on the fence about being part of this Southern Miss program and you’re a Mississippi person, get on board with us, because we’re fixing to do this thing right and make you happy.”

To watch the full interview with Hall, check out the video below.