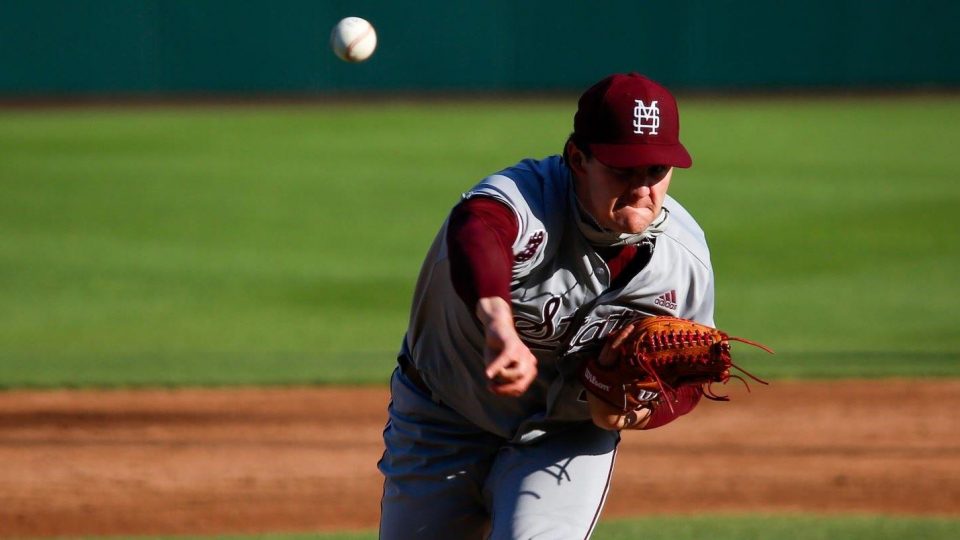 AUBURN, Ala. – The pitching staff was steady, and the offense arrived with one of its best performances of the season as the No. 4 Mississippi State baseball program grabbed the middle game of the series at Auburn on Saturday (April 10) to claim its third SEC series of the season with the finale on the horizon at Plainsman Park.

In MSU’s longest start of the season, second-year freshman Will Bednar (2-0) struck out seven batters in seven innings of work. He allowed one run on four hits and retired 12 straight batters between the third and seventh innings. He allowed multiple base runners only once in the game to earn his second victory of the season.

Four MSU relivers combined to throw the final two innings, as Stone Simmons, Cam Tullar and Chase Patrick each recorded one out in the eighth, before Parker Stinnett retired the final three batters of the game in the ninth.

In all, the MSU staff allowed two runs on seven hits, struck out 10 and didn’t walk a batter in the game. The 10 strikeouts mark the 10th straight game with double-digit punchouts and the first game without issuing a walk since May 4, 2019 at Texas A&M. In the end, the pitching staff didn’t walk a batter, hit a batter or throw a wild pitch in the game, and the defense played an errorless game and turned one double play.

Junior Tanner Allen and second-year freshman Kamren James each drove in three RBIs, with each hitting home runs in their second straight games. Allen was on base four times, including his fifth home run of the season, and scored twice to move his reached base streak to 13 games. James had two hits and homered for the second straight night.

Junior Rowdey Jordan moved his reached base streak to a career-long-tying 15 games and in the process pushed his hitting nine games with a 2-for-5 day at the plate. He doubled, singled, stole one base and crossed home plate twice. Lane Forsythe, Josh Hatcher and Luke Hancock each posted two-hit games, with Hatcher blasting MSU’s third home run of the day in the sixth inning.

Ryan Bliss led the Auburn offense with a pair of hits, including an eighth-inning RBI single, while Cam Hill hit his fourth home run of the season in the second inning to account for the other Tiger run. Jack Owen (0-2) took the loss on the mound with 3 2/3 innings of work and six runs allowed. Owen fanned two, walked one and hit one batter.

Quotable
Head coach Chris Lemonis
On Will Bednar
CL: I told the ballclub after the game that I thought it was [Will Bednar’s] best outing in our uniform. He is a power pitcher, so he usually dominates early [in the game] but, after seven innings, I don’t think he came off of his [velocity] numbers. He threw great sliders, mixed in the fastball, and started to use his changeup, which is a nice piece of development against left-handed hitters.

On the bullpen
CL: I thought they were good. Stone [Simmons] left a couple of breaking balls over the plate, but that’s the Cam Tullar we recruited. [His pitches] were nasty and I had a hard time [taking Tullar out]. [Rankin] Woley hits the lefty so well, we felt like we had to make the switch there. [Cam] was really good and Chase [Patrick] came in and did the job, too. Then, Parker [Stinnett] is getting more comfortable every time we throw him out there.

On tomorrow’s game
CL: That was the talk with the team afterwards. It’s not about sweeping, it’s about us playing the game at our highest level. We haven’t played it at our highest level yet. We are still trying to get better and push through. That is the message to our guys, that we are going to play better baseball tomorrow. [Auburn] is going to be ready to play. They are well coached, and they are an SEC program. I know they have struggled this weekend a little bit, but I expect them to come out and compete at a high level [tomorrow] and we are going to have to be ready for it.

Scoring Recap
Top First
Rowdey Jordan started the game off with a double off the left field wall and stole third base, before Kamren James drove him in with a single up the middle.
Mississippi State 1, Auburn 0

Bottom Second
Cam Hill hit a two-out home run to even things up at one.
Mississippi State 1, Auburn 1

Top Fourth
Lane Forsythe walked and advanced to third on a Jordan singled up the middle. Allen then took the second pitch he saw over the right field wall for a three-run home run.
Mississippi State 6, Auburn 1

Bottom Eighth
Bryson Ware led off the inning with a single and, two batters later, Kason Howell moved him to third a base hit. Ryan Bliss then drove in the second Auburn run of the game with a single to right field.
Mississippi State 7, Auburn 2

Up Next
No. 4 Mississippi State and Auburn wrap up the three-game series on Sunday, April 11 at 2 p.m. The game will air live on the SEC Network with Dave Neal and Chris Burke on the call.

No. 3 Ole Miss Baseball Splits Doubleheader with No. 1 Arkansas