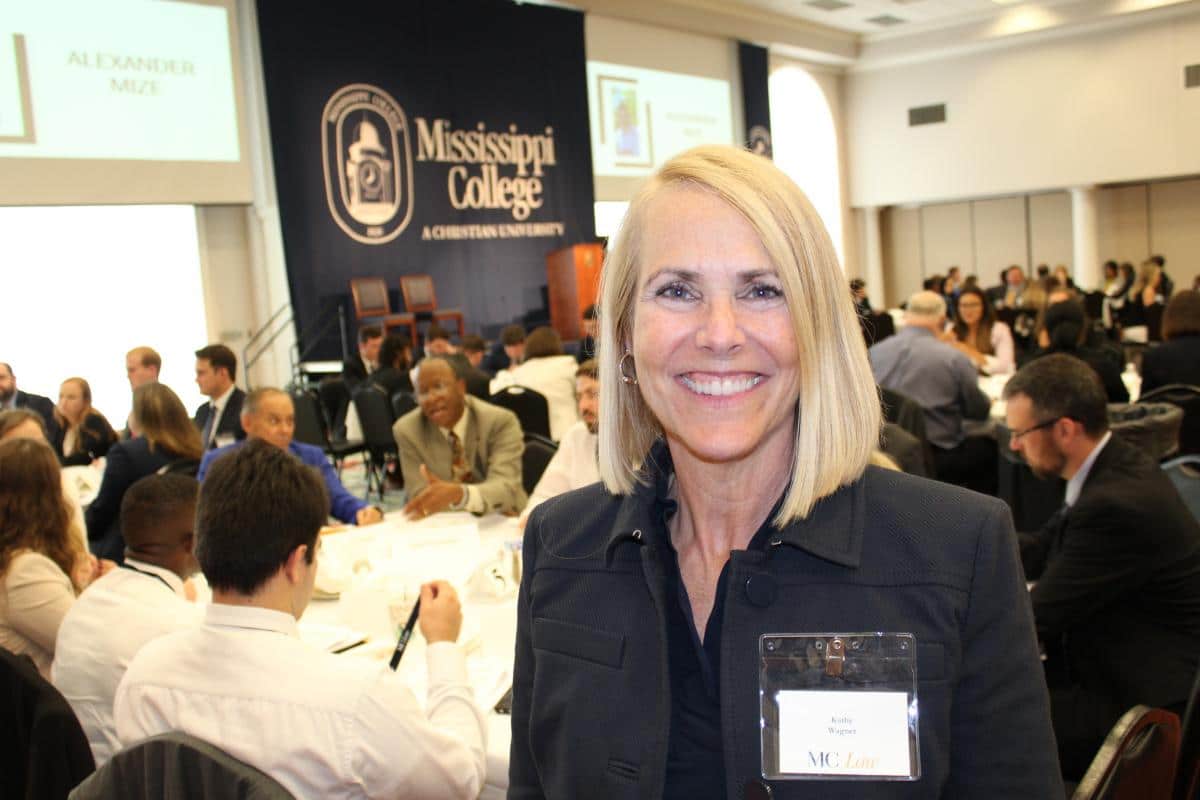 Mississippi College law student Kathy Wagner believes she’s entered the third phase of her life.  At age 60, the Gulf Coast mom with six children is delighted to be a first-year MC Law student.  “I finally have the time and freedom to pursue a lifetime dream,” says the Gulfport resident.

But the task isn’t easy. She often spends six hours of studying after classes. “It’s going phenomenal. It is the hardest thing I’ve done in a long time,” Wagner said. Helping guide her, she said, are extraordinary professors and her faith. “If He put me here, He will see me through.”

At orientation in August with judges and lawyers sharing their wisdom with 126 first-year students, Wagner took extensive notes. She fit right in with younger students in the Class of 2022. Wagner is among 15 first-year students above the age of 30, says admissions director Jay Armstrong.

A 1981 mechanical engineering graduate of Tulane University, Wagner immediately worked in the field as a reservoir engineer in Exxon’s Office division. She served with other major oil companies for several years. She stayed involved with buying and selling real estate for personal investments as well.

Her life’s journey shifted to phase two as Wagner gave birth to six children in six years. Kathy also plunged into community service roles as a Vacation Bible School teacher and youth group leader at St. James Catholic Church. Wagner helped volunteer with her kids’ school sports activities on the Gulf Coast. Like many neighbors, her dream home was demolished by Hurricane Katrina in 2005.

Fast-forward 14 years. Three of her children will graduate from Mississippi State University in May 2020. James, 23, will earn a degree in mechanical engineering, Tipton, 23, and Hannah, 21, will each get degrees in finance. Ramsey, 21, will receive his chemical engineering degree at the U.S. Military Academy in West Point, N.Y. in May.

“I’m absolutely so grateful for this opportunity,” Wagner said when asked to be featured in a story on first-year MC Law students. “Thank you for celebrating with me in God’s goodness.”

Her two oldest children are faring well, too. Her oldest daughter, Shelby, began her residency in emergency medicine at Norman Regional hospital in Oklahoma. Weston, 25, is training to become a tugboat captain in Mobile, Alabama.

A divorced single mom, Wagner experienced challenges at times, but keeps rising to the occasion, uplifted by her deep faith.

“Raising the children as a single parent has given me the insight to the needs of children of divorce,” she said. “Knowing it is possible for all to be well after such hardship has instilled hope.”

With an MC Law degree in hand, she wants to serve as an advocate for people in need. “I’m open to whatever the Lord wants me to do,” says the New Orleans native.

They often come back to earn a law degree after successful careers, Bennett said. “It’s never too late to go to law school.”

Non-traditional law students, Bennett said, “give us diversity in the classroom. They consider the law from different perspectives. They bring experience that is so important.”

Look for the Gulfport mom to lean on her faith, and toughness to finish law school. “Tenacity, intensity and a love of learning are traits that I have always possessed.”

Women like Wagner and Ngan comprise 48 percent of the MC Law Class of 2022. The new crop of law students on the Jackson campus comes from 17 states. They include six members of the military.

Drinking plenty of coffee to stay focused on her studies, the Mississippian seldom slows down all week. “This is where I want to be.”