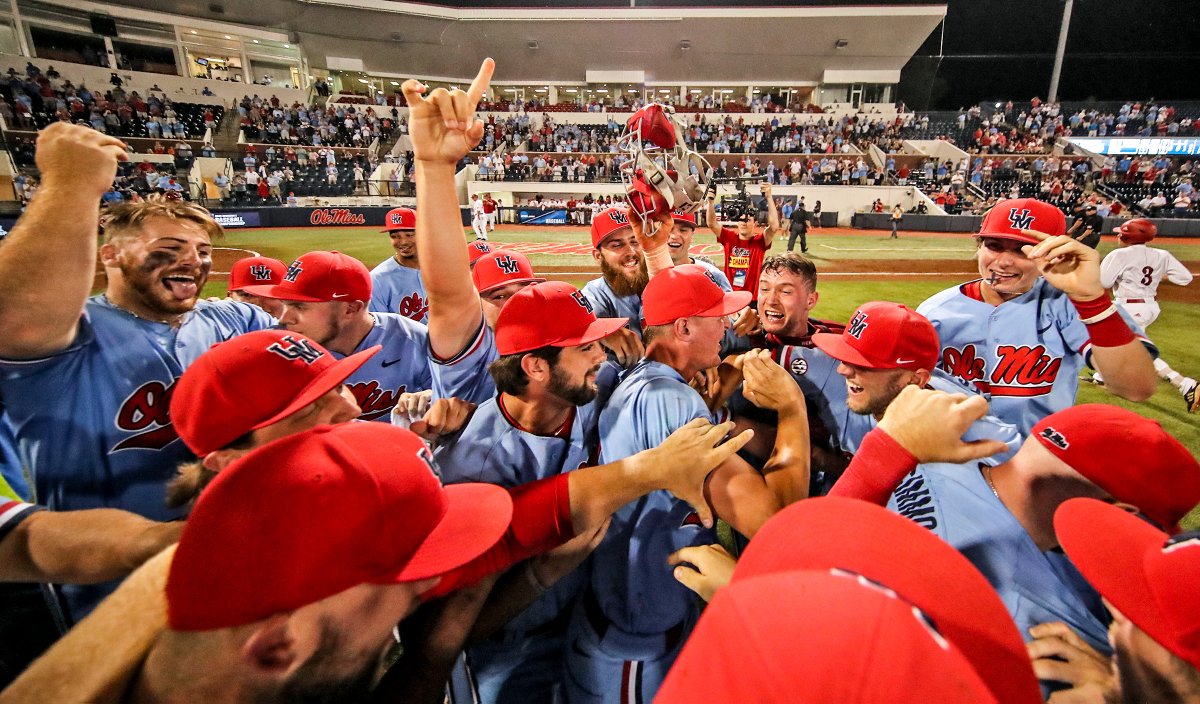 His hair and uniform soaked in a concoction of perspiration and water from the celebration that had ensued, Thomas Dillard paused as he sat in front of a microphone and remembered the sting he felt a year ago, sitting in the same room trying to come to terms with abrupt fashion in which his season had ended.
“I remember sitting here last year after we lost to Tennessee Tech, in this same spot,” Dillard said. “It was not really a good feeling. It was a dark feeling.. It is a great feeling now knowing we have another weekend of baseball left.”

Dillard didn’t want to experience that pain again and certainly did his part in Ole Miss’ 19-4 win over Jacksonville State to advance to the program’s first super regional since 2014. He wasted no time in ensuring the result would be different this time around. Dillard hammered the first pitch of the game over the right-center wall. The feeble fastball struck by the leadoff hitter foreshadowed for the onslaught to come. He launched a towering grand slam in the fourth that pushed the game into a full-on rout.

Dillard hit two home runs in SEC play this season and homered three times this weekend alone. His 9 RBIs on the weekend program were a program record for a regional.

As valued as Dillard’s services were, the work from his colleagues was more than enough to extend the team’s season another week. Ole Miss rolled through the 2019 Oxford Regional, belting nine home runs and outscoring its opponents 41-7. It didn’t make an error and its pitching staff dazzled. Three weeks ago, this team was sputtering and appeared to be on the brink of collapse as it floundered in a six-game losing streak it snapped on the final day of the regular season.

A six-day run at the SEC Tournament breathed life into the Rebels when it seemed as if they were without a pulse. The surge in Hoover changed the trajectory of the team’s season. It brought June baseball to Oxford — something that seemed like a pipe dream when Ole Miss arrived at Hoover Metropolitan Stadium — and allowed it to rectify last year’s collapse at the very scene at which occurred.

“We were in a dark place,” head coach Mike Bianco said. “It was tough. These guys went to Hoover and found themselves. They played great baseball there and came out on the other side. It gave us a lot of momentum for this weekend.”

Bianco spoke of the low place his group was in heading to Knoxville for the final week of the regular season, on the heels of being swept at home by Mississippi State in what was one of the worst regular season weekends of the Bianco’s tenure. The head coach is no stranger to the highs and lows of a 56-game season. Just 364 days after what Bianco called the lowest moment of his baseball career, he was celebrating with a different team comprised of many of the same faces that endured the anguish last year’s somber ending brought. On this night, Bianco beamed a grin of both joy and presumably some relief. He’s had teams in the past that get tight in the brightest spotlight and become increasingly more tense when adversity strikes. This team has been different. Bianco has been different. He’s been relaxed and, at times, self-deprecating. In a video released by Ole Miss Sports Productions, Bianco was shown talking to his team on the eve of the completion of this redemption tour.

“I don’t know what will happen tomorrow, but we will be ready to play,” Bianco exclaimed. “Let’s finish it. Hey, it will be fun. It is going to be fun. Let’s finish.”

The dugout has been loose and the team’s play has reflected it. It crawled out of the low place it sunk into at the end of the regular season.

“It seems like I pressed the wrong button for a long time,” Bianco said. “When we won that final game at Tennessee and then we pitched well in Hoover and got key hits. Somewhere along the line in Hoover, you could tell there was a little different feeling in the dugout. That is what makes this game so difficult, but yet so great. Gosh, you can feel so bad and then all of a sudden feel so great.

“I have seen it go the other way. You don’t get out of that dark place. The season ends and you wonder what the heck happened.”

Rather than fretting about the impending outcome or fading towards a disappointing finish, this Ole Miss team remained in and appreciated each moment, like playing at Swayze Field again when a month ago that appeared to be yet another squandered opportunity. Ole Miss has won eight of 10 and is playing its best baseball of the season. It is likely no coincidence that has come as it adopted its newfound relaxed mindset.

This regional was devoid of drama. Ole Miss was never in a high-leverage situation and was never close to letting its fate slip away from its grasp. Scoring 41 runs in 26 innings go a long way in helping avoid that. It was a slow, steady path to vindication. The Rebels will now play a three-game series at Arkansas, a team it is 3-2 against this year. Only one SEC team has won a series at Baum Stadium since April of 2017. That team is Ole Miss and it has done it in each of its last two trips.

After celebrating on the mound, the team ventured to the outfield where it was serenaded with beverage showers and screaming fans as Sunday turned to early Monday. This team’s message has been consistent all year: Last year is in the rearview and has not occupied any of its focus during the 2019 campaign. But in fleeting moments along the way, a few players have admitted it drives them slightly, whether it has resided in the subconscious thoughts or crept up in random blips. Bianco admitted he may not have ever had a team so eager to go celebrate with one another and with the fans. In a season that’s tried his patience and resolve, he sat back and reveled in the joy of Johnson and Dillard describing the postgame scene. The two juniors have played integral roles on both the 2018 and 2019 teams. They’ve experienced rock bottom and Bianco took pleasure in seeing them describe the climb back toward the high.

“I just feel good. We are all proud. Proud of one another. I am happy,” Bianco said. “The guys on last year’s team and even the new guys deserve this. But the guys on last year’s team deserve today. To finish their last games at Swayze Field like this, they couldn’t wait to go out there and touch the fans. That is always a cool tribute to the fans. I don’t know if I have had a team that wanted to go out there like these guys did.”