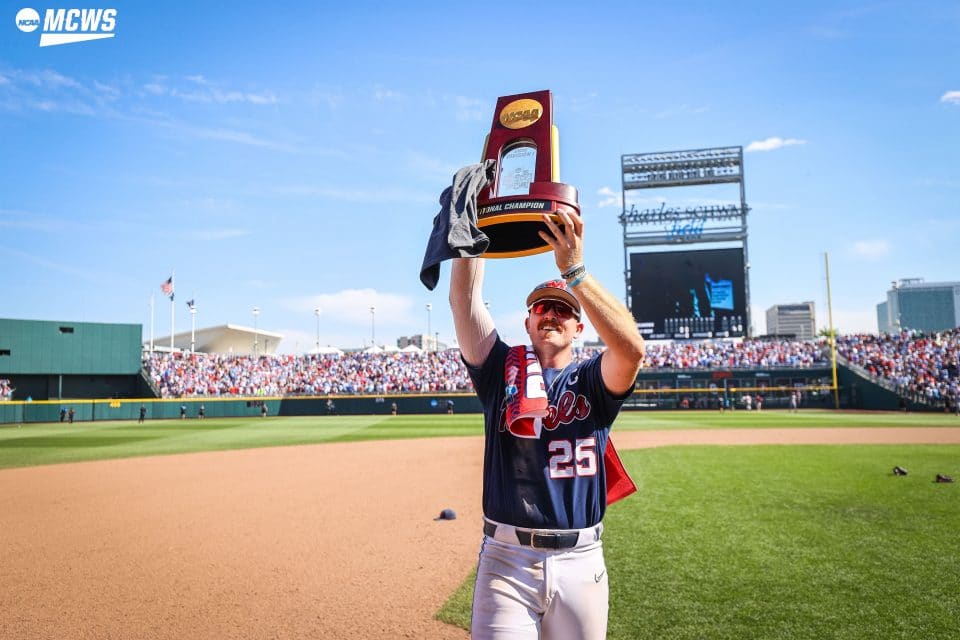 The Rebels finally broke the scoring hiatus in the bottom of the sixth inning courtesy of a solo home run launched by sophomore SS Jacob Gonzalez who had been in a bit of a slump throughout the CWS.

Oklahoma quickly responded in the top of the seventh inning after a Jackson Nicklaus RBI scored a run. The Sooners loaded the bases and a walk thrown by freshman RHP Mason Nichols gave Oklahoma a 2-1 lead. Nichols was immediately pulled from the game and senior LHP John Gaddis got the Rebels out of a troublesome jam.

Fortunately for Ole Miss, while the offense seemed inept through seven innings of play, the bats woke up in the eighth inning. Sophomore CF TJ McCants scored on an RBI single hit by Gonzalez and tied the game. In addition, a couple of wild pitches thrown scored both senior 3B Justin Bench and Gonzalez, giving Ole Miss a 4-2 lead going into the top of the ninth inning.

Coach Mike Bianco turned to his closer, Brandon Johnson, to seal the deal for the Rebels. Johnson did just that. The senior RHP proceeded to strike out all three batters he faced and won the team their first national title in program history.

“We never quit. We never gave up. We battled together.” said junior RHP Dylan DeLucia.

DeLucia was named the MVP of the 2022 Men’s College World Series.

The state of Mississippi has now claimed ownership of consecutive national championships.

Thunder & Lightning: When Will Mississippi State’s Baseball Recruiting Pick Up?