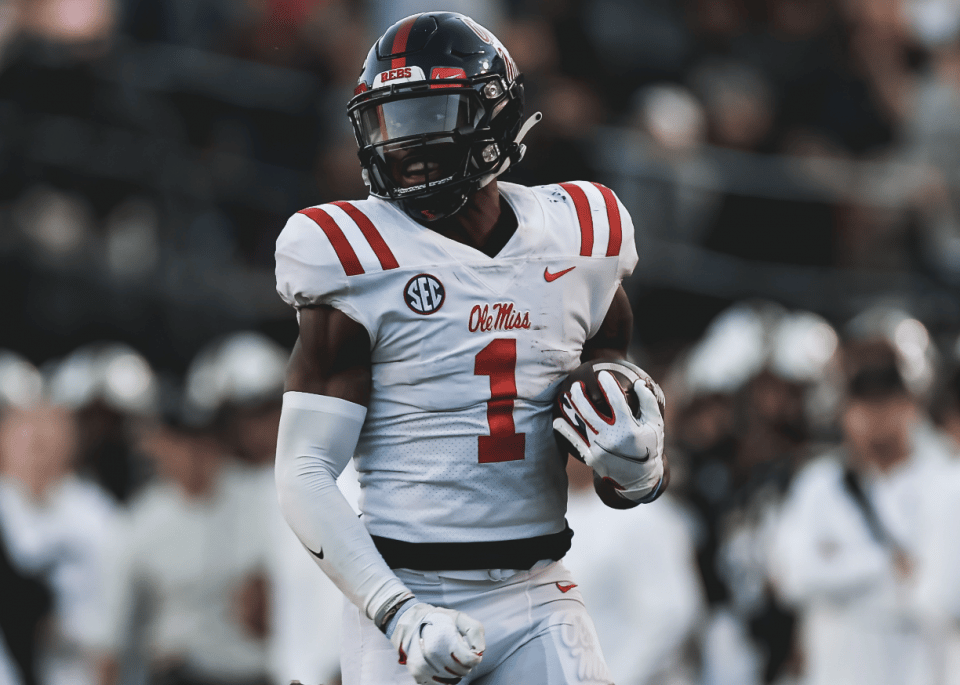 Jonathan Mingo etched himself in the Ole Miss history books on Saturday as the No. 9 Rebels defeated Vanderbilt by a score of 52-28.

Mingo, who hauled in nine catches for 247 yards and two touchdowns, broke the school’s single-game receiving record set by Elijah Moore in 2020. Mingo joins Moore and A.J. Brown as the only Rebels to exceed 230 yards with two touchdowns in a game.

Afterward, Mingo told reporters that when he made it back to the locker room, he actually had a text waiting for him from none other than Moore.

“It’s kind of a blessing to break his record,” Mingo said. “Elijah’s somebody I really looked up to. He’s like a big brother to me.”

Mingo wasn’t the only Rebel who had a career day against the Commodores. Jaxson Dart finished 25 of 32 passing with a career-high 448 yards along with a season-high three touchdowns. The performance ties Dart with Jordan Ta’amu for the fifth-most passing yards in a single game in school history.

Along with Mingo, Dart’s stat line can be credited in large part to Jordan Watkins. The Louisville transfer had his best game since arriving in Oxford, bringing in a career-high 117 receiving yards on seven catches, including a 61-yard touchdown in the opening half.

“They did what they were supposed to do in the beginning,” Kiffin said.

Next up for the Rebels will be an 11 a.m. matinee against the Auburn Tigers on October 15.