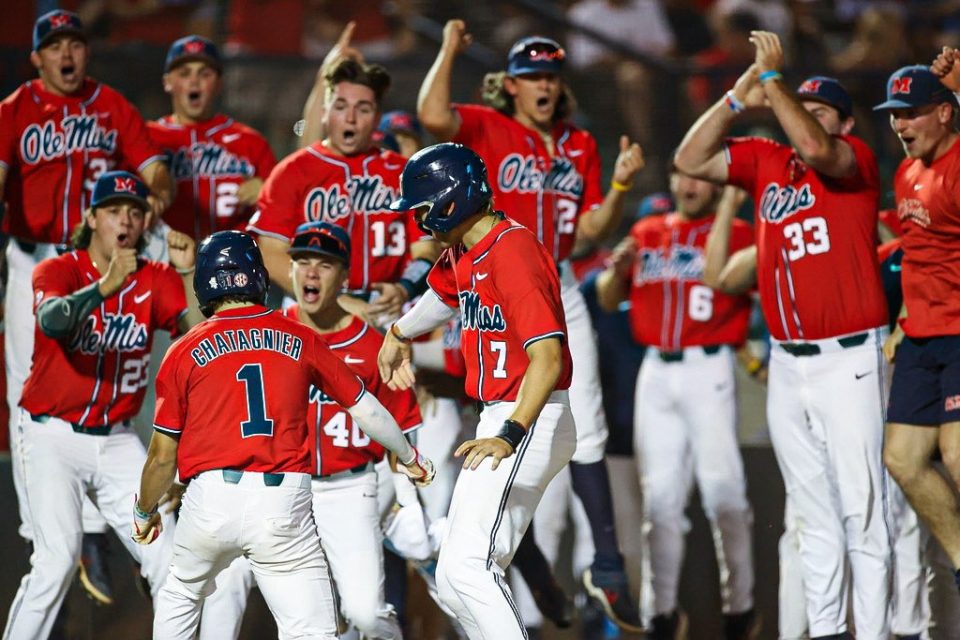 Rebels One Win From Omaha After 12-3 Victory Over Wildcats

TUCSON, Ariz. – No. 12 seed Ole Miss baseball is one win away from Omaha after an emphatic 12-3 win over No. 5 seed Arizona Saturday night at Hi Corbett Field.

The heat is on and @OleMissBSB has taken over Tucson!

Six different Rebels posted multi-hit games in the dominant victory. Jacob Gonzalez went 3-for-4 with three runs scored and a home run. Peyton Chatagnier also homered as part of a 2-for-5 day, while Kevin Graham (3-for-5), Hayden Dunhurst (3-for-4), Tim Elko (2-for-4) and John Rhys Plumlee (2-for-5) all notched multiple hits in a tremendous collective offensive effort.

OFF THE WALL AND GONE! 🗣#RebsBSB all over Arizona early!

Doug Nikhazy turned in another terrific start against college baseball’s most prolific offense, going 5.1 innings with two runs allowed on six hits, striking out 10 along the way. He earned his 12th win of the year, the most ever in a single season by a Rebel pitcher. Austin Miller did the rest, turning in one of his best outings of the season, going 3.2 innings with one run allowed on four hits to earn his first save of the season.

Ole Miss jumped on the board in the first inning for the fifth consecutive game courtesy of a leadoff home run by Jacob Gonzalez, the 11th of the season for the Freshman All-American.

The Rebels exploded for six runs in the second inning to chase Arizona starter Garrett Irvin early. The scoring started with RBI singles by Hayden Dunhurst and John Rhys Plumlee. Gonzalez then delivered again with a two-RBI double, setting the stage for a two-run home run by Peyton Chatagnier, giving the Rebels a commanding 7-0 lead.

Chatagnier had a shot to break the game open further in the third, stepping to the plate with the bases loaded and two outs, but he grounded out after battling to a full count to end the scoring chance.

Arizona got two runs back in the fourth via a RBI singles by Tony Bullard and Ryan Holgate, but Nikhazy struck out back-to-back Wildcats to escape the jam.

It was no matter as the Rebels answered right back with three runs of their own. Kevin Graham and Tim Elko opened the inning with back-to-back base hits. Graham touched home on a wild pitch, and Elko scored on a Cael Baker sacrifice fly. Dunhurst then drove TJ McCants home on a base hit to center to make it a 10-2 ballgame.

It looked as though the back-and-forth would continue in the fifth when the dangerous top of the Arizona order placed two in scoring position with just one out, but Nikhazy worked a strikeout and a flyout to escape the inning unscathed.

While Nikhazy kept the Cats quiet, Ole Miss kept making noise. A Gonzalez double and a Chatagnier single started it. The pair came home on a Graham single and an Elko sacrifice fly, respectively, to expand the lead to 10.

Arizona was once again poised to cut into the lead in the sixth as two Wildcats reached on walks to end Nikhazy’s night with one out in the frame. Austin Miller stepped in and promptly teamed up with Dunhurst on a strike-’em-out, throw-’em-out double play to end the inning.

The Cats scratched one run across on a long home run by Williams in the seventh, but it was too little, too late.

Quick Hits
– Ole Miss improved to 45-21 on the season, the fourth-most wins in program history.
– Ole Miss tied the all-time series against Arizona, which now stands at 2-2.
– Ole Miss improved to 62-52 all-time in the NCAA Tournament.
– Kevin Graham extended his reached-base streak to 59 games, the longest in the country this season. He has reached safely in 64 of 66 games this season.
– Doug Nikhazy struck out 10, his eighth outing with double-digit strikeouts this season, to pass Will Kline (134 in 2007) and Drew Pomeranz (139 in 2010) to second on the Rebels’ single-season strikeout chart, now with 142 on the year. He is just four off the program record of 146, set by Lance Lynn in 2007.
– Nikhazy earned his 12th win of the season to set a new single-season program record.
– Ole Miss scored double-digit runs for the 18th time this season and logged its 28th game with eight or more runs scored.
– The Rebels notched their 35th game this season with double-digit hits.
– Ole Miss’ 16 hits are its most ever in a Super Regional game.

Retire your flag, honor a vet