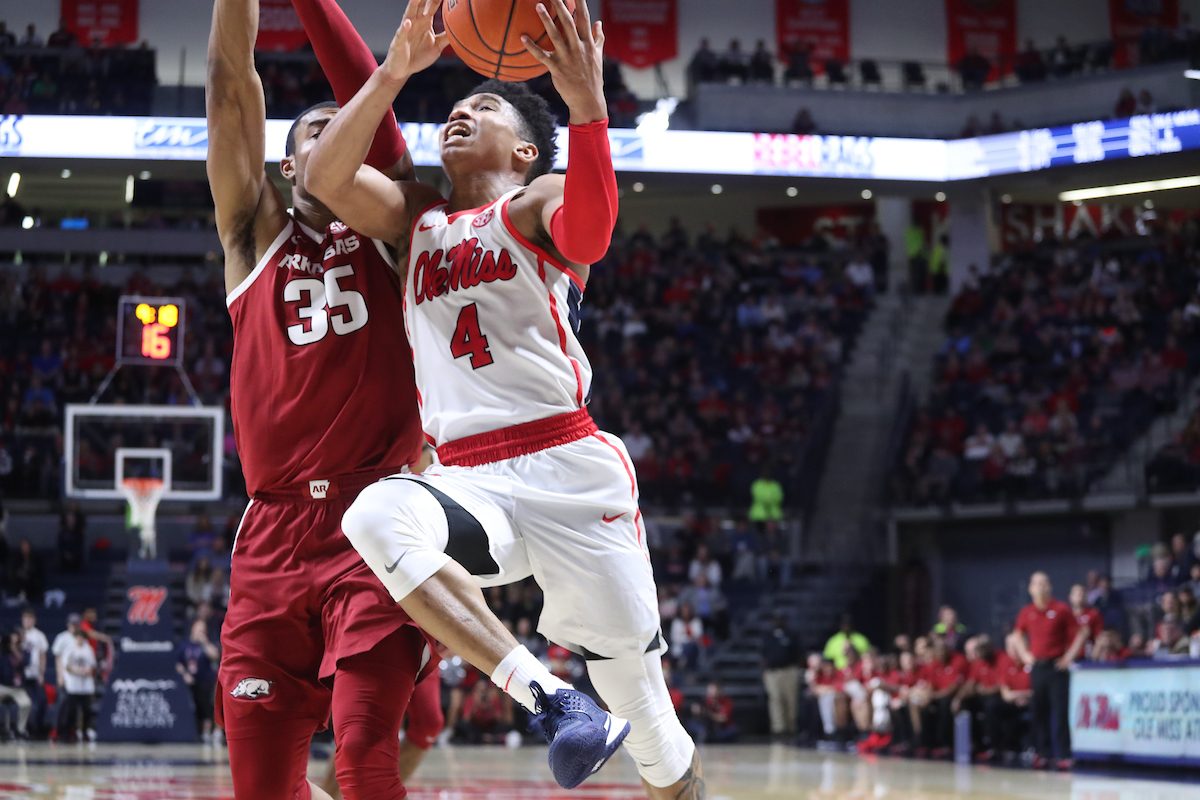 The final five minutes underscored the underlying issues with the team.

Ole Miss coughed up an 11-point second half lead in a 76-72 home defeat to Arkansas on Saturday night to fall to 9-6 (0-2). The Rebels scored four points in the final five minutes of the game, one of which was a Breein Tyree layup in the final seconds as the game slipped out of reach.

Arkansas guard Isaiah Joe scored 26 of his 34 points in the second half to twist the knife in a stinging defeat for this reeling Ole Miss club.

For a team that has struggled mightily making shots and running coherent half-court offense, the first 30 minutes of the game went pretty well. Breein Tyree was hitting jump shots and getting help elsewhere. The senior scored 27 points. Struggling sophomores Blake Hinson and K.J. Buffen scored 13 and 12 points respectively, and Devontae Shuler added 10 of his own.

But when push came to shove, and Arkansas cranked up the perimeter pressure in the game’s final minutes, Ole Miss got flustered. An eight-point lead at 64-56 with 6:03 remaining evaporated in 30 seconds. Joe hit back-to-back three pointers, the second of which coincided with a Khadim Sy shove of Adrio Bailey under the rim. Bailey sank two free throws to cap a five-point possession and tie the game. It didn’t get any better for the Rebels after that.

Arkansas head coach Eric Musselman deployed soft half-court trap in an effort to get the ball out of Shuler and Tyree’s hands down the stretched. It worked quite well.  It wore down the two guards — both of whom are playing a taxing amount of minutes because of injuries that have left Ole Miss with four healthy guards on the roster — as the Rebels looked disjointed on that end of the floor.

“They kept it out of Breein’s hands and just no one else could make a play,” Kermit Davis said. “We did a poor job at the end of getting to Joe.”

This is a reoccurring issue for the Rebels, who have now lost three consecutive games. A road loss at Texas A&M earlier this week followed a similar script as the final five minutes of this one. Tyree kept the team afloat with 34 points, but the Aggies held him to two field goals in the second half and no one else could make shots down the stretch.

Ole Miss played pretty well for the majority of this game. It held a 33-27 halftime lead after following in an early 10-2 hole. The Rebels were 10-of-26 from the field in the half and closed on a 7-0 run. But eventually Ole Miss wore down. Injuries to Luis Rodriguez — who Davis said likely won’t return this season — and Bryce Williams (minor groin injury) have depleted the team’s depth and limited Davis with an already thin and inexperienced bench. With the shortage of guards, Ole Miss tried to play Hinson, Buffen and Sy together but it did not work. Hinson and Buffen make too many mistakes defensively when on the floor together and Sy had a rough time scoring around the rim. Franco Miller played 24 unproductive minutes as a result. Austin Crowley’s minutes have increased as well.

“We tried to play our three bigs and just couldn’t do it,” Davis said.” Then we played three guards and they just drove it right by us.”

Shuler and Tyree played 36 and 39 minutes in this game, rarely leaving the floor. Shuler is playing through a heel injury and Tyree is shouldering a heavy scoring burden. It’s a tough ask, even for a pair of All-SEC-caliber guards. But this team doesn’t really have any other options.

“It’s been really tough but I have to play through it,” Shuler said. “We have to take responsibility for all of these minutes we are playing and grind through it.”

Tyree scored 15 down the stretch but the team crumbled around him. Buffen had a late crucial turnover. The perimeter pressure forced them to run offense to start higher up the floor and bothered the Rebels greatly. The ball stops moving when Shuler doesn’t possess it. Ole Miss had just six assists on 22 made baskets. That is a suboptimal statistic. Tyree is the sole focus for opposing defenses as no one else is a consistent threat to score.

The other recurring issue with this team is letting other team’s best players beat them. Butler’s Kamar Baldwin scored in December in a game Ole Miss lost. Wichita State’s Eric Stevenson went for 29 last weekend and Joe torched the Rebels in this game.

“We just kind of relaxed and didn’t get to him,” Davis said. “He’s got great length and can make shots.”

Joe is one of the better guards in the SEC, but Ole Miss didn’t do itself any favors with how it defended him. He was 7-13 from three-point range and was 11-18 from the field.  He had over half of the team’s points in the second half and six of the eight in the 30-second spurt that changed the course of the game.

“He got a couple of great looks when we played out 13 (half court trap) and got a couple of corner pocket threes,” Shuler said. “That came from us not being aware and hit one when we switched to man-to-man.”

A quadrant-one win slipped away from this team in the final minutes. Ole Miss is now 0-2 in SEC play and the road gets no easier. A road trip to Florida awaits on Tuesday followed by a home game against LSU. This team is a short-handed and doesn’t seem to have solutions for the problems that plaque it. The season is still young, but Ole Miss is in a fragile place, playing an ugly brand of basketball.

“There are no moral victories,” Davis said. “Did we improve and play well in spots? Yes, but we expected to win this game as we prepared. That was a quadrant-one win that got by us, but we have two more coming next week.”