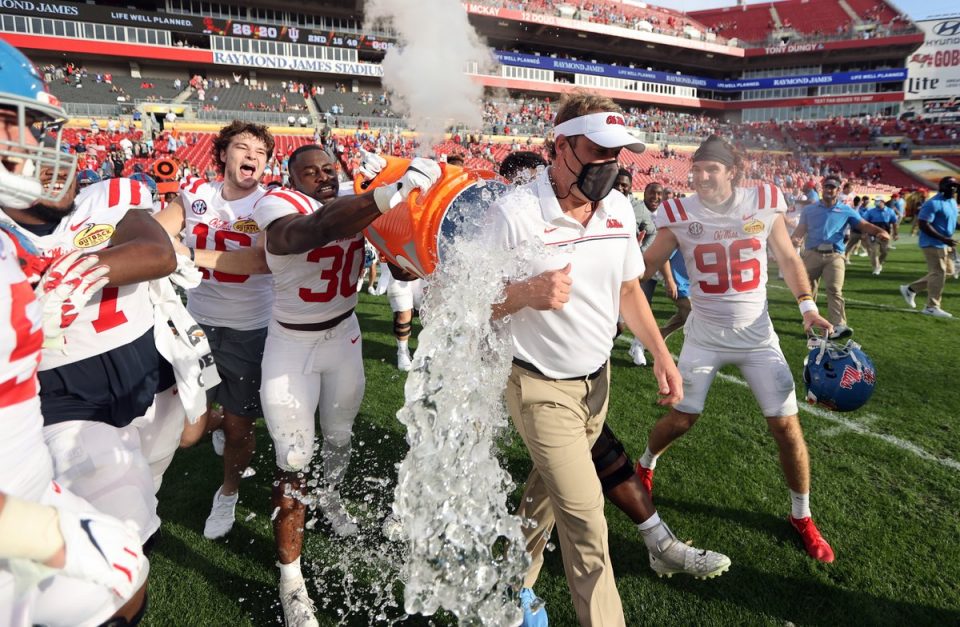 A missed Luke Logan extra point set No. 7 (or No. 11 depending on where you look) Indiana up with a chance to drive down and win the Outback Bowl as they trailed Ole Miss 26-20, but serving as the unlikely hero, the much-maligned Rebel defense made a stand to complete perhaps its best performance of the season.

Sealing the program’s first bowl victory since the 2015-16 season, the Rebel rush got to Hoosier quarterback Jack Tuttle, making his second start for an injured Michael Penix Jr., and forced an incompletion on 4th and 18 after Indiana had matched into Rebel territory.

The Rebels retook the lead on their previous drive with just over four minutes to play as QB Matt Corral found Ontario Drummond for a 3-yard touchdown set up by a 44-yard connection from Corral to backup QB-turned slot receiver John Rhys Plumlee.

Things got tight in the 4th quarter despite the shorthanded Rebels entering the final 15 minutes with a 20-6 lead, but the Rebels ultimately prevailed to finish Lane Kiffin’s first season at the helm at 5-5.

“Really an awesome day for us, coming down here, being out of a lot of players,” Kiffin said. “Glad to come away with this against the No. 7 team. Credit to our players. There were teams around the country stepping up with players out. I told our players ‘Why can’t we be one of those teams?’ Really cool for our seniors to go out like this.”

Not only did Kiffin get a bowl win in his first season, he also got a contract extension which was announced by Ole Miss Athletics prior to kickoff.

Working without several of his top weapons in Elijah Moore & Jerrion Ealy, Corral bounced back from his dismal performance in Baton Rouge finishing with a stat line of 30/44 for 342 yards 2 touchdowns, and most importantly, no interceptions. In the process, the sophomore tied Eli Manning for third in school history with 29 touchdown passes single season.

The running game missed Ealy, out with injury, but freshman Henry Parrish Jr. and Snoop Conner shouldered the load in his absence. Parrish led the team with 63 yards on 17 carries but Conner had the run of the day. The sophomore from Hattiesburg broke loose up the middle for 33 yards setting up a 4-yard touchdown run to give the Rebels that 20-6 lead.

The Rebel defensive unit entered today’s game with a reputation as one of the nation’s worst, but the group forced two turnovers—an Otis Reese interception and a fumble forced by Tylan Knight— held the Hoosiers to 369 yards while racking up six tackles for loss and two sacks.

An Outback Bowl victory caps an exciting year for the Rebels as they look toward a future under Kiffin that they hope continues to see postseason berths and subsequent success.

Ole Miss gets the trophy, but more importantly, you get a free ‘bloomin’ onion’ as the SEC triumphs over the Big 10 in Tampa.

We’re celebrating the Ole Miss win at the @outbackbowl with a FREE Bloomin’ Onion per table/order with an entree purchase. pic.twitter.com/EmyLwcrOJq