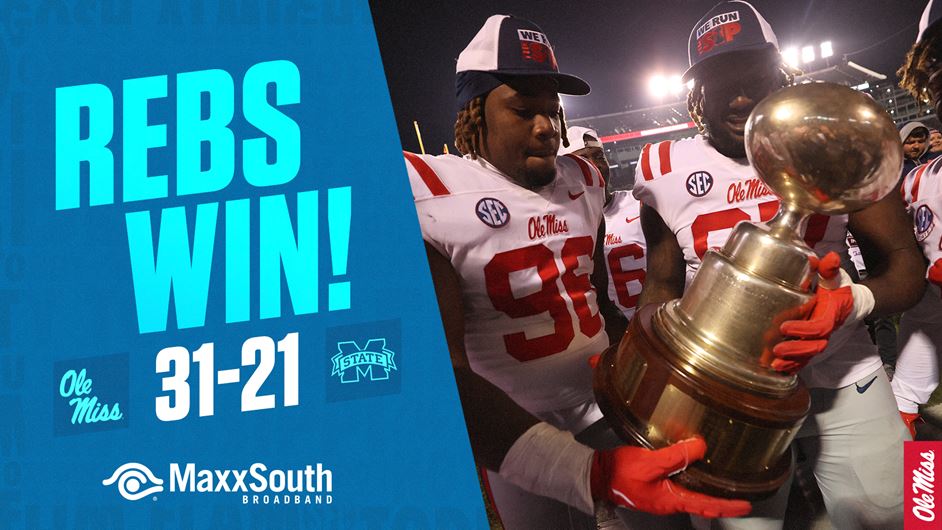 STARKVILLE, Miss. – The Golden Egg trophy returns to where it came from on Thanksgiving Day. The No. 9-ranked Ole Miss football team kept Mississippi State out of the end zone for over 52 minutes of play in a 31-21 Egg Bowl victory over the Bulldogs inside a wet Davis Wade Stadium on Thursday. The win gives Ole Miss their first 10-win regular season in program history.

Matt Corral completed 25 of 33 passes for 229 yards and accounted for two scores. Jerrion Ealy accounted for 103 yards of offense and had a touchdown reception, 60 of those yards came on the ground to lead the team. Snoop Conner added 54 yards of his own and scored two touchdowns while Dontario Drummond had a team-leading 133 receiving yards on 13 catches.

Defensively, Chance Campbell had 12 tackles to lead the way while Jake Springer had 10 tackles. Sam Williams had a dominant pass rushing night with his two sacks while the defensive unit forced Mississippi State to finish 4-for-14 on third down and made critical stops when it mattered most.

Mississippi State struck first with a 34-yard field goal from Nolan McCord to make it a 3-0 game with 11:46 left in the opening quarter. The Rebels responded a field goal of their own. After their uptempo drive stalled in the red zone, Cale Nation connected on a 25-yard field goal, the first of his career, to tie the game at three with 7:07 left in the first quarter.

Mississippi State proceeded to convert twice on third down en route to the Ole Miss seven-yard line but had to settle for another field goal by McCord. His successful 29-yard attempt gave the Bulldogs a 6-3 lead going into the second quarter. The Bulldogs again used their passing game to move down field, but Ole Miss came away with its first stop of the game as McCord’s third field goal attempt from 40 yards out missed to the right. Ole Miss seized on the opportunity with the drive that finally reached the end zone. Conner scored a goal-line touchdown to give the Rebels their first lead of the game, 10-6 with 2:21 remaining in the first half.

Bulldog quarterback Will Rogers used a 32-yard reception by Lideatrick Griffin to again get inside the Ole Miss red zone, however, the Rebels held their ground once again. Consecutive drops near the red zone forced McCord to kick yet another field goal and again he couldn’t connect. His 33-yard miss gave Ole Miss a 10-6 lead at halftime despite being outgained 208-178 in total yards.

The Rebels forced a punt coming out of the locker room and picked up right where they left off offensively. A 34-yard reception by Drummond highlighted a seven-play, 82-yard drive that ended with another goal line touchdown by Conner. With 10:24 left in the third quarter, the Rebels had a 17-6 lead.

The Rebel defense then made perhaps its biggets play of the night—a drive-ending sack by Sam Williams on 4th-and-7 to give Ole Miss the ball back with 2:16 remaining in the third quarter. The Rebels reached the Bulldog 31-yard line going into the final quarter of play.

A 4th-and-4 gamble on the Mississippi State 30-yard line later paid off as Corral scored a five-yard touchdown on the ground to give Ole Miss a 24-6 lead with 11:17 remaining. The Rebel defense came through once again when Campbell deflected a 4th down pass at midfield to give the Rebels the ball with a commanding 18-point lead.

On the ensuing third down play, Corral was picked off by Mississippi State’s Jett Johnson and the ball was returned to the Ole Miss 22. Two plays later, Rogers connected with Jaden Walley to score their first touchdown of the night. Following the PAT, the Rebel lead was cut down to 24-13 with 7:20 remaining.

However the Ole Miss offense didn’t relent as Ealy scored on a 15-yard touchdown reception to get the lead back up to 18. Ole Miss held a 31-13 lead with 5:35 left to play. In desperation mode, Mississippi State’s Jo’quavious Marks scored a late touchdown and a two-point conversion followed. However, it was too late as the Rebels retained possession of the Golden Egg.

The Rebels now await a postseason game and destination. Kickoff date and time will be determined at a later date.