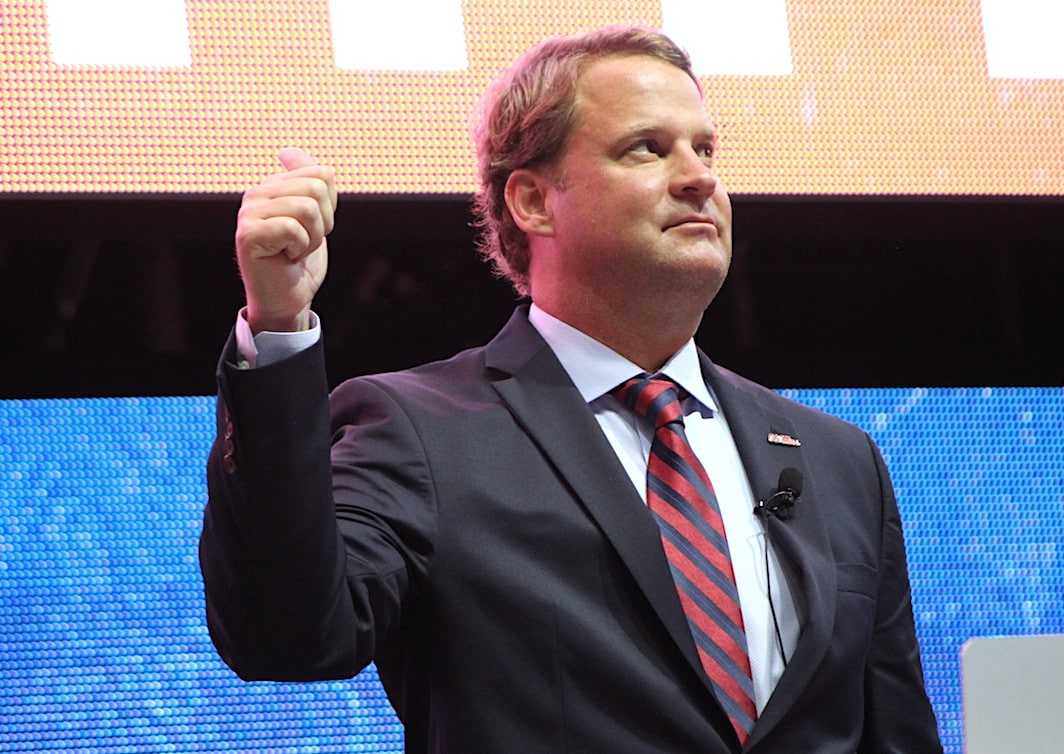 It may have taken an extra week, but Lane Kiffin has officially secured his first win as the head coach at Ole Miss.

In Saturday’s 42-41 overtime win over the University of Kentucky, the Rebels wasted no time getting on the scoreboard with an eight-play, 75-yard drive that ended in a one-yard touchdown run by Jerrion Ealy.

Kentucky, who boasts one of the top offensive lines in the Southeastern Conference, replied with a big 72-yard run from Asim Rose which looked like a touchdown until the senior running back decided to slow down and throw up a peace sign, giving Rebel defenders just enough time to bring him down short of the end zone.

Two plays later, sophomore linebacker Ashanti Cistrunk stripped Kentucky quarterback Terry Wilson of the ball in what could be considered the Rebel defense’s best play of the day.

The Ole Miss offense couldn’t capitalize on the turnover as Kentucky forced an easy three-and-out, ultimately leading to the Wildcats evening the score at seven with 7:36 left in the first quarter.

Another three-and-out later, and Kentucky was able to find the end zone yet again, taking their first lead of the day. This time, the touchdown came out of the wildcat formation from a redemption-seeking Rose.

The second quarter started off with a quick touchdown, hauled in by a wide-open Kenny Yeboah, for the Rebels, however, the Wildcats were able to squeak into the end zone just seconds before the half, going into the locker room with a 21-14 lead and 220 total yards on the ground.

Following the halftime period, the Wildcats continued to rush the ball with success as Chris Rodriguez broke off for a 22-yard touchdown run to give his team the first two-possession lead of the game.

This is where Jonathan Mingo decided to get into the mix.

The sophomore receiver out of Brandon High School scored the next two Rebel touchdowns, tying the game up once again—this time with 13:37 remaining in the contest.

The Ole Miss defense stood strong and got the ball back in the hands of their streamlining offense, and three plays later, Snoop Conner forced the ball into the end zone for his second touchdown of the day.

Kentucky got the ball back with 8:37 left to play, and thanks to a methodical 12-play drive capped off by anther Rodriguez touchdown, they were able to send the game into overtime.

Starting the extra period out on offense, the Wildcats scored quickly on a 10-yard draw play with Wilson, but fortunately for the Rebels, placekicker Matt Ruffolo missed the ensuing extra point.

It only took four plays for Matt Corral to connect with Elijah Moore in the end zone, leaving it all up to Luke Logan, who has experienced a series of unfortunate misses over the last two games, to win the game.

Ole Miss fans around the country were able to take a sigh of relief after Logan booted the extra point directly through the uprights, securing Kiffin’s first win as the Rebels’ leader.

In his postgame press conference, Kiffin raved about his team and their ability to come back and get a win over a good Wildcat program.

“[It was] obviously an awesome win for our fans, for our kids,” Kiffin said. “Crazy game, to be down like that and for them to come back and go to overtime—just a crazy game. It was great to see our guys battle back.”

Defensively, Ole Miss has a lot to work on—especially inside. Saying Kentucky’s offensive line controlled the line of scrimmage all day long may be an understatement as the Wildcats (0-2) had three players rush for over 100 yards for the first time since 1996.

Next up for the Rebels (1-1) will be a home matchup versus the Alabama Crimson Tide (2-0).