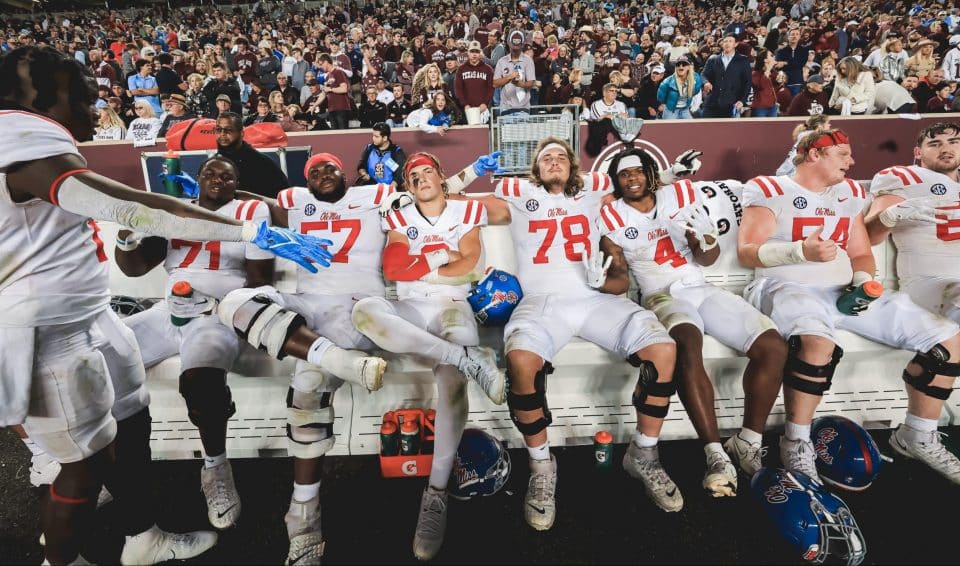 After experiencing the sting of the season’s first loss, Ole Miss looked to get back on track in a hostile environment versus Texas A&M and ultimately squeaked out a win.

The Rebels got out to an early 7-0 lead on an effortless drive in which Jaxson Dart found Dayton Wade for an 18-yard touchdown pass. Then, the thematic element of this season ensued with Ole Miss blowing yet another lead. Texas A&M, led by true freshman quarterback Conner Weigman, punched the Rebels right back, scoring on back-to-back drives to take a 14-7 lead.

Defensive lineman JJ Pegues executed a gutsy rushing attempt on a fake punt inside of Ole Miss territory, which essentially set up the opportunity for kicker Jonathan Cruz to nail a 46-yard field goal and reduce the deficit to 14-10 going into halftime.

Offensive woes experienced in the first half vanished in the third quarter. Ole Miss’ defense forced the Aggies to punt in a critical opening second half drive and the offense reclaimed the lead with a one-yard touchdown pass to tight end Casey Kelly. Another stalled drive from Texas A&M opened the pathway for Dart to throw his third touchdown of the game to Jonathan Mingo to give the Rebels their first double digit lead of the game.

Although momentum began to swing in Ole Miss’ favor, the Aggies continued to fight and added another touchdown to the board to cut the lead to 24-21.

Then, true freshman running back Quinshon Judkins continued his campaign for Freshman of the Year with an explosive drive to all but seal the game for his team. Judkins began the mid-fourth quarter drive with a 61-yard rush, followed by a 12-yard one, and finally found the end zone for his seventh consecutive game with a touchdown, giving the Rebels a 31-21 lead.

Texas A&M did not go down easy, even with a young quarterback making his debut against a conference opponent. Weigman drove the Aggies down the field in 10 plays and found standout running back Devon Achane for his fourth passing touchdown of the night, putting his team back in reach of the game.

Fortunately for Ole Miss, the defense, which had been tested all night, finally answered the bell and forced a turnover on downs to secure the victory as well as a best opening record since 1962.

Following the game, Lane Kiffin offered high praise for his team’s double-headed dragon in Quinshon Judkins and Zach Evans, while also taking a shot at the upscale talent Texas A&M has accumulated in recent years.

“I thought the running backs did well,” Kiffin said. “I mean, 390 yards of rushing against a bunch of five-stars is pretty good.”

Ole Miss (8-1, 3-1 Southeastern Conference) will return to Oxford for a much-needed bye week in preparation for a home matchup versus Alabama on November 12.