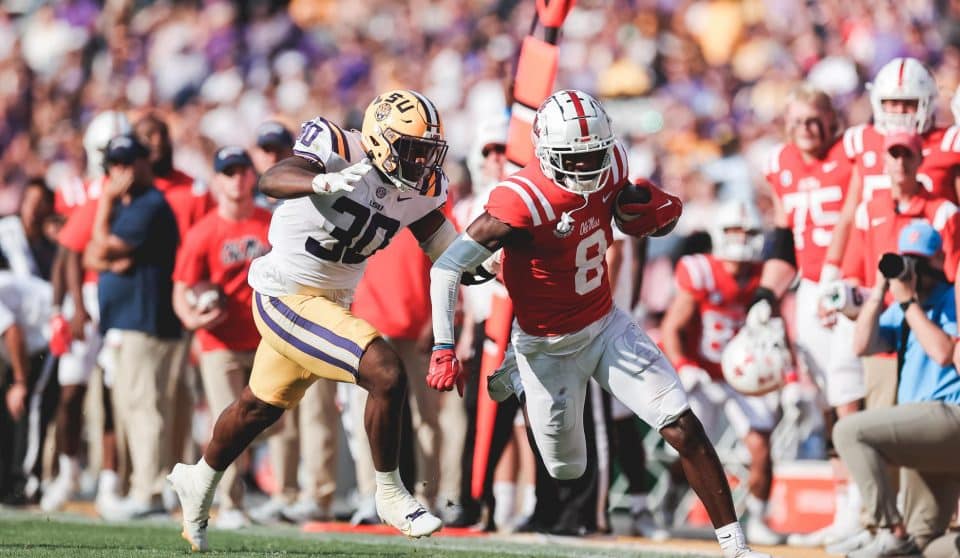 Although No.9 Ole Miss looked to start 8-0 for the first time since 1962, a trip to Death Valley against an emerging LSU team would ultimately end with the Rebels dropping their first game of the season.

Early on, a shorthanded Ole Miss offense, which lacked transfer running back Zach Evans, appeared to not miss a beat. The blazing-hot Rebels got off to a 17-3 start courtesy of a big first two drives led by Jaxson Dart, ending in back-to-back touchdowns by Quinshon Judkins.

Meanwhile, LSU took advantage of the Rebels’ defense that showed weakness in the run game just one week ago versus Auburn. The Tigers stole momentum from Ole Miss at the end of the first half by all but erasing a 14-point deficit as the Rebels led 20-17 at halftime.

Unfortunately for the Rebels, the second half was all LSU. Lane Kiffin’s offense showed light at times with a couple of drives that went into LSU territory but to no avail. The Rebels’ notoriously explosive offense moved the ball throughout the game, but struggled to find the end zone while the defense displayed an inability to prevent the Tigers from scoring touchdowns. LSU outscored Ole Miss 42-3 after its early 17-3 deficit.

The difference in offenses was seen on the ground, with LSU having the advantage, something atypical of a game involving this Ole Miss team thus far in the season. LSU had 252 yards on the ground, 121 of which were courtesy of dual-threat quarterback Jayden Daniels. Judkins was the overwhelming majority of the Rebels’ rushing attack with 111 of the team’s 116 yards.

In the passing game, Jaxson Dart held his own for the most part in his first true test on the road in a hostile SEC environment. The freshman quarterback went 19 for 24 with 288 yards and one interception. Mississippi State transfer Malik Heath led the Rebels in receiving with eight receptions for 145 yards.

Next up for the Rebels is another test on the road versus conference foe Texas A&M in College Station.