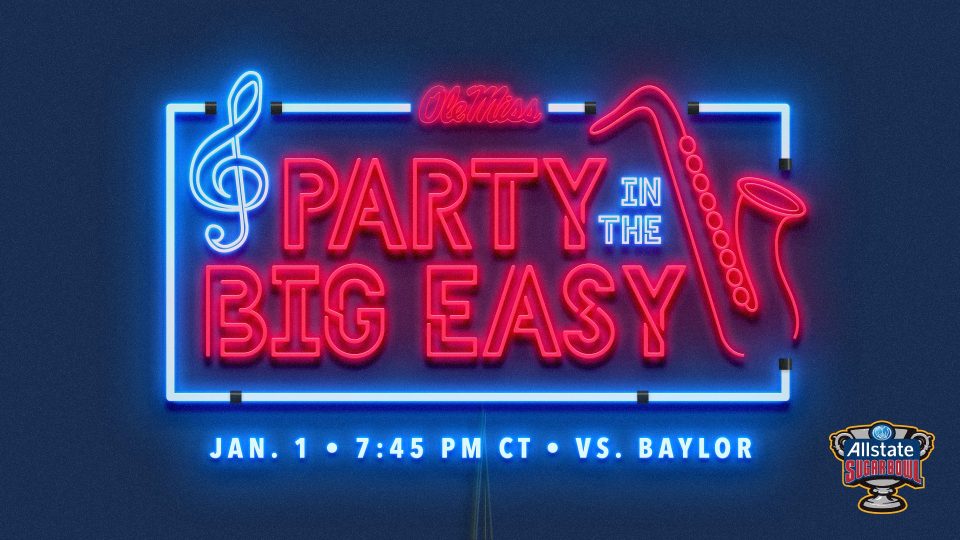 Tickets are also available on Ticketmaster >>

OXFORD, Miss. – After registering its first 10-win regular season in program history, Ole Miss has accepted an invitation to play in the Allstate Sugar Bowl in New Orleans, Louisiana, on Jan. 1, 2022.

“We are honored to play in the Allstate Sugar Bowl and continue our rich bowl tradition in one of the premier postseason destinations,” said Keith Carter, Vice Chancellor for Intercollegiate Athletics. “I’m proud of our student-athletes and coaches for their dedication and hard work, and they are very deserving of this opportunity to compete on the national stage.

“As our fans have showed in the past, Rebel Nation will show up in full force and turn New Orleans into Oxford South.”

“We are taking another big step in our growth toward being a championship program by earning a New Year’s Six berth in the Allstate Sugar Bowl,” said Ole Miss head coach Lane Kiffin. “I’m excited for our players to compete in one of the most tradition-rich bowls against a premier program in Baylor. We look forward to representing our university and the Southeastern Conference on this national platform.”

Ole Miss will appear in a bowl for the 39th time in program history. The Rebels’ all-time bowl record stands at 24-13, excluding the 2013 BBVA Compass Bowl victory that was vacated due to NCAA ruling. The Rebels lead the NCAA in bowl win percentage at .649. Elsewhere in the bowl record book, Ole Miss is 14th nationally in bowl wins and 21st in bowl appearances.

The Rebels are making their second straight bowl appearance after knocking off No. 7 Indiana, 26-20, last season in the Outback Bowl. Ole Miss is 12-2 in its last 14 bowl games, including a streak of six straight victories from 2002 to 2013

This will mark Ole Miss’ 10th appearance in the Sugar Bowl, the fourth-most among all college football programs. Only Alabama, LSU and Georgia have made it to the famed New Orleans destination more times than Ole Miss.

This is the Rebels’ first Sugar Bowl appearance since 2016 when Ole Miss defeated No 16 Oklahoma State, 48-20. Ole Miss made eight appearances from 1953-70, winning five of them.

The Rebels will take on a current Big 12 opponent for the 15th time in their bowl history and the third time overall in the Sugar Bowl. Besides the 2016 Sugar Bowl win over Oklahoma State, the Rebels defeated Texas, 39-7, in the 1958 Sugar Bowl.

This will be just the second-ever meeting between Ole Miss and Baylor on the football field. Baylor defeated the Rebels 20-10 in the 1975 season opener in Waco, Texas.

Tickets are on sale now here. The priority deadline to purchase is Sunday, Dec. 12. All ticket orders will be sorted in blue priority point order and allocated to the best available seats at each price point. In the event demand exceeds the Ole Miss allotment, orders will be reduced based on giving level with the Ole Miss Athletics Foundation.

MS timber businesses to get $15.7 million in pandemic assistance payments