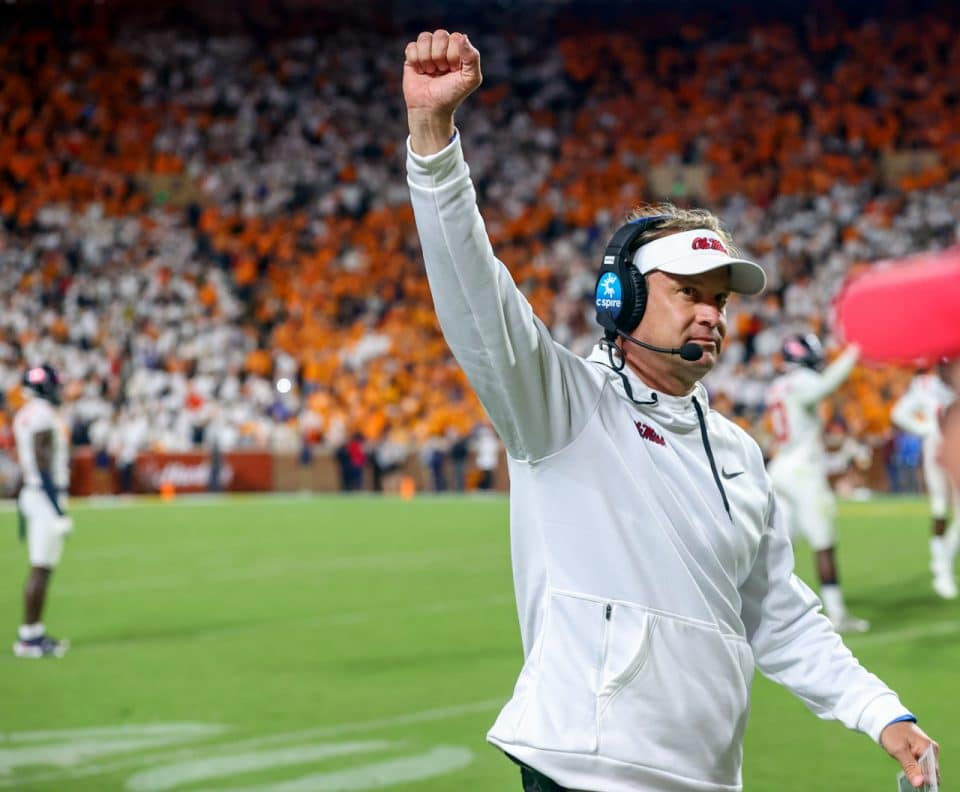 -$150,000 for each win against an SEC opponent, starting with the fifth SEC win of the regular season

-Regular-season victory against a non-conference, Power 5 opponent: $100,000 per win

-Participation in the Birmingham Bowl Or Independence Bowl game, or their successors: $50,000

-Participation in the Citrus Bowl or its successor: $125,000

OXFORD, Miss. — With the best regular season in program history in the books and a New Year’s Six bowl appearance upcoming, Ole Miss has agreed on a new contract for head football coach Lane Kiffin, as announced Saturday by Vice Chancellor for Intercollegiate Athletics Keith Carter.

In his second season at the helm of the Rebel football program, Kiffin has guided Ole Miss to a 10-2 record, the first 10-win regular season in school history. That includes a perfect 7-0 mark at Vaught-Hemingway Stadium, part of an ongoing nine-game home win streak for Kiffin’s teams.

The No. 8-ranked Rebels will now head into a New Year’s Six bowl and into recruiting season with their future solidified.

“We are committed to winning championships at Ole Miss, and Coach Kiffin is the person to lead us to those heights,” Carter said. “With his winning edge, offensive vision and recruiting prowess, he has quickly cemented our team among the best in the nation, and this is just the start. With major facility projects on the horizon, we are investing in this program like never before and look forward to building on the foundation that Coach Kiffin has established.”

“We are extremely appreciative of Chancellor Glenn Boyce, Director of Athletics Keith Carter, and the entire Ole Miss administration for their commitment and support of our football program,” Kiffin said. “Sustained success takes a commitment from everyone, and we are excited to continue the work to build a program that makes the entire Ole Miss community proud. I have a tremendous amount of gratitude for our fans, players, and staff. The future is bright! Hotty Toddy.”

Kiffin’s second year in Oxford was once again highlighted by one of college football’s most exciting offenses. For the second straight season, the Rebels lead the SEC in total offense at over 500 yards per game heading into bowl season. Ole Miss has eclipsed 600 yards of total offense 19 times under Kiffin after hitting that mark just 16 times in the program’s history before his arrival.

However, in Year 2, Kiffin proved he isn’t just a one-dimensional coach. The Rebel defense ranks as one of the top-five most-improved units in the FBS, allowing 13.3 fewer points per game this season compared to 2020.

Kiffin quickly turned the Rebels into an offensive machine in 2020, leading the program to an Outback Bowl win over No. 7 Indiana and a 5-5 record against an all-SEC schedule. Ole Miss ranked top 20 in the FBS in nine different offensive categories, including having the No. 3 team in the country in total offense, shattering the school record with 555.5 yards per game. The Rebels broke the SEC record for total offense in conference games (562.4 ypg), besting LSU’s mark of 550.0 yards per game set during the Tigers’ run to a national title in 2019.

The offensive explosion by the Rebels came as no surprise, as Kiffin has shown a propensity in helping turn programs around. In his first season at FAU, USC and Tennessee, Kiffin’s team improved in win differential (+3.33), scoring (+10.2), passing (+34.5 ypg) and rushing (+51.3 ypg).

Kiffin, who won two Conference USA titles in three seasons at Florida Atlantic, has a dozen years of head coaching experience, including 10 years at the NCAA level where he has posted an all-time record of 76-41.

Like Rudolph’s Nose, Entergy Mississippi offers tips to light up your holidays