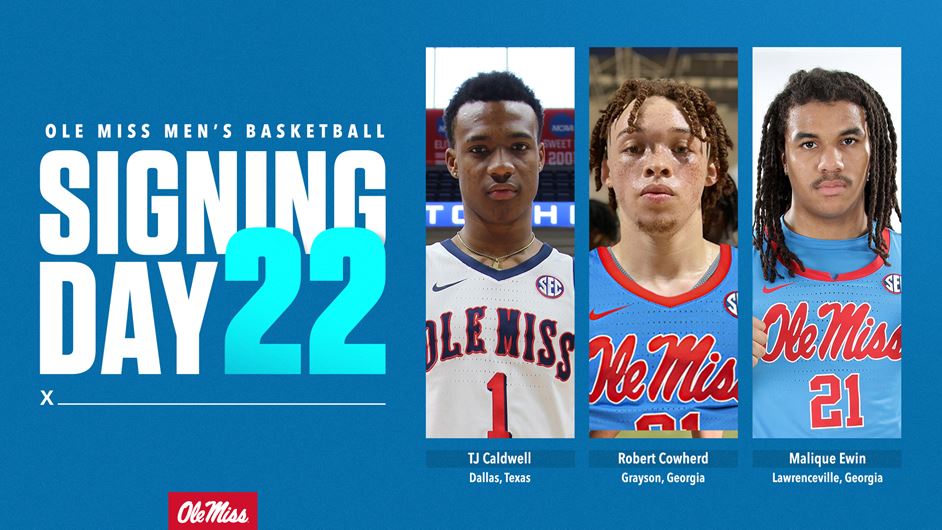 “We think we’ve got a point guard in TJ Caldwell, who is very athletic,” Davis said. “Robert Cowherd is a really good passer and can play the two and the three, which is the same in our system. And we really went after a skilled big in Malique. We feel really good about those three guys, and we look forward to continuing the process in the spring.”

Coach Davis: “TJ Caldwell we feel is one of the most athletic players in the class of 2022. He comes from an unbelievable family. We watched him a bunch on the EYBL circuit this summer. He can shoot from three, he has a great pull-up game, he can be an elite defender, he can play the one and the two. TJ is going to be a great addition to Ole Miss basketball.”

Coach Davis: “Robert is one of the toughest guys in the class of ’22. He’s like TJ, he’s an elite shooter. He can really shoot it from three. He’s got great size at 6-5, and he’s really tough. He’s one of those guys you go watch in practice and in games and he’s the first on the floor. He understands basketball, he has a good IQ and comes from an unbelievable family. He’s playing for a really good team in California, and we think Robert will have a great year.”

• Region 7-AAAAAAA Player of the Year

Coach Davis: “We watched Malique, and what we loved was his size and his skill. He can drive it, he can make a three, he can really pass it. He’s got real good footwork around the post, and I think he’ll be a guy that I’m sure will be in the conversation for Mr. Basketball in Georgia.”