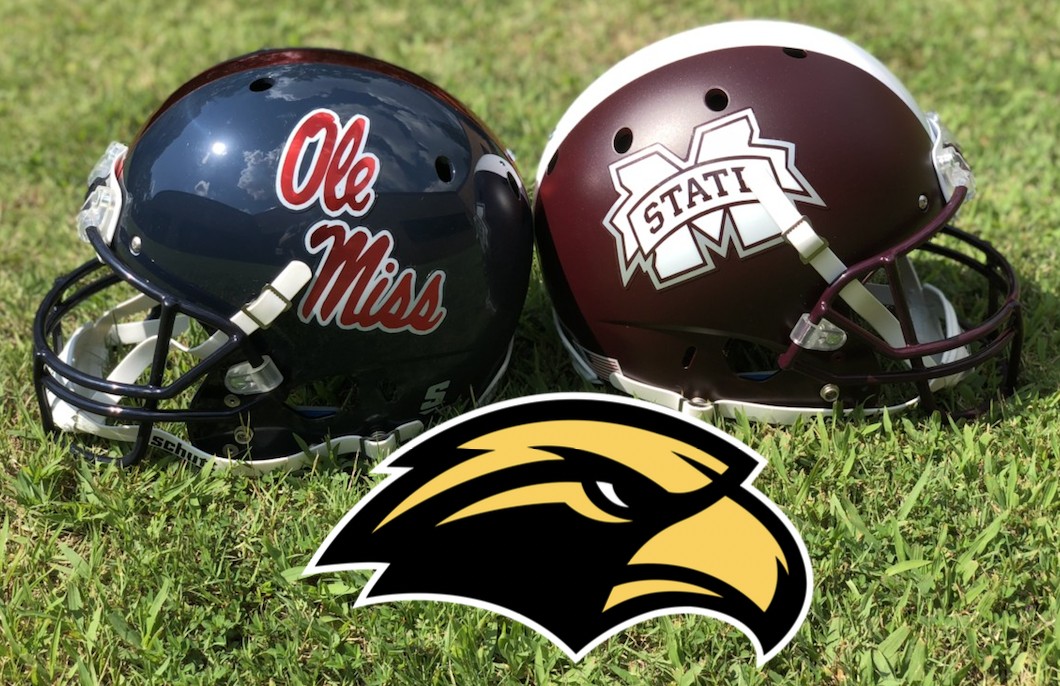 We’re less than 24 hours away from another busy college football Saturday in Mississippi. Ole Miss and Mississippi State welcome SEC opponents to their home fields and Southern Miss is on the road for a crucial C-USA matchup. Below, you’ll find a brief preview of each game.

Ole Miss sits at 3-4 and likely needs a win over Texas A&M on Saturday to keep their hopes of returning to a bowl game alive. To do so, the Rebels will need an improved effort on defense after allowing over 560 total yards in last week’s loss to Missouri.

Texas A&M’s offense lacks a true running game, but QB Kellen Mond can take advantage of a young Ole Miss secondary that has given up big plays throughout the season. Mond does also pose a threat on the ground, and head coach Matt Luke knows that the Rebels will be tested.

“He is good enough to run it, and they have designed quarterback runs. That’s the difference. It’s not just scrambling or zone read, they have some powers and some quarterback counters schemed up for him to run the football. Then, when you have a guy that can do that as well as throw it, it presents challenges,” Luke said.

Offensively, the Rebels will continue the use of a two-QB system to keep the Aggies off-balance with John Ryhs Plumlee and Matt Corral splitting snaps. Plumlee is the superior rushing threat, and while he has flashed the ability to throw at times, inconsistency led to Corral’s insertion into last week’s game. Luke stated that each QB offers strengths that they can utilize.

“We have two really good competitors that have unique skill sets,” he said “That’s the difference, most people have guys that are similar. I was very impressed with how they fed off each other and how unselfish they were, pulling for each other on the sideline.”

Coming off a loss to Tennessee, Mississippi State faces a tough test with #2 LSU coming to Starkville. LSU comes in with an undefeated record with Heisman-contender Joe Burrow leading an offense that’s firing on all cylinders. The Bulldogs have forced 16 turnovers this season and will need a few on Saturday if they hope to pull off an upset.

After weeks of back and forth between QBs Tommy Stevens and Garrett Shrader, Joe Moorhead has decided to put the true freshman in charge of the offense moving forward. Shrader has appeared in 5 of the Bulldogs’ first 6 games and has thrown for nearly 600 yards while adding 375 more on the ground. Moorhead has been recruiting Shrader for a long time and he’s already seeing the leadership ability from his young QB.

“I have kind of had it in my head for the past three years that he was going to be a guy that is going to be able to lead whatever program he goes to, to great things. I think from the time he has stepped on the field, to the helicopter run, to everything that he does on a daily basis in terms of competitiveness and preparation, and quite frankly performance, has earned the respect of his teammates,” Moorhead said.

Kylin Hill has been bottled up in Mississippi State’s last two outings, totaling just 58 yards. Earlier this week, Moorhead said that improvement in the downfield passing game will open things up for the talented RB.

“The last two games have not been up to standard but that is going to happen. There were games at Penn State, where we had arguably the best player in the country, defensive would do some unique things to keep the cap down. The difference was when that was happening, we were able to create explosive plays down the field with the pass game. That is something I have talked about in the past that when they are bottling up the run game, we have to find a way to take advantage of it and move the ball and creating points in other areas,” he explained.

Kickoff from Davis Wade Stadium is set for 2:30 with the Bulldogs coming in as 17.5-point underdogs.

Southern Miss is off to a 2-0 start in conference play, and they’ll travel to face Louisiana Tech for a critical matchup in the Western Division of C-USA.

The Golden Eagle offense presents a challenge to opposing defenses with Jack Abraham under center. The reigning C-USA Offensive Player of the Week ranks top-10 nationally in passing yards per game (322.7), completion percentage (71.7), yards per attempt (10.8) and passing efficiency (179.6).

USM only allowed 122 yards on the ground in last week’s win over North Texas, but the Bulldogs will put the Golden Eagle rush defense to the test. In their win over UMass last week, La Tech rushed for for a season-best 385 yards. As a unit, the Bulldog offense ranks 1st in scoring (34.0 ppg) and total offense (467 ypg) in C-USA.

Rae Andreacchio, A Mother in Mourning