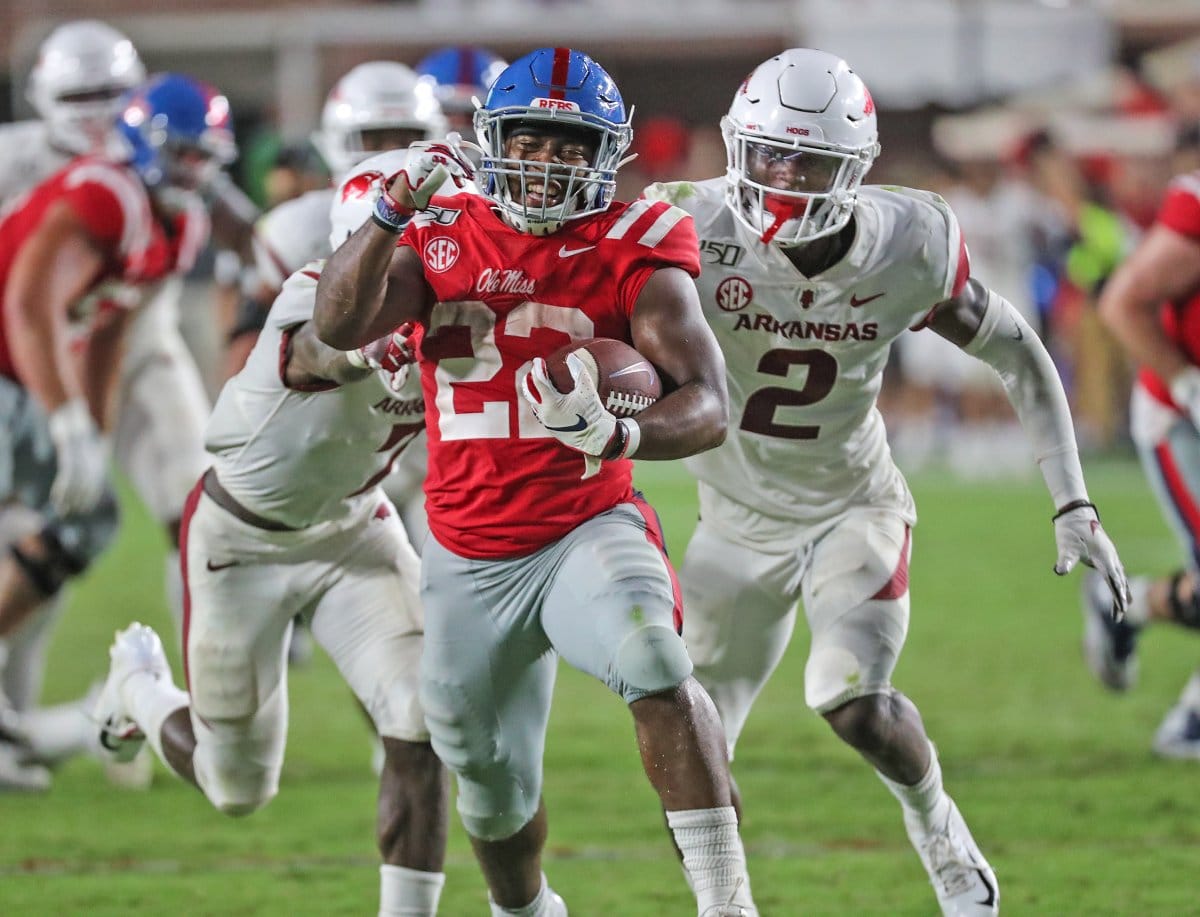 OXFORD — It was a collective exhale of sorts.

Ole Miss snapped its six-game losing streak dating back to last season with a 31-17 victory over Arkansas on Saturday evening.

The offense looked better than it did a week ago. The Rebels totaled 483 yards. Matt Corral was 16-of-24 for 246 yards and two and two scores. Elijah Moore caught seven balls for 130 yards and recorded the first multi-touchdown game of his career, a feat he sealed with a nifty snag and cut over the middle for a 46-yard touchdown pass to restore a two-score lead after a disastrous fumble from Octavious Cooley that gave Arkansas new life after it returned the gaffe 73 yards for a touchdown.

It was an important moment for this young offense. Adversity struck. The game had a chance to go sideways and rather than wilt, the unit responded.

“That was a really great drive for the guys,” offensive coordinator Rich Rodriguez said. “To give them an easy touchdown like that, it was a good sign for our guys to go down the field and make some big plays.”

Scottie Phillips rumbled for 143 yards and two scores. He plugged away for 5.5 yards per carry.

On the surface, the victory was steered the program away from what would’ve been a catastrophic 0-2 start to the season. It also painted a brighter outlook on how the season could potentially turn out.

What would’ve been made of the state of the program if it hard started 0-2 with a loss to an Arkansas team that clipped a four-win FCS school by a whopping seven points last week?What’s there to point to for an increasingly apathetic fan base searching for signs of progress? Another anemic performance from the Rebels offense could’ve potentially foreshadowed a disastrous season to come. Any hope of reinvigorating the fanbase would’ve been lost in a defeat. That’s why this game was being dubbed a must-win, which is usually a strange label to bear for a game in the first week of September. But that’s exactly what it was.

“This was a big game,” Luke said. “People started saying ‘Is this a must-win?’ on Monday, and I don’t necessarily think that. But I’m proud that these guys continued to battle out of this cloud we’ve been under and keep fighting. I think it’s good for our fans to have something good, to have an exciting night in our stadium to try to build on and move forward.”

Ole Miss has a long, arduous path ahead as the program tries to get back to the postseason for the first time since the 2015-16 Sugar Bowl. It is far from out of the woods yet. It must go 3-5 in SEC play and win its remaining three non-conference games to reach six wins. A win tonight was never going to guarantee that. But a loss would’ve virtually guaranteed the Rebels would not go bowling. And, if nothing else, it breathed some confidence into a team that struggled mightily in week one and has had very little to point to in terms of tangible success. Luke said he faced a confident locker room in his postgame speech. The second-year head coach can sense that growing amongst his youthful group.

The Rebels looked remarkably better up front. Matt Corral was sacked just once. They ran the ball with more consistent success. Freshman left tackle Nick Broeker got his first taste of college football as he alternated drives with senior Michael Howard. The team rushed the football 53 times for 237 yards. That’s 4.5 yards per carry. Rodriguez dispersed the ball more liberally to his playmakers. Jerrion Ealy had seven touches and Snoop Conner ran it six times behind Phillips’ productive day.

“We were much sharper,” Phillips said. “The offensive line did a great job of making corrections. I did the easy job of finding the hole.”

Oh, and of course, Elijah Moore was special. The sophomore slot receiver showed flashes of this in a freshman year in which he compiled 36 receptions and cracked the rotation amongst a loaded receiving corps.

“He and I have done a good job of being on the same page,” Corral said. “We had to respond.”

Moore is quickly becoming Corral’s most trusted target. With senior Braylon Sanders unable to play with a hamstring issue, someone on an inexperienced receiving corps had to elevate their game. Dontario Drummond had a couple of early catches and did some good things. But Moore’s impact was felt more than anyone’s. He doesn’t mind being the responsibility of being the guy. He speaks like a man whose known for a while he’d carry a heavy responsibility in 2019.

“I am ready for it,” Moore said. “I am ready for positions like this. People have to step up. It’s like last year when D.K. went down, someone had to step up. I know I am going to have a big role in this offense. I feel like we did what we were supposed to do.”

The game didn’t come and go without damage. Mohamed Sanogo injured his right ankle on Ole Miss’ first punt of the game and was carried off on a cart before the defense played a snap. Luke called the injury “heartbreaking,” and while he didn’t have specifics of the injury, Luke said Sanogo will miss significant time.

Donta Evans filled in after Sanogo exited. Mike MacIntyre played a number of guys there like senior Willie Hibbler and sophomore Jacques Jones — who led the team in tackles with nine. It will be next to impossible to replace Sanogo, but the Rebels are now tasked with minimizing the effect of his absence.

Arkansas was abysmal offensively, but Ole Miss should receive credit for keeping a lowly unit down. The Razorbacks had just 61 yards on the ground and were held under 400 yards of offense for the game (361). Rakeem Boyd, who torched Ole Miss last season for 119 yards on seven touches before he prematurely exited the game with an injury, was bottled up for 67 yards on 12 carries. The Razorbacks netted 2.3 yards per rush on the night.

“We really concentrated on stopping the run,” MacIntyre said. “Boyd is an excellent runner and we never really let him get going.”

Texas A&M transfer Nick Starkel replaced a struggling Ben Hicks at quarterback after halftime. Starkel led the Razorback’s only crying drive late in the fourth quarter. Before the score with a little over three minutes left and the game in hand, Ole Miss was on the cusp of going six consecutive quarters without allowing a touchdown. It will be easier to gauge just how improved this defense is when it faces competent offenses, and make no mistake about it, Memphis and Arkansas do not fit that category. But this defense is definitely improved in how it tackles, surrounds the football and seems to have a better understanding of what it is doing schematically on a given play.

Like the offense, the confidence on the defensive side is growing. Winning helps breed it, of course. Ole Miss has a long way to go, but its preseason aspirations are still intact. A loss would’ve likely dismissed any shot of reaching a bowl. A win brought with it a collective exhale.

“You just want them to keep working and believing in what they’re doing,” Luke said. “Because these guys have worked really hard and you want them to believe in that process that ‘Hey, what I’m doing is working.’ They say ‘I know this is going to work’ and have this confidence, especially for those young guys. I think there was a confident group in that locker room tonight.”