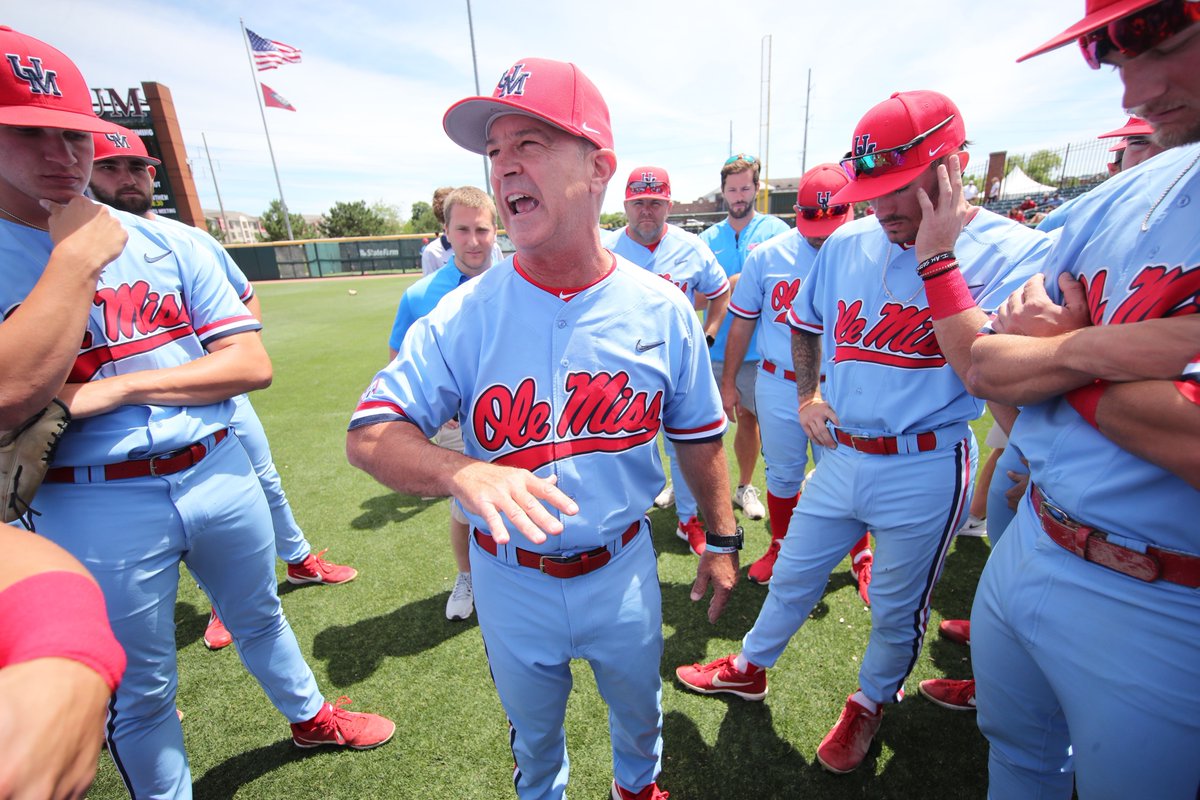 FAYETTEVILLE — The result of the Fayetteville Super Regional was a microcosm of Ole Miss’ 2019 season.

Ole Miss was bludgeoned, 14-1, by Arkansas on Monday afternoon in a winner-take-all game three. It was last of three volatile games that were each heavily one-sided. Arkansas blistered the Rebels 11-2 in game one. They responded with an emphatic 13-5 victory to set up the Monday showdown with an Omaha birth on the line.

Laboring starter Gunnar Hoglund — a guy who was presumably on a short leash due to his track record, coupled with the ballpark conditions and what Ole Miss had left in the bullpen — was left in too long. Opponents hit .625 the second time through the batting order when facing Hoglund. He’d already given up two runs in the second inning when leadoff hitter Trevor Ezell stepped into the box as the Razorback order turned over. Arkansas had just taken a 2-1 lead and had two runners on with two outs. Austin Miller was warming up in the bullpen. Hoglund remained in the game and gave up a 2-RBI single to increase the lead to 4-1. Arkansas left Ole Miss in the dust after that.

“The truth of the matter is we needed some length to get through the game,” head coach Mike Bianco said. “We had Miller and we had Caracci, but we needed length.”

Hoglund was granted a third inning. He put the first two aboard and then was pulled in favor of Miller. The decision was likely rendered moot as the game wore on. The normally sturdy Miller was ineffective and his successor, Parker Caracci, struggled as well. Arkansas plated 14 runs in six innings. The final three frames were a mere formality. After ousting Razorback starter Patrick Wicklander in the second inning, Ole Miss did nothing against Razorback relievers Cody Scroggins and Jacob Kostyshock.

These three days in Fayetteville mirrored the trajectory of Ole Miss’ 2019 season. This group was marred by inconsistency through most of the regular season. At times, it looked like an offensive juggernaut. It beat this same Razorback team twice in late March. The Rebels are the only team since May of 2017 to win a series at Baum-Walker Stadium. This group erased a 37-year streak of losing in Baton Rouge when it took two of three from the Tigers in early May. But it also lost series to Missouri and Kentucky. It dropped a baffling midweek contest to North Alabama, a program in its first season at the Division I level. Ole Miss barreled over Florida and Texas A&M in a pair of home sweeps. It was also swept by Mississippi State a week after its triumph in Baton Rouge, which sparked a free fall that saw the Rebels go 1-6 in the final two weeks of the regular season including a loss to lowly Arkansas State, the final of a few non-conference pitfalls that ballooned the club’s RPI. It made their hosting case a complicated one.

The 2019 Ole Miss Rebels were a difficult group to figure out.

“My freshman year, we were not a very good baseball team,” Thomas Dillard said. “Last year was one of the best teams I have ever played on. It seemed like we were in every game we played in. This year was a little of both. We went through periods where we were really dominant. We went through periods where it looked like we’d never picked up a baseball.”

Dillard was a member of the best recruiting class in school history. The bulk of that top-ranked 2016 class, in all likelihood, saw their careers come to an end on Monday. The group leaves behind a complicated legacy comprised of triumphs and postseason heartbreak. As Dillard mentioned, their freshman season in 2017 brought hard lessons. The team missed the NCAA Tournament for just the third in the Bianco era.

But then they began to grow up.

“Coming from up north, I didn’t mesh with some of the guys,” Cooper Johnson said. “I don’t think I understood a lot of them and I don’t think all of them understood me. Over the three years, these guys have grown into my best friends.

“I couldn’t be more thankful or proud of the way we have grown since freshman. We’ve gone from boys to men.”

Then there was the 2018 season that brought with it a SEC West crown and an SEC Tournament Title. That team resembled a freight train, barreling over opponents en route to a No. 4 national seed, only to see it all come unraveled on a somber Monday night last June when Tennessee Tech beat the Rebels twice in one day, ending their season in astonishing fashion.

Then there was the 2019 version. The team spun its wheels for three months, only to find itself in late May. Ole Miss entered the SEC Tournament as lifeless group on the heels of a six-game losing streak. It fought through the loser’s bracket in Hoover all the way to its second straight SEC title game. It was enough to catapult the team back into the hosting conversation. The Rebels earned the No. 12 national seed and plowed through their regional. The team’s personality began to show. It adopted a looser mindset and played with a sense of confidence it hadn’t boasted all year.

“Three weeks ago no one thought we would be here,” Bianco said. “They hung together and got within one game of Omaha.”

The core of the 2016 class  — three of whom played high school baseball just a couple miles away from Swayze Field — will exit the program without a trip to the College World Series.

There were a lot of moving parts to this team. It struggled to solidify its rotation for the first six weeks of the year. Doug Nikhazy fixed upon his insertion into the weekend rotation in March. He became one of the better freshmen pitchers in the country. There were times where the offense struggled to score runs — like a seven game stretch in April in which the Rebels didn’t plate more than five runs in a game. In the four games prior, the Rebels plated 51 runs in four contests. The bullpen was the backbone of the team from the end of March through April. It crumbled during the six-game losing streak in May.

“This was a different team,” Bianco said. “Last year’s team was so good from start to finish. We really didn’t have a string where we played bad. This team was the total opposite. We had some weeks where we were as good as any team in the country. There were some weekends we would like to forget. We just had a lot of what.”

The run in Hoover is where it all seemingly meshed together after three-and-a-half months of instability. Ole Miss should be commended for that. It could have rolled over, but it kept plugging away. In some ways, it stepped out of its comfort zone. Bianco shook up the lineup. Dillard began to bat leadoff. Whether he had a choice or not, he continued to trust Parker Caracci through his struggles. The team let its hair down a bit and that relaxed mindset helped them as much as anything else.

But in the end, the Rebels came up one game short. On Monday, Ole Miss succumbed to insufficient pitching. The bats went silent for two of the three games. Fair or unfair, the legacy of both this 2019 team and 2016 class isn’t as pristine without a trip to Nebraska. But its end-of-the-year turnaround shouldn’t be forgotten.

“As a coach you kind of scratch of your head,” Bianco said. “Was it the pressure? Was it the expectations going into the season? But I think this team will always be remembered for being here. Unfortunately, it ended one game short of Omaha.”