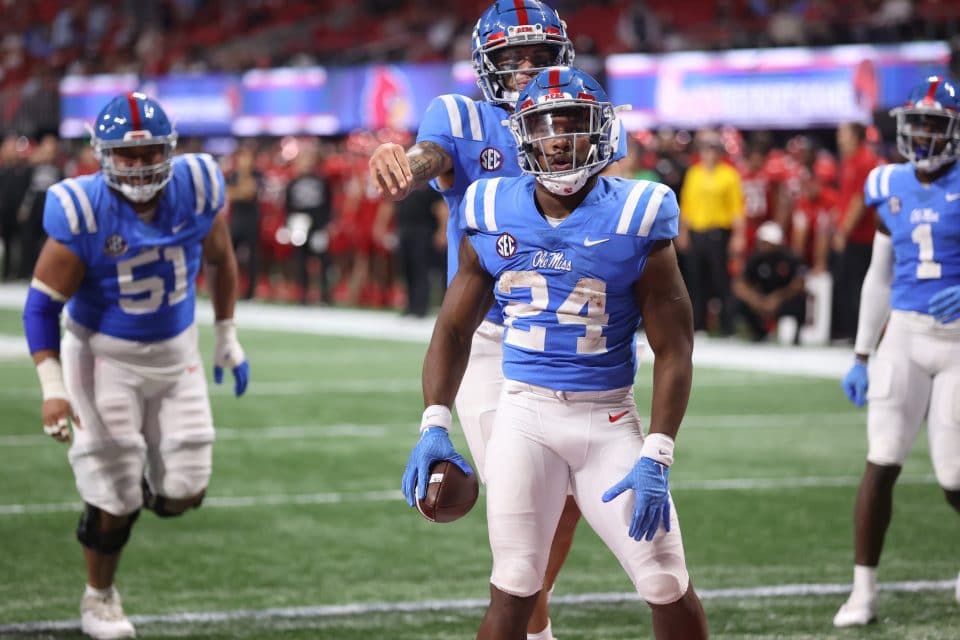 No Lane Kiffin, no problem.

With their head coach absent from the Rebel sideline after testing positive for COVID-19, Ole Miss put on a show in Atlanta in a 43-24 win over Louisville in the Chick-Fil-A Kickoff Classic.

All-SEC quarterback Matt Corral completing 22 of his 33 passes for 381 yards and accounting for two touchdowns (1 passing, 1 rushing) wasn’t all that surprising considering what he accomplished in year one in Kiffin’s system. What was surprising was the performance by the Rebel defense. A unit that ranked among the nation’s worst in 2020 pitched a first-half shutout as Corral and the offense built a 26-point cushion heading into the locker room.

Tonight marked the first time that Ole Miss has shut out an opponent in the first half since a win over Georgia in 2016. Newcomers including Maryland transfer LB Chance Campbell and Jake Springer, a DB transfer from Navy, made an instant impact for the Rebels while veterans like Sam Williams, Tariqious Tisdale and Ashanti Cistrunk showed vast improvement from a season ago.

While Malik Cunningham and the Cardinal offense found some rhythm in the second half, the Rebels kept their foot on the gas and continued to distance themselves on the way to a season-opening victory.

Running back Jerrion Ealy got the scoring started on the Rebels opening drive but Snoop Conner’s second score of the night, which put Ole Miss up 36-10, will be the highlight reel moment from the group of talented backs for the night.

Damn, Snoop. That man has a family. pic.twitter.com/tdldwOUaYz

Entering the 2021 season, many wondered what the Rebels’ wide receiver room would look like without Elijah Moore. The group answered the call in Atlanta, led by Dontario Drummond who caught 9 passes for 177 yards and a touchdown.

The kicking game also showed noticeable improvement; a welcomed sight for Ole Miss fans. Caden Costa took over kicking duties after a missed PAT by Cale Nation on the opening possession and went 3/3 on field goals and 4/4 on PATs.

Targeting was a topic of conversation throughout the night as LBs Mark Robinson and Lakia Henry were each ejected. Two Louisville players were also tossed.

Ole Miss will take on Austin Peay next week in their home opener and will presumably have their head coach back as well.

Thunder & Lightning: Are There More Questions Than Answers After Mississippi State’s Win?

Dolphin stranded in Louisiana during Ida rescued and released in Mississippi