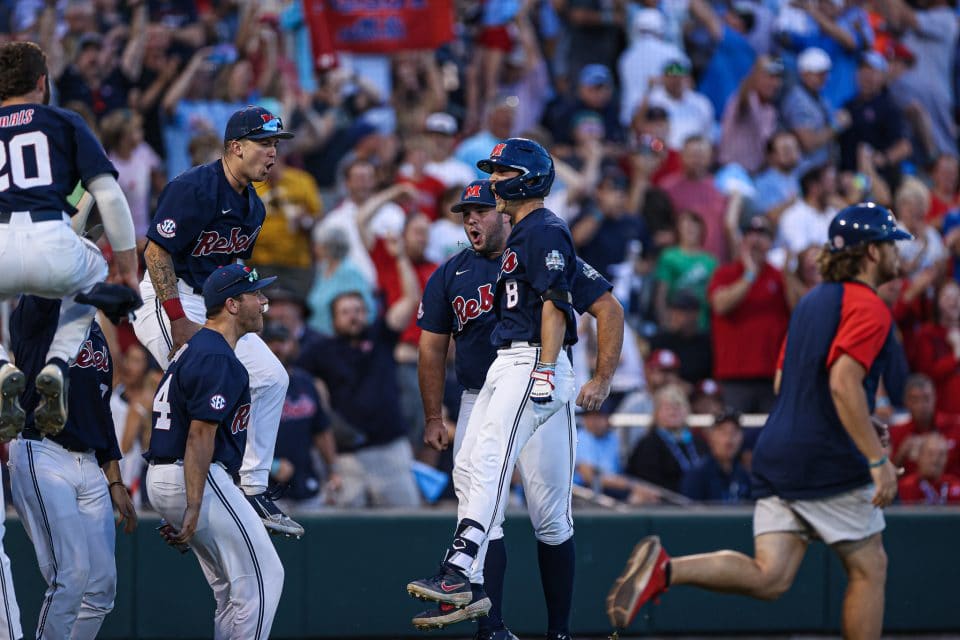 The Rebels are one win away from their first national title in program history after a dominant victory against Oklahoma by a score of 10-3.

Ole Miss did not waste any time getting on the scoreboard. An RBI single hit by LF Kevin Graham scored team captain Tim Elko to give the Rebels their first run in the College World Series championship series. DH Kemp Alderman followed up with an RBI single that scored Graham, giving the Rebels an early 2-0 lead in the top of the first inning.

In addition, the Rebels continued to score as an RBI single hit by senior 3B Justin Bench knocked in RF Calvin Harris in the second inning. Tim Elko proceeded to rope a solo line drive home run in the third inning to give Ole Miss a 4-0 lead.

Oklahoma, on the other hand, struggled offensively due to a dominant start by Ole Miss sophomore RHP Jack Dougherty. The Sooners were unable to get their bats going until the sixth inning when the team loaded the bases and scored off a throwing error and a walk.

Fortunately for the Rebels, the offense punched right back. Back-to back-to-back home runs hit by CF TJ McCants, RF Calvin Harris, and 3B Justin Bench in the top of the eighth inning would add four insurance runs and essentially put the game away. This was the first time this feat had been accomplished in the CWS since 1998.

“It felt like Swayze Field because of how many Ole Miss, and because how partisan maybe it was,” said Coach Mike Bianco on the crowd at Charles Schwab Field. “But man, it felt like a football game out there. On the field, it was that loud. Swayze’s been pretty loud, but I don’t know if it’s ever been that loud.”

The two teams will face off again on Sunday, June 26 at 2 p.m CT. The game can be watched on ESPN.

WATCH: Palazzo and Ezell debate ahead of June 28 runoff