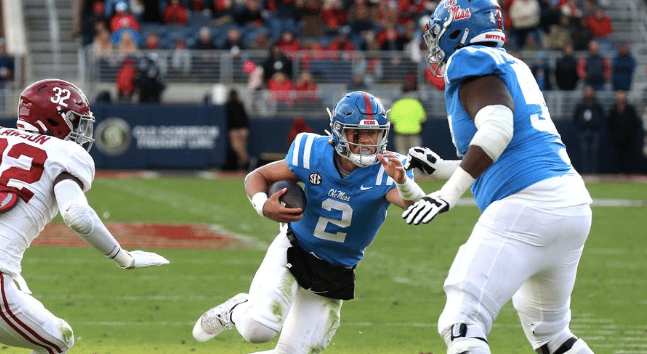 Ole Miss is gearing up to play in its third consecutive bowl game under head coach Lane Kiffin as the Rebels are scheduled to face off against Texas Tech on Wednesday night in the TaxAct Texas Bowl.

After losing its last three games of the regular season, Ole Miss (8-4, 4-4 SEC) will look to end the season on a high note against the Red Raiders (7-5, 5-4 Big 12) who went on a three-game win streak to conclude the regular season.

“We look forward to making our first appearance in the TaxAct Texas Bowl and continuing our rich bowl tradition,” Ole Miss Athletics Director Keith Carter said. “Houston is one of our largest and most passionate alumni bases, and this game presents an excellent opportunity to join the Ole Miss family in the Lone Star state. We are grateful for this national platform, and we expect Rebel Nation to be well represented.”

For the Rebels to find success offensively, it will be imperative to put the ball in Quinshon Judkins’ hands. The freshman running back leads the SEC in both yards (1,476) and rushing touchdowns (16). Quarterback Jaxson Dart will also play a vital role in the game plan. The freshman signal caller will be presented with plenty of opportunities to use the passing game as a means to keep the Red Raiders’ defense from going all in to stop the run.

Defensively, Ole Miss will have to stop the run and prevent explosive plays. The Rebels give up an average of 161.8 yards per game on the ground and opponents have averaged 218 yards in the air this season. The defense will rely on linebackers Troy Brown and Austin Keys to act as a stop gap to slow TTU’s ground attack. Senior safety AJ Finley, who leads the team in solo tackles, will also be impactful in keeping opposing gains in yardage to a bare minimum.

The Red Raiders will be lining up against an Ole Miss defense that has had very good games and very bad ones throughout the regular season. With an offense that averages nearly 330 passing yards per game, Texas Tech will look to utilize its weapons, specifically standout freshman wide receiver Jerand Bradley, against the Rebels’ defensive backs. TTU will also rely on senior running back SaRodorick Thompson to gash the Rebels’ three-man defensive front and extend drives on the ground.

Texas Tech will be faced with the grueling task of slowing down the Ole Miss rushing game that features Judkins as well as a fully-healthy Zach Evans. The Red Raiders will look to its leading tackler, linebacker Krishon Merriweather, to be a catalyst to limit an offense that averages 261.6 rushing yards per game. TTU’s secondary will also focus on keeping the ball out of Jonathan Mingo and Malik Heath’s hands, so that Dart will be restricted in the passing game.