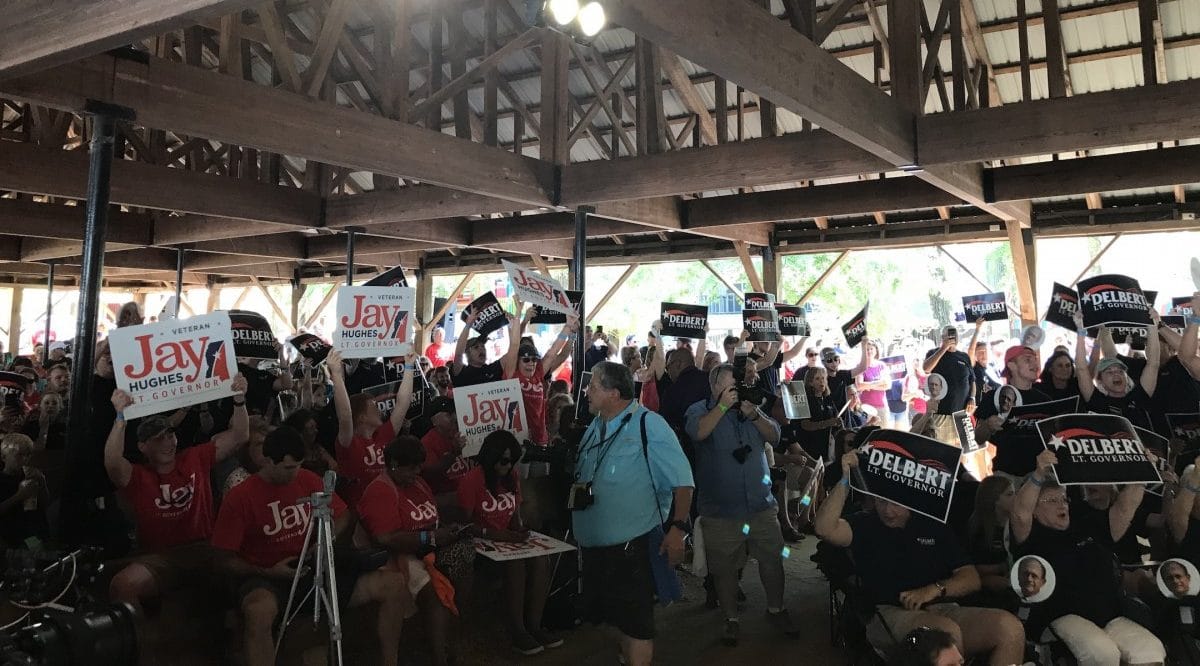 Neshoba County Fair has long been known as the hot spot for politicians to meet with their constituents and the time-honored tradition of the stump speeches was in full swing this year as political candidates running for various state offices took the stage for a final big pitch before the primary election on Tuesday, August, 6th.

In the Lieutenant Governor race, Republican Shane Quick touted his blue-collar experience saying he will focus on healthcare. Democrat candidate Jay Hughes said healthcare, roads, and bridges are key to Mississippi’s success while education which has been Hughes’ big campaign point “let the teachers teach,” was met with applause and cheers from the audience.

Republican Delbert Hosemann focused on his experience as Secretary of State and said he will work to increase teachers salaries to an acceptable level.

“Staying in Mississippi and teaching our children shouldn’t have to be an economic decision for our teachers,” said Hosemann.

“No Mississippian should be any further than 30 minutes from an ER and starting next year, they won’t be,” said Hosemann who also touched on the economy saying every Mississippian deserves the opportunity to have a living wage.

In the Secretary of State race, Dr. Johnny Dupree (D) who is the longest-serving Mayor in the history of Hattiesburg said schools can benefit from 16-section land and said Mississippians need to vote more than they have in the past.

“With our history in Mississippi, we should be number one in voting participation,” said Dupree. “We need to make it easier for people to vote not harder.”

To do this, Dupree suggesting going back to the paper ballot to increase the voter confidence and participation, something which he said he agrees with President Trump on. He added that there needs to be campaign finance reform in the state so that people from all backgrounds can run for office, not just those with money.

There was a fairly heated exchange between Michael Watson and Sam Britton with both taking jabs at the other. Watson who said Governor Phil Bryant asked him to run for the office of Secretary of State said he knows the responsibilities of the office and what those entail while his opponent did not realize the state already had voter ID laws in place.

“I am the only conservative candidate in this race that does not have a history of supporting Democrats,” said Watson of Britton. “I’ve got the record, I’m prepared from day one and am willing to do right by the state.”

Britton attacked his opponent saying Watson did not stand with President Trump at the Republican National Convention and said that the former Senator voted for one of the largest corporate bailouts in the history of the state.

Dealing with the Secretary of State’s office, Britton says he will work with local and state officials to make sure the elections are fair and secure, also says 16th section land needs to be treated fairly. Britton’s big point focused on the state’s economy.

“We don’t want the children of Mississippi leaving this state looking for opportunity,” said Britton. We need to create that opportunity right now, here in the state of Mississippi… Mississippi’s future has yet to be written. It will be what we make it to be. It is up to us, the responsibility is on us.”

“I will fight for healthcare workers, the clinics, and the hospitals in and around Mississippi.

Chaney spoke about the numerous things his office has been working on with Associated Health Plans and mentioned their work with MEMA on flooding in the Mississippi Delta saying the first thing that needs to happen is to get the pumps installed. Chaney also presented checks to various cities and towns across Mississippi for rural firetruck funding. He said the program has been estimated to save MS homeowners $1.6 billion since the program began in 1995.

Current State Auditor Shad white is the lone candidate in the race and spoke of the accomplishments which his office has made in the past year saying he is excited to continue on the same course of ensuring public dollars are being properly spent over the next four years.

“The reason I talk about these cases, is because I want people to know that they will have to get by me before they get away with something,” said White. “I’m not here to make people feel comfortable. If you want to feel comfortable, go buy a puppy.”

White also said they have focused on cybersecurity and looked for ways to improve it within their office and state government.

Ricky Cole (D) spent his time stumping for the position as Agriculture Commissioner by saying the first thing he wants to do is go to the legislature and remove the sales tax on food produced in Mississippi. He says there should be an additional focus on healthy eating.

Current Ag Commissioner Andy Gipson who said he was on the phone with the White House on Tuesday about building the pumps in the Delta gave a rallying cry of “Finish the Pumps” which became a refrain among various politicians throughout the day.

“From local foods to local families, to Taiwan, or wherever we can sell, we are going to grow Mississippi agriculture like never before,” said Gipson.

Transportation Commissioner Dick Hall (R) is another politician who will not be running for office this year but spoke saying Mississippi’s issues haven’t changed in the four decades he has been in office.

“The issues we discussed 40 years ago were education, healthcare, and Infrastructure,” said Hall. “Those are still the issues being discussed today.”

Hall also took his time at the podium to endorse Butch Lee (R), the current Mayor of Brandon to take over as Transportation Commissioner.

During Lee’s time at the podium in the afternoon, he spoke about the importance of improving Mississippi’s roads and said the state’s farmers are counting on decent infrastructure to transport their products in some cases to India.

“If we don’t get to work fixing our roads, we better teach those chickens to swim, because that’s the only way we’re going to get them there,” said Lee.

Marcus Wallace (D) who is serving in his second term as the Mayor of Edwards. has a different approach to the office and said in addition to fixing the state’s roads and bridges he will focus on the beautification of the state adding that it is important to “light up” the rural areas.

“The first thing we have to do is demolish and dismantle the political relationships in the Capitol,” said Wallace.

He continued saying they have to find a better way to do the appropriations process than relationships.

This was a stark contrast to Senator Willie Simmons (D) speech which focused on his ability to work with politicians from any side of the aisle.

“Nowhere did I see a road sign that said Republican, Democrat, or Independent Highways,” said Simmons. “I am going to go into the position working across party lines.”

Simmons, who has served as the Chairman of the Senate Highways and Transportation Committee, spoke on the gas tax saying an update is needed in the state.

“I am going to be recommending that we increase it by 10 cents over a three-year phase-in period,” said Simmons.

This would put the state at the regional level with Tennesse, Louisiana, and Arkansas.

“Every time we put a penny on, we will get $22 million a year. 22 million times 20, is 220 million dollars that can go toward taking care of our state highways, roads, and bridges.”

The candidates running for Central District Public Service Commissioner are Bruce Burton (D), DeKeither Stamps (D), Ryan Brown (D), Brent Bailey (R), and Nic Lott (R). The candidates running for Central District PSC focused most of their time at the famous blue podium talking about the ways they would each work to improve rural access to broadband and put an end to illegal robocalls.

Nic Lott (R) has been endorsed by Governor Phil Bryant and Senator Roger Wicker and touted his relationship with Wiker saying they would work together to stiffen the penalties for those who do not obey the rules of robocalls.

Ryan Brown (D) received the endorsement of Current Central District PSC Cecil Brown (D) who is not running this term but spoke at the fair. Brown used his time to slam the Republican leadership in the state on everything ranging from Healthcare to the economy, roads and bridges, and education.

Current Public Service Commissioner Cecil Brown (D) speaks for the last time at the Neshoba County Fair. He is supporting Ryan Brown to take over his position. pic.twitter.com/MkRZVv6uGg

“We have missed out on billions of dollars of federal money and thousands of new jobs,” said Brown. “Thirty-seven states have expanded Medicaid and 20 of those states have Republican governors. In those states healthcare outcomes have improved, lives have been saved, and jobs have been created. I don’t think missing out on billions of dollars and thousands of jobs is very conservative. I don’t care if we call it ObamaCare or TaterCare. We need to expand Medicaid.”

Nic Lott has been endorsed by Governor Phil Bryant and Senator Roger Wicker and touted his relationship with Wiker saying they would work together to stiffen the penalties for those who do not obey the rules of robocalls.