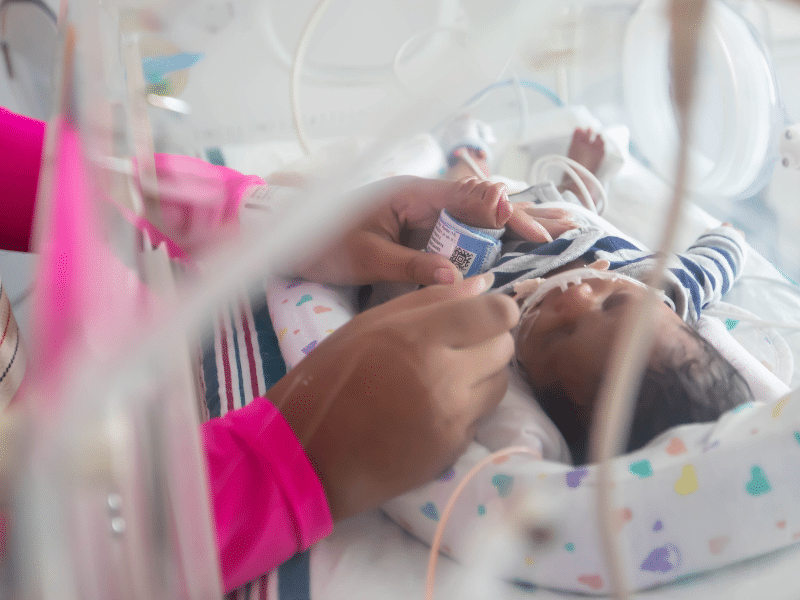 When COVID-19 descended on Portia Hayes’ Jackson home, its first prey were her two preschoolers and the children’s father.

Its next victims were Hayes and her unborn, barely viable baby boy.

“It just came suddenly,” said Hayes, 31. “I couldn’t keep anything down. I had a cough that wouldn’t go away. I tried tea, mucus medicine, cough syrup. It would not go away.”

She got tested. “They said I had COVID pneumonia,” Hayes said. “But in two days, it went from bad to worse.”

Hayes was admitted to a Jackson-area hospital, “but they said they didn’t have the equipment to support me and my baby,” she said. Hayes was transferred to the University of Mississippi Medical Center, which has cared for many other transferred patients throughout the pandemic when the hospital they were in lacked needed expertise, capacity or both.

Hayes’ memories of weeks in UMMC’s Medical Intensive Care Unit on a ventilator are blurred.  She doesn’t remember how, time after time after time, her condition was so dire that her caregivers thought they had lost her.

What she does remember is the realization, as she struggled to separate vent-induced dreams from reality, that her baby was no longer in her womb.

Hayes became Dr. Rachael Morris’ patient after her June 2 transfer. “She came from their ICU to ours, in respiratory failure. She was rapidly deteriorating,” said Morris, an associate professor in the Department of Obstetrics and Gynecology. “They wanted her to have a higher level of care and a maternal-fetal medicine specialist.”

“I was deteriorating before their eyes,” Hayes said. “They said I’d have to go on the vent. I signed a paper, just in case they had to deliver the baby while I was on the vent.”

“We put her on high-flow oxygen, and like in most COVID patients, there’s a progression from high flow, to continuous bipap, to intubation,” said registered nurse Steve Donnell, one of her MICU caregivers. “She went through all the steps.”

Hayes’ baby was barely 26 weeks. “Because of her gestational age, the goal was to treat the mother and monitor the pregnancy very carefully to allow the fetus to continue to develop,” Morris said. “If you deliver the baby of a sick mom at 32 or 34 weeks, it can sometimes help the mother from a COVID perspective, but at 26 weeks, it does not help the mother.”

Hayes received “all the typical medications – aggressive steroids and antibiotics – but unfortunately continued to have an unstable course, and the fetus began showing signs of distress,” Morris said.

At 26 weeks and five days, Dr. Elizabeth Lutz, an associate professor in Obstetrics and Gynecology, made the call to deliver baby Jediah via an emergency C-section. “They got her (Hayes) loaded up and ready to go to the OR, and she started tanking,” Donnell said. “They brought her back here and did it at bedside.”

“Her progression of respiratory failure was so fast, despite everything we were doing. She was so critically ill that she wasn’t able to support the growth of the fetus,” Morris said. “She was requiring such large amounts of oxygen that she literally couldn’t be moved from the ICU to the OR. Our OR and labor and delivery teams came to her.

“She and baby were both dying. That’s how dire the situation was,” said MICU registered nurse Matt Harris. “If you can’t keep mom’s oxygen up, the baby suffers.”

“I’m not sure how she survived the delivery,” Morris said.

Of about 300 pregnant moms infected with COVID-19 treated at the Medical Center since the pandemic’s beginning, seven have died. Several of the babies have been stillborn, Morris said. The majority of those mothers were moved to the OR for delivery, but in some cases, the mother is too critically ill to move, and the delivery must take place in the ICU.

“It is devastating to watch these mothers endure this morbidity and the critical nature of this disease,” Morris said. “To lose them to the same illness, over and over again, is an impossible burden.”

Born weighing about two and a half pounds, Jediah was whisked to the neonatal intensive care unit in the Kathy and Joe Sanderson Tower at Children’s of Mississippi, about a five-minute walk from the MICU.

Hayes’ struggle was far from complete.

“When they get so bad that even on the vent they are having complications holding their oxygen stats up, we paralyze them. We prone them,” Donnell said. “She pretty much got the maximum we can give a patient who is in the worst stages of COVID.”

“She continued to have a very rocky and unstable course,” Morris said. “She was in septic shock. She developed pericarditis, a known complication of COVID. She had acute kidney injury. She developed a blood clot. She had every complication you could possibly have from COVID.”

Hayes remembers horrifying nightmares, and how she couldn’t communicate her desperation.

“I dreamed that my baby was in my pillowcase, and that I was smothering him. I was trying to tell them, ‘Please, check my pillow!’ I thought the doctor had put my baby in the pillowcase, and I started trying to pull my tubes out and tear at my dressing to get to my baby. They thought I was crazy.

“I couldn’t tell what was unreal, and what was reality.”

“She almost died seven or eight times,” Harris remembered. “She got worse and worse.”

And then unexpectedly, she began turning the corner.

“Once we got her respiratory issues under control, we cut her sedation off, but she wasn’t responsive,” Donnell remembered. “But then, she slowly started coming around. She gradually followed small commands. Then, the issue became that when she was waking up, she was fighting the vent. Her blood pressure would go up. We had to find a happy medium of keeping her sedated just enough.”

Her medical team performed a tracheostomy on June 22 after being unable to wean her from the ventilator. A tracheostomy is an opening created in front of the neck so that a tube can be inserted into the windpipe to help a person breathe.

“We could have lost her at so many different intervals,” Morris said. “But, the best multidisciplinary care and the highest levels of care that exist were offered to her, and she persevered.”

Hayes went to a regular hospital floor July 9, but not before seeing Jediah for the first time.

“Her baby was a month old and hadn’t met his mama yet, so that was the goal,” Harris said. The MICU and NICU teams coordinated to arrange a visit to the NICU, but it was complicated by Hayes’ weakened condition and the oxygen she required.

When getting her stretcher and equipment into an elevator proved too cumbersome, Harris and the team came up with a safe plan B. With plenty of assistance, “she hopped out of that stretcher and into a wheelchair. It was the first time she had been out of the bed,” Harris said. “She said, ‘Let’s go!’ She was determined.”

“I couldn’t believe he was here. He was so small and fragile,” Hayes said of her first glimpse at Jediah, whose weight had almost doubled by the end of July. “I was so scared to hold him.”

On July 19, Hayes transitioned to physical and occupational therapy at Methodist Rehabilitation Center.

Although Hayes’ prognosis is promising, pregnant moms coping with COVID-19 is a continuing concern for Morris and her team. Morris and Dr. J. Martin Tucker, chair of Obstetrics and Gynecology, feel so strongly about educating women on the COVID-19 vaccine’s safety that they made a video to underscore its importance.

“I told a mother this morning about the vaccine,” Morris said. “The mom said to me, ‘It all seems so new.’ I was very honest with her and said that morbidity and mortality for pregnant moms is not new.

“If patients could see what I see, they’d have no question as to whether they need the vaccine. The fear is in the wrong place. The fear needs to be fear of the virus, and what it can do to you.”

On July 30, the American College of Obstetricians and Gynecologists, or ACOG, and the Society for Maternal-Fetal Medicine, the two leading organizations representing specialists in obstetrics care, recommended that all pregnant women be vaccinated against COVID-19. Tucker serves as ACOG’s president.

“ACOG encourages its members to enthusiastically recommend vaccination to their patients. This means emphasizing the known safety of the vaccines and the increased risk of severe complications associated with COVID-19 infection, including death, during pregnancy,” Tucker said in an ACOG news release.

Given what she knows now, would Hayes have gotten the vaccine? “Yeah,” she said. But, she still has qualms.

“I held off and didn’t get around to it,” Hayes said. “With it not being FDA approved, that was a problem to me. It scared me. And, you can have the vaccine and still get sick, and I’m seeing people having adverse reactions.”

“How many other mothers do we have to lose? We have an explosion of cases, and we are largely unvaccinated in Mississippi. A pregnant woman is no exception. The thought that it won’t happen to you needs to stop,” Morris said.

“I have another patient, right now, at about the same gestational age, fighting for her life who is not vaccinated. We are doing everything we can, with large teams of people, and it might not be enough. I don’t get to control that.