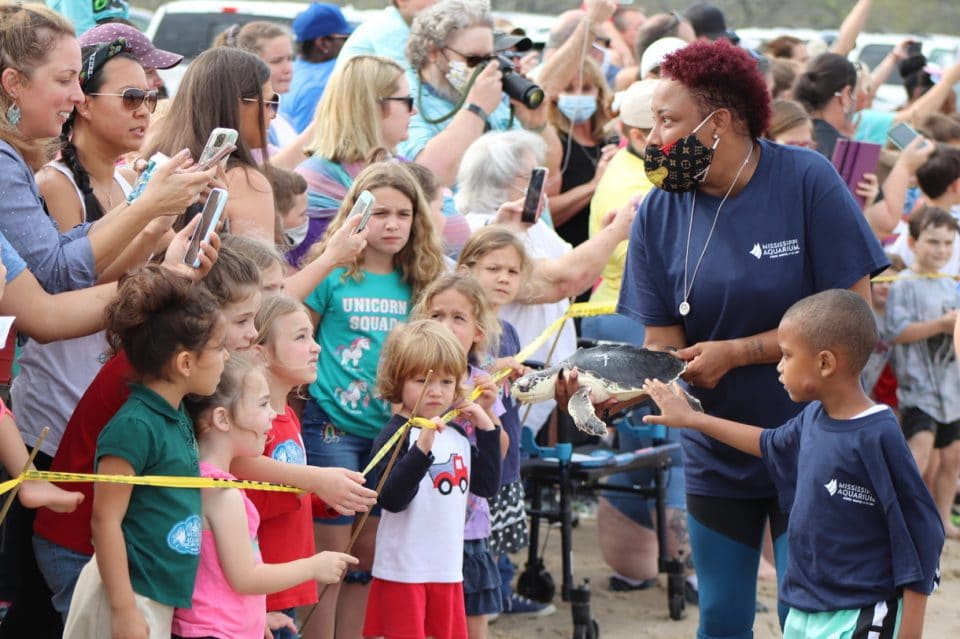 The Mississippi Aquarium will release 7 endangered Kemp’s Ridley Sea Turtles into the Gulf of Mexico Thursday afternoon (June 24th) at 5:30pm, and the public is welcome to attend.  The Aquarium staff will release the turtles near Ken Combs Pier at Courthouse Road and U.S. Highway 90.

Several cold-stunned Kemp’s Ridley sea turtles were transported in December to the Aquarium by Turtles Fly Too, a conservation group based in Boise, Idaho. The endangered turtles needed veterinary care and rehabilitation after being stranded along the eastern coast of the United States.  The turtles, initially rescued by New England Aquarium and Marine life Center, needed time and medical attention, but the northeast facilities were at capacity.

The last batch of the rehabbed turtles will be released Thursday.

“When we received the turtles, they had severe pneumonia,” Alexa Delaune, DVM Mississippi Aquarium Vice President of Veterinary Care said. “But now, these turtles are once again healthy, and we will release them back into the Mississippi Sound. The veterinary team is excited that the last seven Kemp’s Ridley sea turtles are ready to be released from rehabilitation. It was an honor to take care of these endangered species over the last few months. Nursing them back to health has been incredibly rewarding. We watched them change from sick, skinny, dehydrated turtles on arrival to active and healthy turtles today. We are excited to share the release with our community and thank everyone for their support of our work.”

Mississippi Match 5 jackpot is at $445,000 for tonight’s drawing