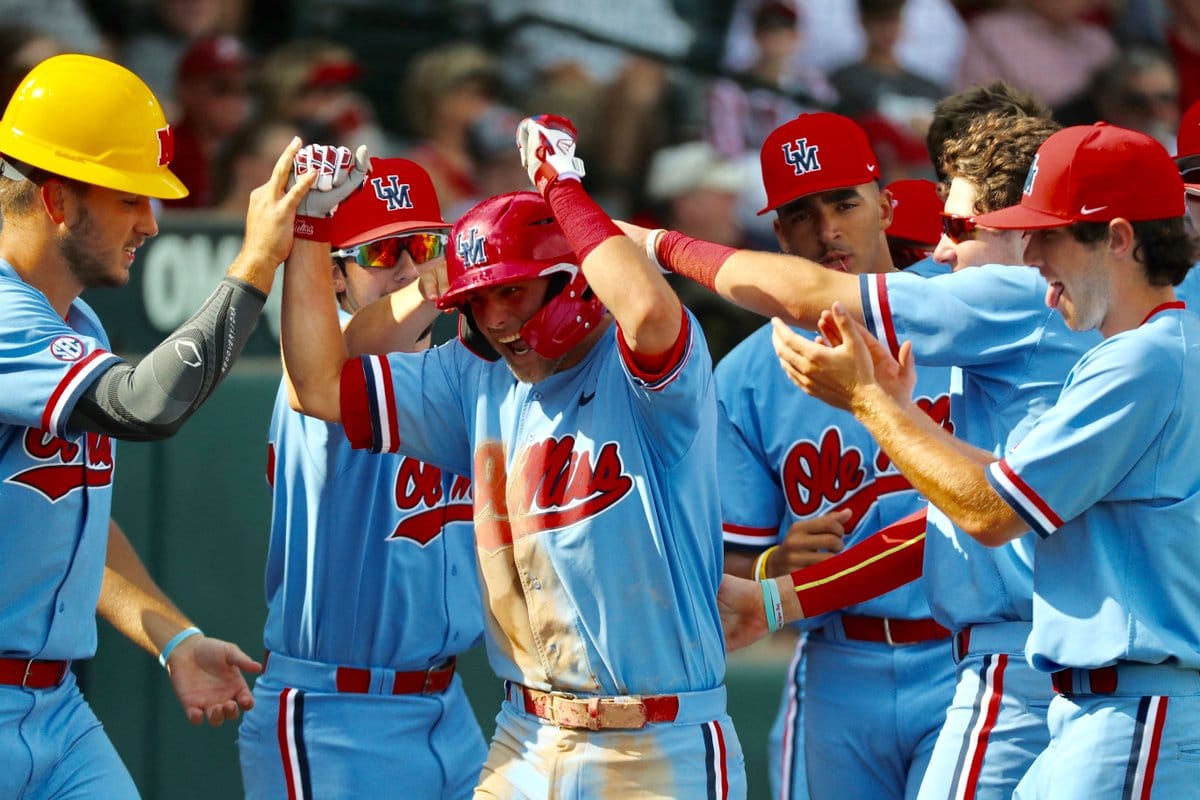 FAYETTEVILLE — Nestled between the visiting bullpen and the scoreboard just beyond the wall in right-center field at Baum-Walker Stadium, the American flag flapped as the wind blew, waving away from the concourse and the fence.

The wind blew out and the ballpark resembled a launch pad. Ole Miss prospered in the conditions. The Rebels belted four home runs in an emphatic 13-5 win over Arkansas to keep their season alive for another day, forcing a decisive game three on Monday.

A misplayed pop up between Cole Zabowski and Jacob Adams in the first inning cost starter Doug Nikhazy two runs in the form of a Dominic Fletcher home run two batters later. But Zabowski wasted no time making amends for the gaffe. In the bottom half of the first inning, the junior first baseman demolished a belt high changeup — one that Razorback starter Conner Noland intended to deposit down on the outer half  — well over the right field wall for a towering three-run home run in the first inning to put Ole Miss in front 3-2.

“He likes to throw the changeup and the breaker. I was just trying to see him up,” Zabowski said. “I am just trying to hit the ball hard. The good part about the wind blowing out is that if you miss it a little bit, it can still go.”

Zabowski’s blast didn’t need the aid the wind provided and it foreshadowed the barrage to come. Cooper Johnson ejected Noland from the game two pitches into the second inning when he struck an opposite-field, solo-shot into the right field bullpen. Noland’s successor did not fare much better. Right-hander Kole Ramage walked the bases loaded for Tyler Keenan, who belted a bases-clearing, 3-RBI triple that highlighted a five-run second frame as the Rebels’ lead swelled to 8-2. Keenan was 2-for-5 with 4 RBI. He clobbered a solo shot to right field in the sixth.

This game featured two of the most potent lineups in college baseball. Arkansas hammered Ole Miss in game one in an 11-2 win in which it terrorized the Rebels’ ace Will Ethridge. It attempted to do the same to Doug Nikhazy. The Razorbacks pushed him to his limits but Nikhazy did not wilt. This was not close to his sharpest outing. He was not armed with premium command and made his fair share of mistakes. But he scrapped for five innings, allowing five runs on 10 hits with eight strikeouts and a walk.  He stranded the bases loaded in the third inning and left two more on base in his fifth and final frame with a pair of strikeouts. Nikhazy broke the school record for strikeouts in a season, surpassing Drew Pomeranz with his 82 punch out of the year.

“Just a really gutsy performance,” head coach Mike Bianco said. “That is why he is so good. There are days where maybe he is not as sharp stuff-wise, but he is able to make a pitch and get off the field. That is what he did today.”

The two jams Nikhazy escaped in the third and fifth innings significantly impacted the trajectory of the game. In the third inning, The Razorbacks were recovering from the five-run blow Ole Miss issued. He hit a leadoff batter Trevor Ezell, a dangerous way to begin his second trip through a daunting top portion of the Arkansas order, and allowed two singles to Matt Goodheart and Dominic Fletcher. He froze Heston Kjerstad in an eight-pitch at bat and induced a pop up from Jack Kelley.

“Kjerstad is a really good hitter,” Nikhazy said. “He has so much bat control and he was just kind of poking everything. Eventually, we decided to throw the ball away and see if he will chase at it. The ball kind of cut back over onto the plate and caught that corner. After that, I threw a changeup to get him to pop out.”

Arkansas trimmed the margin to 8-5 with three consecutive two-out doubles in the fourth inning, making Nikhazy’s escape in the fifth even more consequential with the tying run at the plate. Nikhazy struck out the final two hitters he faced to slip out of the pinch. Ole Miss increased its wiggle room with a three-run sixth inning that began with Keenan’s blast to right and culminated with Anthony Servideo legging out an infield single with two outs. It plated two runs.

Grae Kessinger all but put the game to rest with a towering two-run shot in the seventh inning. Kessinger admired his work as the ball sailed into the left field seating. It was the exclamation point tacked onto a win that resembles to the makeup of this team. It’s been echoed often by players an coaches alike that this group plays its best when its back is against the wall. The team won three straight elimination games at the SEC Tournament in Hoover in a run that both changed its season and kept any glimmer of hope of playing at Swayze Field in the postseason alive.

“The mantra to this whole postseason is that we do not know what tomorrow is going to bring,” Nikhazy said. “We have to do our jobs today. We cannot look past today. That is what kept us on our toes. We were never content today. We wanted to keep pouring it on them.”

The run through Hoover and how it changed this team’s attitude is well-chronicled. Ole Miss entered that tournament as a lifeless club waiting to be put out of its misery and left it with a newfound, looser attitude it has adopted for the entirety of the postseason. Zabowski spoke of the trials and tribulations the group has faced throughout the season in molding them for moments like Sunday when a loss spelled the end of the 2019 Ole Miss Rebels. Bianco harped on the resolve of this group and its ability to shirk nerves and enjoy the concept of completing the current challenge at hand.

“They don’t look nervous,” Bianco said. “They look like a team that has won four or five in a row. Somewhere along the line, somewhere in that SEC Tournament we found that. In the most pressure-packed parts of the game, they do play lose and they play with a lot of confidence.”

Ole Miss will enter the decisive game three with fresh bullpen in large part thanks to four scoreless innings of relief from Houston Roth. On a day in which the baseball was jumping out of the ballpark, Roth tamed the Razorback bats and preserved the arms of Parker Caracci and Austin Miller, who have yet to pitch this weekend.

“(Roth) has pitched so well down the stretch for us,” Bianco said. “Today was as good as I have ever seen him against a really good offense.”

The scenario on Monday remains the same. Ole Miss has to win to extend its season. A victory would send the Rebels to Omaha for the second time under Bianco. It would alter the perception of the program as well as how Bianco’s tenure at Ole Miss is perceived. A loss, of course, would end the Rebels’ season and in all likelihood would be the final game for the bulk of the top-ranked 2016 signing class whose core came from Oxford. None of that will be on the forefront of the players’ minds. That’s really what is at the core of this postseason mantra Nikhazy spoke of. Ole Miss has worried less about the impending result and the consequences it will bring, and have instead relished the present moment.

“I bet it is going to be a great baseball game,” Zabowski said. “We are both really good teams. You have seen that the last two days. Tomorrow will be a great game.”

Bulldogs punch ticket to Omaha with 8-1 W over Stanford