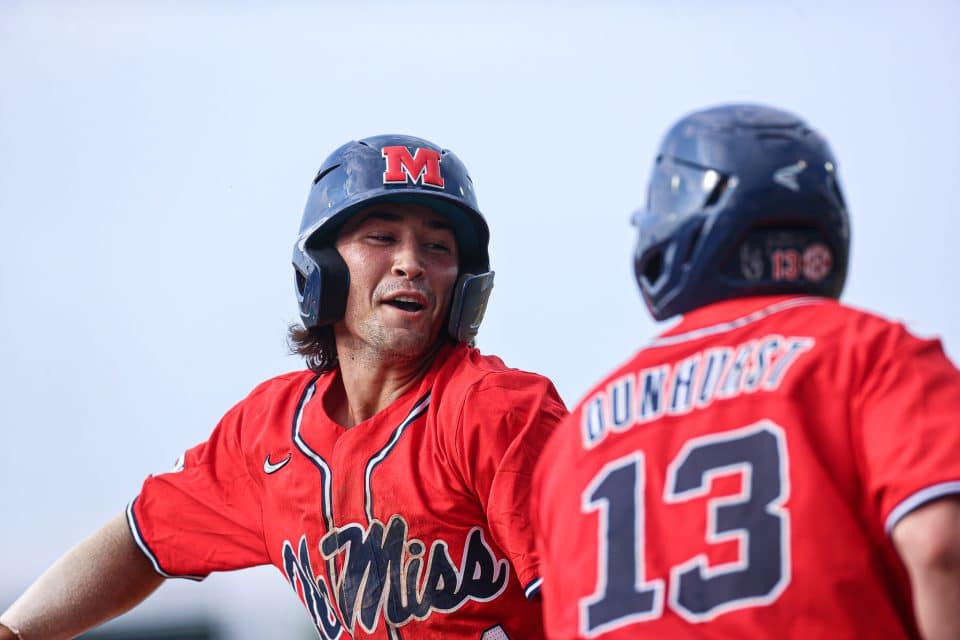 Ole Miss’ path to Omaha has widened as the Rebels have finally hit their stride.

After a rollercoaster of a regular season, the Ole Miss Rebels advanced past a road regional for the first time in Mike Bianco’s 22 seasons as the team’s head coach.

Despite a persistent rainfall that canceled the ability to play games on Friday and most of Saturday, the weather cleared up enough to finish Regional play at Alex Rodriguez Park.

On Saturday night, Ole Miss ace Dylan DeLucia took the mound and proceeded to strike out 12 Arizona batters. A home run hit by Peyton Chatagnier in the top of the eighth inning turned a tie ball game into a 7-4 lead, which subsequently gave the Rebels a victory.

On Sunday, Tupelo native Hunter Elliott gave the Rebels one of the most impressive outings in his promising career. Although he didn’t have his best stuff, the true freshman managed to work his way out of several jams by striking out eight batters and giving his teammates five shutout innings. A stagnant Ole Miss offense found a ray of light late in the game when team captain Tim Elko hit an RBI to score the two needed runs to win the game. Ole Miss outlasted Miami in a 2-1 finish.

The Ole Miss offense looked completely different during game three versus Arizona. While the Rebels struggled at the plate against Miami, they struck on all cylinders in today’s game. Ole Miss dominated the Wildcats in a 22-6 victory. The onslaught of runs was sparked by designated hitter Kemp Alderman’s first career grand slam as a Rebel.

“To watch them get this opportunity and play so well, as a coach, that’s your reward,” Bianco said. “To watch these kids play, and succeed, and sometimes fail, and then pick themselves back up.”

The Rebels were once on the outside looking in as experts, such as Kendall Rogers from D1Baseball, had predicted that they would not make the NCAA Tournament.

Now, the stage is set for Ole Miss to face a familiar foe in the Southern Miss Golden Eagles. The two teams previously faced off in the regular season and the series is tied 1-1.

The winner will advance to compete in the 2022 College World Series held in Omaha, Nebraska.

Midwives and birth centers are essential to improving birth outcomes