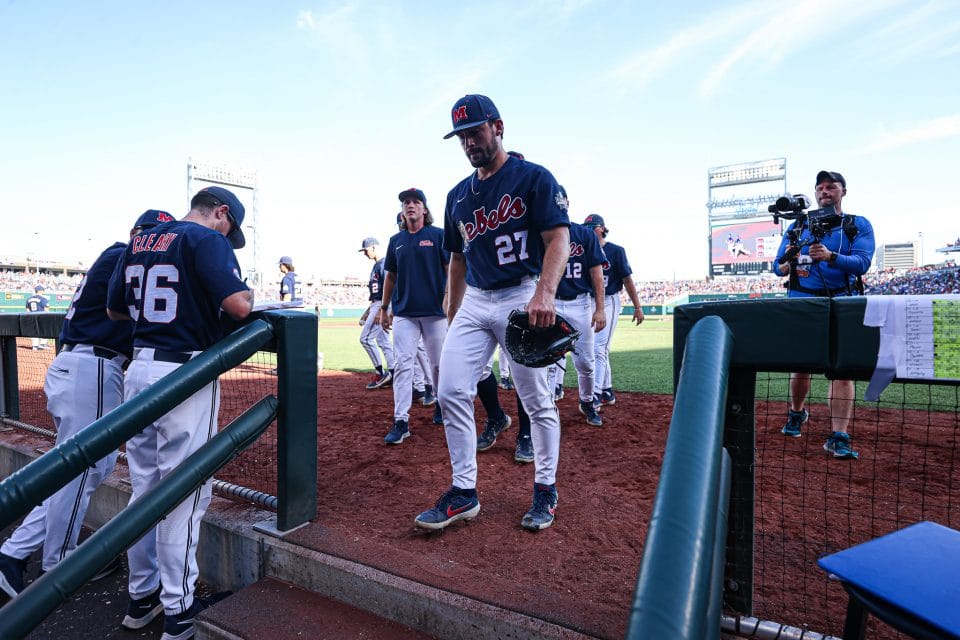 Ole Miss’ postseason win streak comes to an end as the team lost to the Arkansas Razorbacks by a score of 3-2 on Wednesday night.

Both teams’ pitchers began the game with a clean first inning. However, the Razorbacks struck first blood in the top of the second inning courtesy of a home run hit by RF Chris Lanzilli. Ole Miss quickly responded in the bottom of the second inning with a solo shot hit by DH Kemp Alderman to even the score at 1-1.

Nevertheless, Arkansas’ performance on the mound ended up being too much for the Rebels to handle. While Ole Miss had not struggled to hit the ball previously in the College World Series, the team struggled to locate breaking balls thrown by Arkansas’ left-handed pitching.

Ole Miss gave a last-ditch effort in the bottom of the ninth inning. The Rebels loaded the bases with zero outs and an infield single hit by Justin Bench would add a run to the board, but it would not be enough.

While the Rebels lacked offensively, the pitching staff, led by senior LHP John Gaddis, did its job. Gaddis pitched for five innings, allowing only four hits and two earned runs. RHPs Jack Washburn and Jack Dougherty pitched in relief and only allowed one collective earned run.

“Tough one to lose. Heck of a college baseball game. Well played on both sides. Well pitched, ” Ole Miss Head Coach Mike Bianco said following his team’s first loss since the SEC Tournament. “It’s disappointing, bases loaded, the bottom of the ninth and we have a chance to win it, but I would think that for everybody. This is what you play for. This is really cool and you should appreciate the moment.”

Arkansas freshman LHP is credited with the win after giving the Razorbacks five innings, two hits, one earned run, and eight strikeouts.

The winning team will advance to the College World Series Championship.

Thunder & Lightning: Mississippi State Continues To Be Creative in Attendance

Your Mississippi forecast for Thursday, June 23