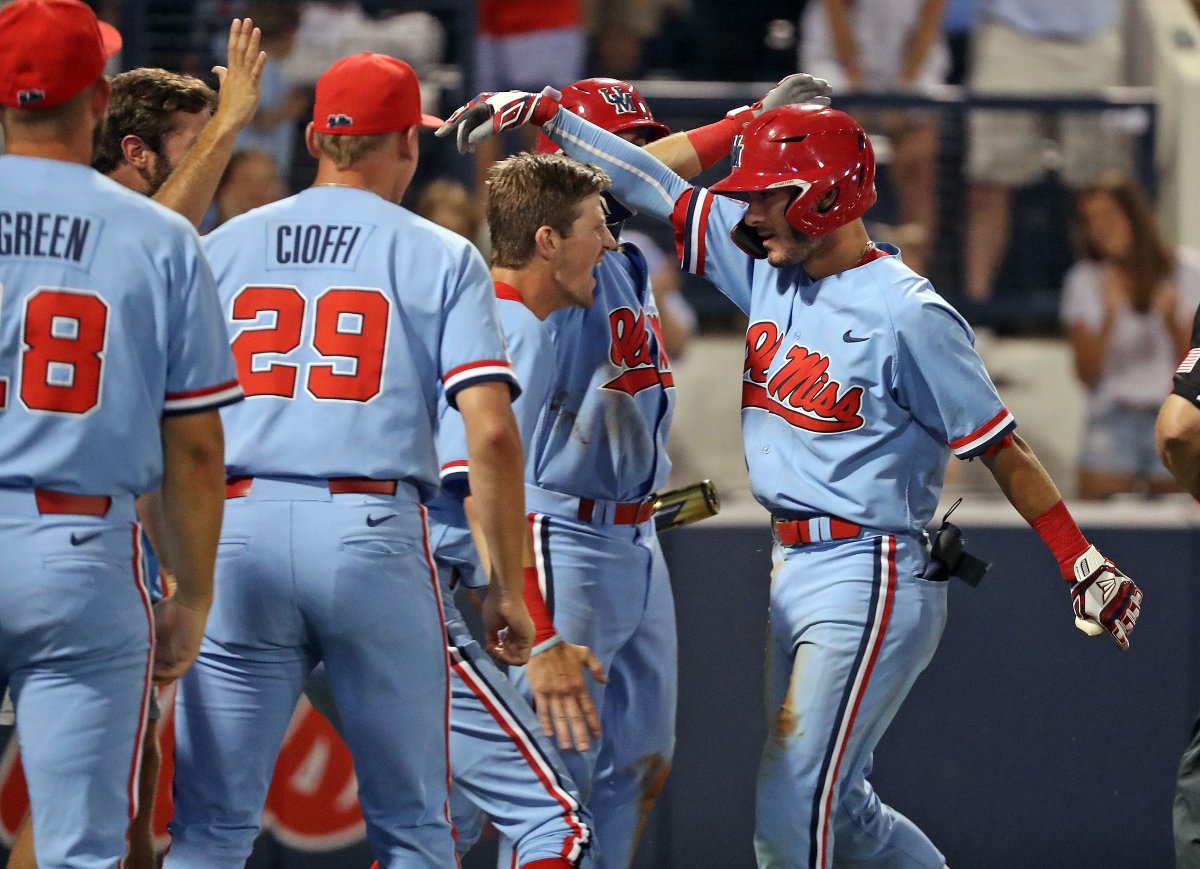 Tyler Keenan watched the baseball soar through the sky as he jogged toward first base, immediately realizing the fate of hanging changeup he’d struck crisply.

The ball cleared the bullpen and the student section in right field. It gave Ole Miss a 4-1 lead in the bottom of the third inning and was emblematic of the bludgeoning the Rebels unleashed on Jacksonville State’s pitching staff in a 16-2 victory to advance to the winner’s bracket game of the Oxford Regional on Saturday.

Keenan’s status for this game was in question after he suffered a sprained shoulder last Sunday in an 11-10 loss to Vanderbilt in the SEC Tournament championship game. An MRI came back negative and Keenan participated in practice on Thursday leading up to the game. Keenan was 2-for-4 on the evening.

“I felt great,” Keenan said. “I knew I was going to play in this game. There is no way I was going to miss it. That ball felt really good off the bat.”

“One of the things that will get lost in this because we got 15 hits and hit three home runs is that we walked seven times,” head coach Mike Bianco said. “I thought we did a good job against Farmer laying off some changeups. I think he threw more changeups than we thought he would. We thought he’d throw more curveballs to the left-handers and even to some of the right-handers. Our guys did a great job laying off those pitches.”

A five-run fifth inning spelled a sour ending to Farmer’s rocky evening, and it could’ve been avoided entirely. The right-hander retired the first two batters of the frame with a pair of lazy fly balls to center field. Cole Zabowski grounded a ball to second base for the what should have been the third third out, but Devin Brown mishandled the ball. The Rebels pummeled Brown and the Gamecocks for the error. Four consecutive two-out hits followed, highlighted by a Kevin Graham 2-RBI double double into the right field corner. After a Cooper Johnson RBI single,  Anthony Servideo took Farmer deep to right field for his second long ball of the season. The five unearned runs ballooned the lead to 10-1.

The Rebels’ offensive onslaught was mirrored by seven innings of two-run ball from Will Ethridge. He required 78 pitches, did not issue a walk and struck out three. Ethridge surrendered a leadoff double to the first batter of the game and it resulted in an early 1-0 lead for Jacksonville State after a pair of productive ground balls snared by shortstop Grae Kessinger. Ethridge proceeded to retire 20 hitters in a row after the double and did not surrender another hit until a pair of two-out knocks plated Jacksonville State’s second run in Ethridge’s seventh and final inning.

“About the sixth inning, I realized I had not given up a hit in a while and was thinking ‘Hey, if I had not given up that double, I would be rolling with a perfect game right now,’” Ethridge quipped. “I just tried to fill up the zone and was able to get a lot of ground ball outs.”

The first-inning Gamecock advantage was short-lived as Ole Miss plated two runs in its first at bat. The first four hitters reached base on a pair of singles from Dillard and Kessinger, and a Keenan walk. Cole Zabowski hit an RBI single that plated a run and Ryan Olenek barely missed a fastball for a deep sacrifice fly to left. Farmer was lucky to escaped with just the two runs of damage as the Rebels gifted him an out with the first of a few base running gaffes on the evening.

Ole Miss matched its five-run fifth with five more in the seventh as the game spun out of control. Thomas Dillard crushed a fastball over the right-field wall for his first home run since May 4 and his first at Swayze field since March 20. Dillard has been a productive hitter for most of the season, particularly so in his newfound leadoff role, but has not driven the ball out of the ballpark at the rate he is accustomed to. He was 2-for-5 with a pair of RBI.

“As much as coaches talk about grinding out at bats and getting base hits, everyone loves home runs,” Bianco said. “Particularly a guy who is accustomed to hitting a lot of them. That will sometimes go further in a multi-hit game. Thomas has been such a force in our lineup. He got moved to leadoff not because he was bad, but because we needed to change something up.”

The production at the plate, coupled with Ethridge’s efficient seven innings, preserved the bullpen aside from Taylor Broadway completing the eighth and ninth innings. That could prove to be significant for Ole Miss on Saturday when it faces Clemson in a game in which the winner will be in the proverbial driver’s seat of the regional. The Tigers are throwing left-handed ace Mat Clarke.

Ole Miss is countering with fellow left-hander Doug Nikhazy, who has been invaluable in stabilizing the Rebels rotation. Nikhazy will have his hands full. The Tigers boast a collective .886 OPS against left-handed pitching, but this Ole Miss team has often been the best version of itself with the freshman on the hill.

First pitch is slated for 6 P.M.