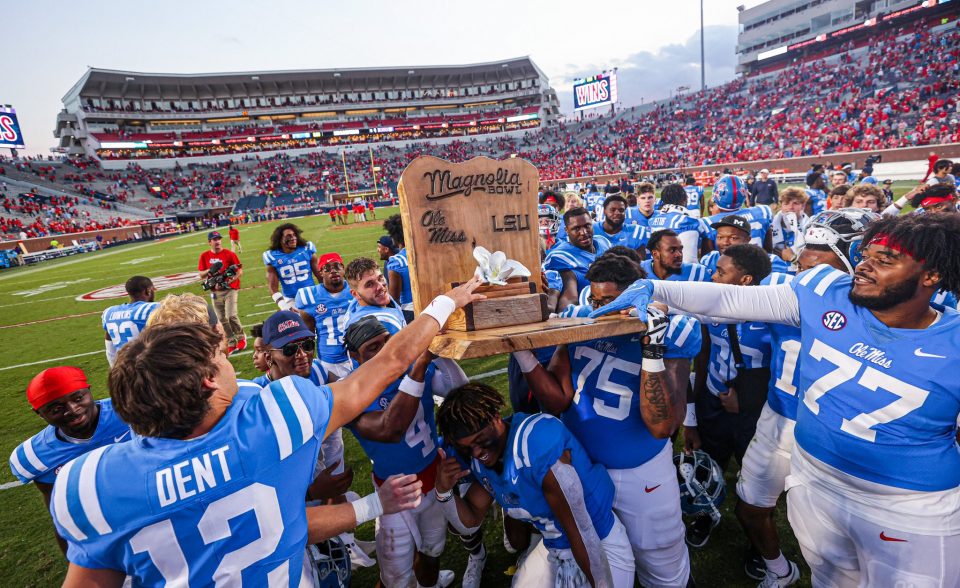 On a day when his iconic number 10 was retired, legendary Ole Miss quarterback Eli Manning was honored in a big way Saturday as the Rebels (6-1, 3-1 SEC) put together a dominant 31-17 Magnolia Bowl victory over the LSU Tigers in front of 64,523 fans, the sixth largest crowd in Vaught-Hemingway Stadium history.

The Rebels finished with a balanced 470 yards of total offense. Matt Corral completed 18 of 23 passes for 185 yards through the air and threw his only touchdown pass to Casey Kelly. On the ground, Snoop Conner led the Rebels with 117 yards on 14 carries while Corral, Henry Parrish Jr. and Jerrion Ealy each scored a rushing touchdown. Dontario Drummond led Ole Miss in receiving with 93 yards on eight catches.

Defensively, Ole Miss forced three turnovers and came up with five sacks between five different Rebels. Mark Robinson once again led the Rebels with 12 tackles, followed by Chance Campbell’s 10 tackles. In total, Ole Miss surrendered a season-low 77 yards on the ground while their offense eventually overcame a slow start.

The Rebels punted their opening possession away and the Tigers took advantage immediately. A 44-yard pass from LSU’s Max Johnson to Trey Palmer set them up to score the game’s first points. Tyrion Davis-Price scored a goal line touchdown to give LSU a 7-0 lead with 8:29 left in the opening quarter.

After Ole Miss went three-and-out on the ensuing drive, the Tigers moved down field once again, but left the field empty handed as Tysheem Johnson intercepted Johnson on a fourth down play, giving Ole Miss the ball at their own one-yard line late in the first quarter. Snoop Conner started the drive with a few authoritative runs to conclude the first quarter before the drive stalled. Caden Costa connected on a 43-yard field goal to make it a 7-3 Rebel deficit, 10:44 left in the second quarter.

LSU proceeded to convert two third downs by means of pass interference and quarterback scramble, but would have to settle for a 55-yard field goal attempt by Cade York. The kick sailed wide right and the Rebels had a chance to take the lead with 6:23 left in the first half. Jerrion Ealy converted a 3rd-and-19 with his legs while Corral found Casey Kelly on the goal line for six. The seven play, 63-yard drive gave Ole Miss its first lead of the game, 10-7 with 3:12 left in the first half.

The Rebels forced a quick three-and-out and had 2:20 left to score. The ball was spotted at their own 20-yard line with one Ole Miss timeout to work with. They succeeded. A 27-yard pass to Drummond and 18-yard pass to Miles Battle allowed the Rebels to take a two-score, 17-7, lead going into halftime with Corral getting a three-yard touchdown with his legs.

The Rebel defense continued their hot streak and forced a three-and-out coming out of the locker room. Their offense continued to remain hot as well, scoring points on their fourth straight possession. Ole Miss capped off a 10 play, 66-yard drive with a five-yard touchdown run by Parrish Jr., giving the Rebels a 24-7 lead with 8:59 left in the third quarter.

Defensively, the Rebels continued to create havoc as Cedric Johnson jarred the ball from Johnson and Jake Springer recovered the loose ball, but Ole Miss would punt shortly after. However, the Rebels would score on their next drive and only needed six plays to do so. Jerrion Ealy broke a tackle and raced 36 yards for the score, giving Ole Miss a commanding 31-7 lead with 2:27 left in the third quarter.

The Ole Miss defense continued to swarm as they stripped Max Johnson a second time. Cedric Johnson fell on the loose ball on LSU’s 43-yard line, but a punt was again the result of it. LSU would have a late charge with Cade York 47-yard field goal and touchdown catch by Garrett Nussmeier, but it was far too late as the Rebels went on to record their third straight victory.

The Rebels will be back on the road Saturday, Oct. 30 to continue SEC play against the Auburn Tigers. Kickoff is set for 6 p.m. CT and can be seen on ESPN or listened to via the Ole Miss Radio Network.

As Halloween nears, fire safety should be top of mind