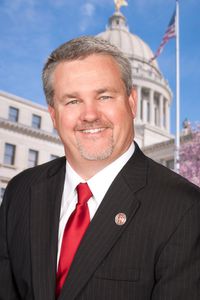 After attaining power over the governor to spend the CARES Act funding received from the federal government, the Mississippi Legislature still has $900 million to disburse and one state representative does not believe distance learning is as big of a priority as some of his peers do.

Representative Charles Busby, who serves District 111, made an appearance on The Gallo Show this morning to talk about how he believes the remaining funds should be approached.

“We have to be conservative as we go forward,” Busby said. “We don’t know what this thing looks like three months from now, so the right thing, I think, is to hold some of that money back in case no other monies come, and we have additional needs in the future.”

Unlike Speaker Philip Gunn and Lt. Governor Delbert Hosemann, Busby does not believe providing technology for distance learning should be an utmost priority.

“I don’t want to set the standard that the state is going to provide a computer for every child going forward,” he explained. “I also don’t want to spend a ton of money on yesterday’s technology in an attempt to get distance learning across the state of Mississippi.”

As the coronavirus continues to spread across the state, industries are continuing to suffer. Thus far, the legislature has set aside $300 million for small business relief but has remained stagnant on the other $900 million.