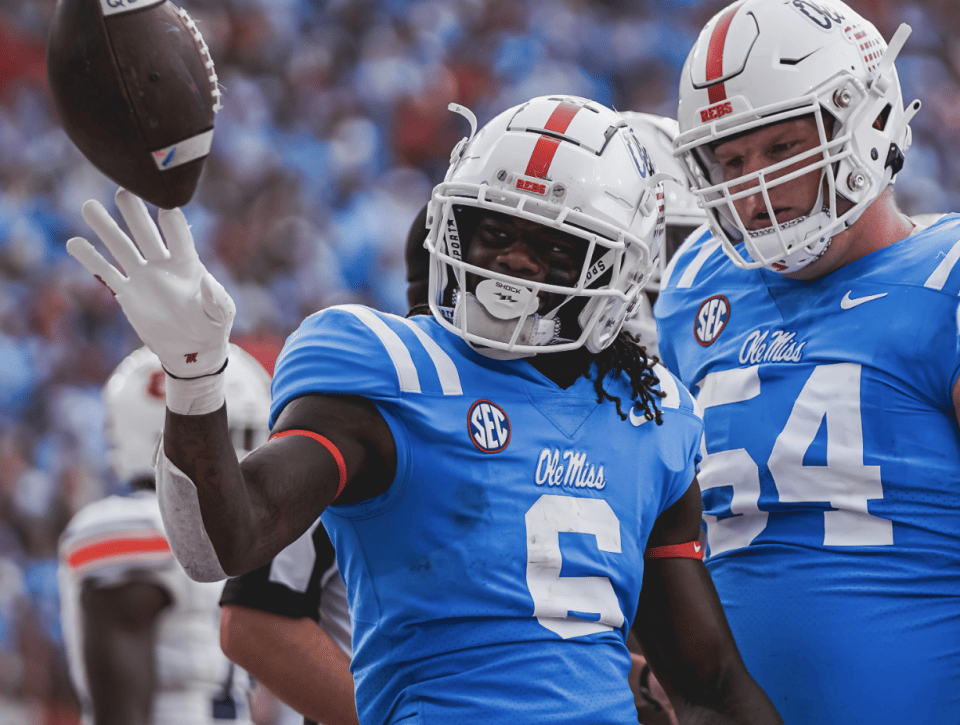 In what was more of a track meet than a football game, the No. 9 Ole Miss Rebels took down Auburn by a score of 48-34 Saturday afternoon.

The two teams combined for 749 yards on the ground – the Rebels accounting for 448 of them. It was the first time since 1976 that Ole Miss had three 100-yard rushers in a single game with Quinshon Judkins leading the way with 139 yards on 25 carries and three total touchdowns. The true freshman out of Pike Road, Ala., now has four 100-yard showings in his first seven college games.

Zach Evans had 136 yards on 21 carries and one touchdown. Jaxson Dart, who finished 9 of 19 passing for 130 yards and three touchdowns, added 115 rushing yards on 14 carries.

For the Tigers, Tank Bigsby had his first breakout game of the season, going for 179 yards on 20 carries and two touchdowns. The preseason All-SEC first teamer was averaging just 2.9 yards per carry against Power Five teams going into the contest.

Lane Kiffin’s Rebels jumped out to a quick 21-0 lead before Auburn clawed their way back into the game with two second-quarter touchdowns. Ole Miss responded with a 7-yard touchdown pass from Dart to Judkins with 2:52 to go in the first half. The Tigers then kicked a field goal right before halftime, making the score 28-17 going into the locker room.

On Auburn’s first possession of the second half, the Ole Miss defense let up a 50-yard touchdown run from Bigsby, and the Tigers pulled within four points 28-24. The Rebels answered with a 23-yard field goal by Jonathan Cruz to take the lead back to seven points.

Then, in undoubtedly the most surprising play of the day, Kiffin called for an onside kick, and the Rebels executed perfectly. In nine plays, Ole Miss marched down the field and Judkins gave his team a two-score lead with his second touchdown of the day.

The Tigers would not go down without a fight as quarterback Robby Ashford found the end zone on an 11-yard run to make the score 38-31 with 2:30 to go in the third quarter.

Cruz kicked a 42-yarder to start the fourth quarter, putting the Rebels up 41-31. Auburn again quickly moved down the field and had first and goal inside the five, but the Ole Miss defense stood tall and forced them to kick a field goal.

Another touchdown from Judkins, this time a 41-yard rush with 6:26 left, looked like the final nail in the coffin as the Tigers have had a recent tendency of wearing down in the final period of play, but a lightning delay of 30 minutes with Ole Miss up 48-34 would provide some rest for both teams.

After the delay, the Tigers found three first downs in a row before Ashford threw a costly interception. A first down from Evans and a quarterback kneel from Dart would give the Rebels their second 7-0 start since 1962, snapping a six-game losing streak against Auburn.

Next up will be an away game against LSU in Baton Rouge, La.