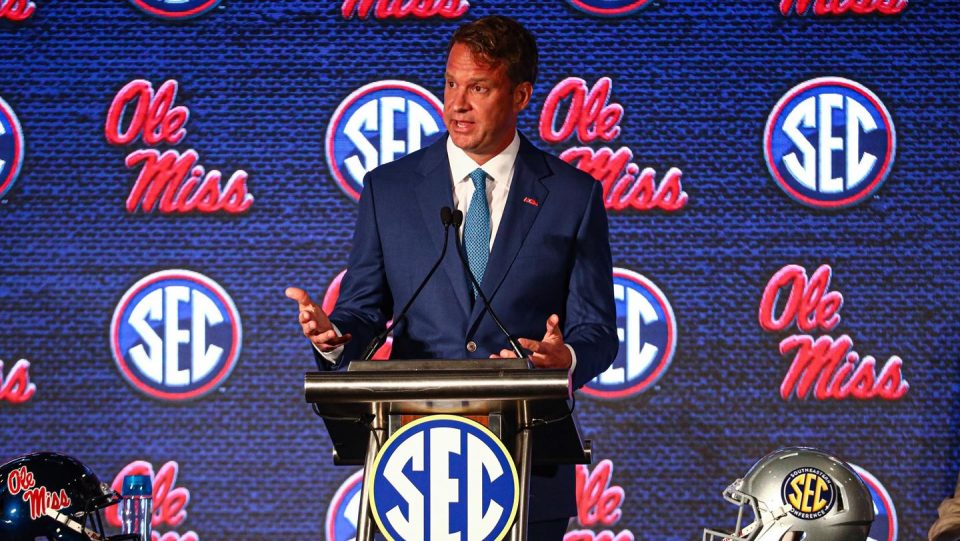 The Rebels took center stage in Hoover this afternoon with SEC Media Days ushering in the sprint toward the 2021 college football season.

Entering year two as the man in charge in Oxford, head coach Lane Kiffin stepped to the podium and offered brief remarks before fielding questions from reporters across the conference landscape.

Following a 5-5 season that ended with a victory in the Outback Bowl, there’s no secret as to what the main concern is in Oxford heading into the 2021 season—fixing what was statically one of the worst defenses in the country.

As it relates to improving on that side of the ball, Kiffin referenced the benefit of a full spring after that portion of the offseason was torpedoed by the onset of the COVID-19 pandemic in 2020. He would later stress that the return of non-conference games should allow for more players to get reps early in the season.

While the defense returns nine starters from a season ago, several new faces could see significant playing time in 2021, including Maryland transfer LB Chance Campbell, two JUCO transfers on the defensive line and a recruiting class that emphasized filling needs throughout the unit.

Offensively, Kiffin should feel much more confident with 48 days until the Rebels take the field against Louisville in Atlanta. Quarterback Matt Corral returns after leading the country in yards per game in 2020 and is receiving plenty of hype ahead of the upcoming campaign. While the head coach noted that his quarterback played “as well as anyone in the country at times,” there is room for improvement.

“He’s done a great job from a leadership standpoint. He’s a very confident kid, so we’ve got to get him to play more consistent because, like we said, he played great at times and he played really poorly at times,” Kiffin said referencing the Arkansas and LSU games. “I think a lot of people forget with that too that it was his first year as a starter, so we know what to build off and we know what it should look like.”

Asked about his decision to stick with his guy after the seven interception game against the Razorbacks, Kiffin discussed the dangers of shaking a quarterback’s confidence.

Corral will be without his top weapon from a season ago as record-breaking wideout Elijah Moore is now donning the green and white of the New York Jets. While no one can fill Moore’s shoes, the Rebels’ receiver room won’t lack talent as returning veterans Braylon Sanders, Dontario Drummond and Johnathon Mingo will lead the way with new faces joining them in the rotation. Kiffin did mention the possibility of moving running back Jerrion Ealy around the formation and that John Rhys Plumlee is also “in the mix.”

Kiffin was also asked about his aggressive play-calling style that saw the Rebels go for it on 33 4th downs—the 2nd highest in the country. He mentioned that while analytics play a key role in that, there are also several other factors that go into those decisions.

“I think part of that is analytics and just understanding how games are going. Again, when you follow it and then if you have a team, like we were, when we were a lot better on offense than defense a year ago, you’ve got to be really aggressive, and you’re aggressive in your game plans.

Whenever Kiffin is in front of a room of reporters, questions about Alabama’s Nick Saban always follow and today was no different. The former Alabama offensive coordinator had nothing but praise for his former boss and was left in utter disbelief when he was told that Bryce Young, Alabama’s freshman quarterback, has made nearly $1 million from name, image and likeness deals.

“The guy’s made $1 million already?… That’s good man, he doesn’t need to play next year against us then,” Kiffin joked. “That’s mind-blowing.”

Corral joined SportsTalk Mississippi in Hoover to discuss his preparation for his junior season and the expectations inside the program.

‘Talking season’ continues in Hoover Wednesday with Mississippi State set to join the party, but the Rebels can now turn their attention to camp as they get set for their season that begins in Atlanta on September 6th in primetime.