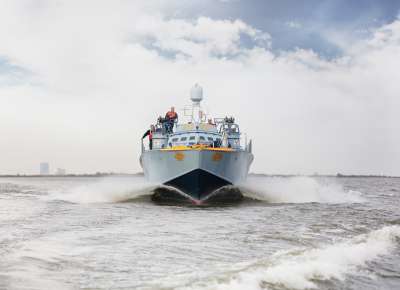 The National WWII Museum in New Orleans is bringing a PT-305 to the Gulf Coast this weekend.

A PT-305 will dock in the Bay St. Louis Municipal Harbor. It’s the only fully-restored and operational combat-veteran patrol-torpedo boat in existence. Deck tours will be available, but the boat is not ADA accessible and guests must be eight years or older.

$10 for children and military

According to the National WWII Museum, the  PT-305 was manufactured by Higgins Industries in New Orleans. The keel was laid down on March 30, 1943 at the City Park Plant. She was launched on May 27, 1943 and completed at the Industrial Canal Plant on December 8, 1943.

For the American Navy the PT boat was a critical asset in the days after Pearl Harbor when the United States was short on larger vessels and facing an onslaught of attacks from the Japanese. The actions of PT boat crews in the Philippines and Solomon Islands represent an outstanding example of the American Spirit in action.

As the war progressed and America was able to mobilize more forces, the role of the PT boat shifted from attacks on capital ships to operations in coastal waters. PT boats slugged it out toe to toe with Japanese armored landing barges and German Flak lighters. Flak lighters or F-lighters were heavily armed and armored barges used by the German military to move men and material in coastal areas.

MTB RON 22 operated in the Mediterranean along the coast of Southern France and Northern Italy. Boats from Ron 22 participated in the Invasion of Elba on June 18, 1944, where PT-305 sank a German Flak lighter.

The squadron acted as a diversionary force in Gulf Juan, and as an anti-E-boat screen in the Nice-Cannes area. Ron 22 was part of Operation Dragoon, the invasion of Southern France on August 15, 1944. They landed French Commandos on the coast of France in preparation for the invasion. The squadron was also involved in action around Leghorn, Italy. To harass the enemy Ron 22 fired torpedoes into harbors between Genoa, Italy and the French-Italian border. On the night of April 24, 1945, PT-305 sank an Italian MAS boat.

In late April 1945, the squadron was returned to the United States to be overhauled in preparation for deployment to the Pacific. The war however ended while the squadron was still in New York Harbor. The Squadron was decommissioned November 15, 1945 still under the command of LCDR Richard J. Dressling. On June 18, 1948, PT-305 was sold along with the rest of the squadron.

PT-305 was modified for work as an oyster boat in the Chesapeake Bay. To save on fuel the three Packard engines which required 100 octane aviation gasoline to operate were removed and replaced with two diesel engines. All of the upper works were removed and a chart house was fitted at the stern. To avoid Coast Guard regulations requiring a licensed Captain of vessels over 65 feet in length, 13 feet of boat was removed from the stern.

PT-305 continued as an oyster boat for many years until 2001, when it was acquired by the Defenders of America Naval Museum in Galveston, Texas. In June 2006, The National WWII Museum was contacted by the Defenders of America Naval Museum about the possible transfer of PT-305. The vessel was transported to the Museum campus in April 2007. With the help of the faithful Higgins boat volunteers, PT-305 has been completely restored to her wartime condition. Everything except the weapons is fully operational.

Its home is now a custom-built boathouse on Lake Pontchartrain, where guests will be able to purchase tours and rides on the boat. See pt305.org for more information.

A rare-breed landrace of cattle delivered to your door.