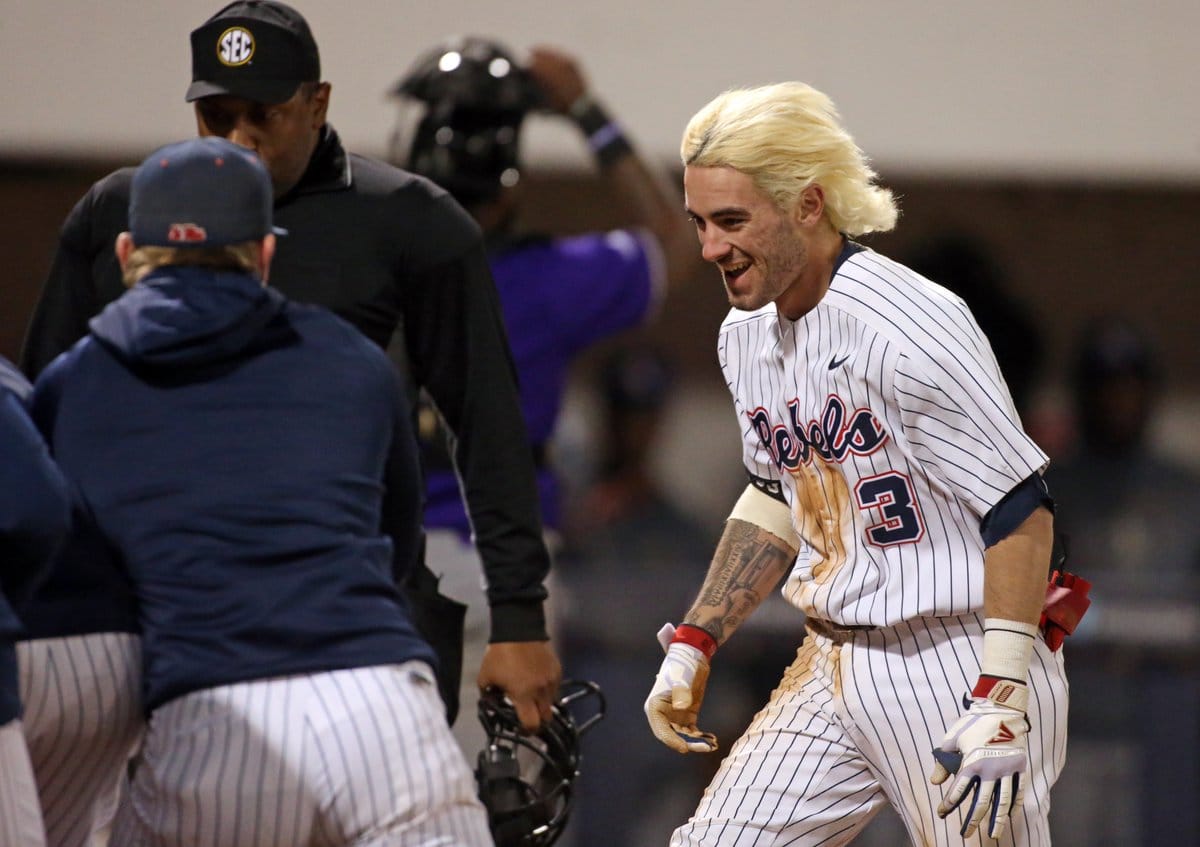 Did Servideo head to the plate in the tenth with intentions of ending it?

“Yeah, I did, to be honest,” Servideo said. “We were hanging around too long. It shouldn’t have gone 10 innings but I am proud of the way the team fought, and we came back to get a win.”

Alcorn State left-hander and Friday night starter Jose Fernandez offered a 1-1 fastball over the middle of the plate and Servideo deposited well over the right-field fence. It was his second home run through four games. Servideo had four home runs combined in the previous two seasons and is now 8-15 to begin his junior campaign.

“We are always on him about gaining weight,” head coach Mike Bianco said. “But I will tell you what he is, he is a tremendous baseball player with good bat speed. He is not a big guy, but he has a quick bat and he is swinging with more freedom. I feel like that is the biggest thing.”

The Braves out hit Ole Miss 14-8, but also committed four errors and walked nine men as the Rebels slogged through their first midweek bout of the 2020 season. Alcorn State was spotted an early 4-0 cushion due to the struggles of starter Greer Holston, who allowed four earned runs on three hits and did not record an out.  The first five hitters reached base on a walk, three consecutive base hits and another walk.

“Just tough,” Bianco said. “Not his night. He has pitched so well in the fall and in the preseason. Sometimes it happens. You get off to a bad start and it is not your night.”

Holston was relieved by Taylor Broadway, who struck out three of the four hitters he faced in the frame, but gave up another base hit that plated the final run Holston was on the hook for.  Broadway tossed three scoreless innings and scattered three hits.

Ole Miss tied it with a pair of runs in the second and third innings. Knox Loposer homered in the second and Tyler Keenan followed suit in the third. The Rebels took at 6-4 lead in the sixth, but Alcorn State hit back-to-back long balls off Logan Savell and Austin Miller in the seventh to tie the game. Ole Miss had a shot to end the game in the ninth, but the Braves plated a run on a walk and an infield single down the first baseline. Braden Forsyth allowed the run in the ninth but tossed a scoreless 10th inning that set the stage for Servideo’s blast.

“I liked the way Braden hung in there,” Bianco said. “Obviously not a great night for him to give up the lead in the ninth, but hung in there and gave us a chance to win the game.”

This wasn’t the sharpest performance by any stretch. The Rebels left 10 men on base and surrendered 14 hits. But Ole Miss survived for a win, one that likely won’t be remembered for how it happened in June. A loss would’ve been a different story, as well as an RPI hit.

The Rebels host Xavier in a three-game series beginning on Friday evening. First pitch is slated for 4 P.M.

Beware of scammers in wake of flooding

Mississippi State Grinds Out a 79-76 Win Over South Carolina