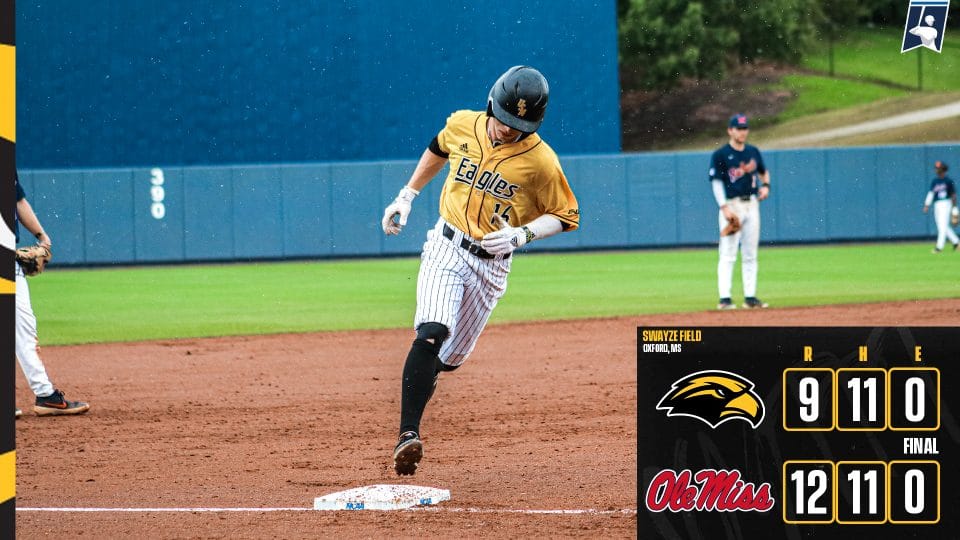 The Golden Eagles, which registered a 40-win season for the fifth-straight full slate, completed its season at 40-21.

Ole Miss (44-20) scored nine runs over the first two innings to capture the NCAA Oxford Regional as they got two-run homers by Peyton Chatagnier and Justin Bench, their fifth and seventh respectively, and then Tim Elko extended that lead to 9-0 with a grand slam which followed Kevin Graham RBI single earlier in the frame.

The designated visitor, Southern Miss, cut into the lead in the third. After a two-out single by Montenegro for his Southern Miss best 21st-hit in NCAA tournament, Reed Trimble hit a two-run homer to cut the gap to 9-2.

After Elko blasted another homer, his team-leading 17th which was a solo shot in the fourth to make the score 10-2, Southern Miss rallied for five runs in the fifth on three home runs.

Blake Johnson opened the fifth with his second homer of the regional and third of the year, before Trimble and Reece Ewing each added two-run shots of their own. It was the team-best 17th for Trimble and sixth for Ewing.

The Rebels completed their scoring in the bottom half of the frame on a two-run homer by Calvin Harris, his second of 2021.

The Golden Eagles closed the gap with two more runs in the seventh on back-to-back homers by Danny Lynch and Will McGillis – their 12th and 11th, respectively.

Despite giving up the homers to Lynch and McGillis, reliever Doug Nikhazy registered the victory for Southern Miss to up his record to 11-2.

Southern Miss starter Ben Ethridge suffered the loss to fall to 6-2 as he gave up four runs on four hits over an inning of work.

The Rebels move on to the Super Regionals, where they will play at No. 5 seed of the tournament Arizona this weekend.

Six Southern Miss players, Blake Johnson, Christopher Sargent, Will McGillis, Danny Lynch, Reed Trimble and Gabe Montenegro, all made the Oxford All-Regional team. Here is the who team below: